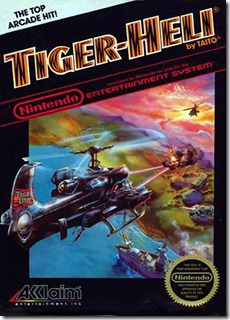 I bet PETA was enraged at this title.

Tiger-Heli is the first game developed by the now defunct Toaplan (and published by Taito), and originally was an arcade game with a great deal of popularity in Japan. Acclaim later published a port of the game onto the NES. Surprisingly the NES port is incredibly faithful to the arcade game, though this is because the arcade version lacked any sort of story so all they had to do was redo the levels for playability on the NES. I personally have a fondness for this game as it was one of the games I played in my younger years that I thoroughly mastered, and yet I can’t seem to get the knack for it now. (╮°-°)╮┳━┳ ( ╯°□°)╯ ┻━┻ 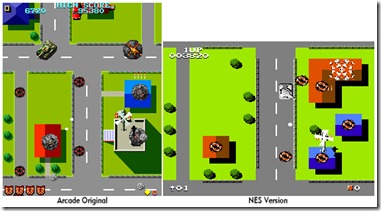 Anyhow The game is fairly simple an straight forward, you play as a helicopter pilot who is tasked with destroying the opposing enemy forces who for some reason lack any air support. Tiger-Heli consists of only 4 stages and upon completion…

The game repeats only harder. That’s right this game theoretically never ends until you run out of lives. This game is a pick up and drop shooter, you can come to it at any time and you can even play other games instead of it; Tiger-Heli will never get jealous.

The controls are simple, you can move in eight directions to any point on the screen, you also have at your disposal an unlimited supply of missiles and a limited supply of bombs. The missiles are your standard weapon thoroughfare that can be upgraded by grabbing floating you receives periodically so that’s pretty normal; it’s the bombs where things get fun, the bombs will destroy everything on screen (including enemy shots!) so if you use them right you can get through stages pretty easily. Another weapon you can find are these tiny helicopters which come in two flavors Grey, which shoot forward with the same attack power of your current missile attack, and Red which fire sideways with the same attack power of your current missile attack. Both mini-helicopters can take a hit for you serving as both an additional weapon and insanely enough, body armor. 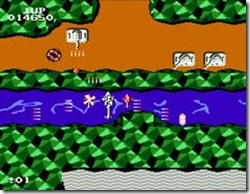 They will totally die for you, that’s FRIENDSHIP!

The enemies in the game are tanks, artillery and battleships peculiarly enough the enemy forces have no planes or jets or anything. Don’t let this lack of aerial attackers fool you, the enemy tanks will give you more trouble then anything else, as they don’t play games. Enemy tanks will fire on you the moment you are in their sights and will not rest until they are off screen or destroyed, the same goes for the Artillery and Battleships though unlike tanks they cannot move. 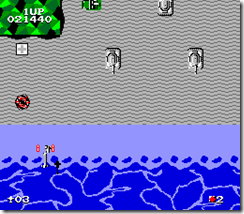 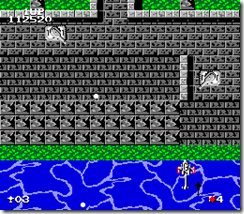 They will not hesitate to murder you.

The game is incredibly simplistic and as such doesn’t require to much investment, it’s a play and put away game, which is for the most part one of its most endearing traits. Tiger-Heli is in my humble opinion one of the best top-down shooters for the NES I’d say its only possible rivals are that of 1942 and Skyshark. For those who like shooters, and people who especially like games that can be picked up and played without an assault of story this game is definitely for you. The best part has to be that the game is relatively inexpensive, so grab a copy! 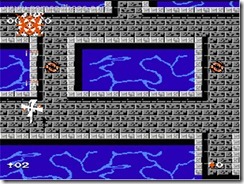 I love the smell of 8-bit explosions in the morning.