A Nightmare on Elm Street (NES) 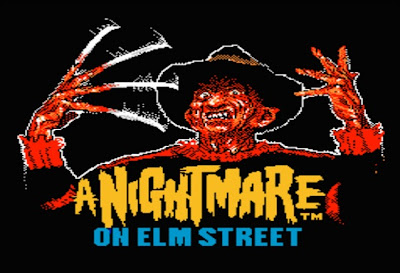 As mentioned in the Ducktales review - tv and movie license games usually suck. There are a few exceptions, but more often than not they don't cut the muster. At the same time, the game company LJN has a reputation for relatively substandard games as well (nearly half or better of which are also movie licenses.) Ever played Karate Kid? Jaws? Back to the Future? Or, get this...Pictionary on the Nes?! They made games that would serve as perfect fodder for internet reviewers like Spoony or the Angry Video Game Nerd to rip apart 20+ years later. So it seems that the formula of LJN + Tv/Movie license = disaster, right?
Well, not entirely. While a great many of those LJN license games feel like they were never playtested (let alone developed by an actual human being,) a few semi decent ones emerged from the cesspool of awfulness. Alien 3? Great game, especially the Genesis version. Friday the 13th? Rough around the edges, a little less than stellar, but still playable and fun on some level. So what is it that separates these games from all of the rest? Why is Alien 3 a better game than Who Framed Roger Rabbit? Is it our own personal sense of nostalgia? After all, the Friday the 13th game still has a pretty nasty reputation. Possibly. I think the most likely scenario is the "broken clock is right twice a day" adage.
That's where 1990's "A Nightmare on Elm Street" comes in. As the game opens up, we're greeted by a slightly deformed but mostly accurate representation of Freddy Krueger. Let's go ahead and get the graphics out of the way. The attention to detail in sprites and level design are actually quite impressive (especially with LJN's track record.) Your character looks a little blocky and with multiple players there's no variation besides the color of your wardrobe/gender if you have 3 or more - but the graphics are definitely passable. The various Freddy related enemies are pretty well done (Freddy snake ala Nightmare 3, Freddy spiders, the Freddy that pops up when your character slips into nightmare zone and the iconic "1, 2 Freddy's coming for you" music chimes, etc.) Speaking of enemies, I know other reviewers have tread this ground before, but it bares repeating; the non-Freddy related enemies are stock, lazy, and have nothing at all to do with the Nightmare on Elm Street franchise. Bats, spiders and rats I can deal with because you need a handful of stock enemies for padding - but there are centaur like monster dudes that make little sense in a game about Nightmare on Elm Street. Still, the enemies and game sprites are less cheesy than the bullies featured in the fake game in Freddy's Dead. "Great Graphics!" 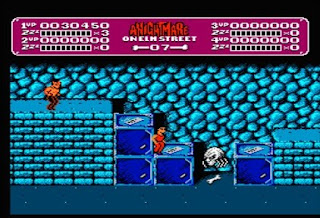 Centaur man? Really?
The music on the other hand is actually well-selected and executed. There are instances where the trademark Freddy music pops up and sounds great in all of its 8-bit glory. The normal in-game music is relatively catchy and I've found myself humming a tune or two on the odd occasion. Perhaps the Freddy Krueger battle scenes have the best music. It's eerie and leaves you with that sort of uneasy feeling that's perfect for a video game. It's a great game for a dark night with the lights off. The atmosphere that the music and sound effects provide is creeptastic and perfect!
With presentation out of the way, let's dig into the heart of the game and one of the central hiccups which is the controls. The controls take a lot of patience to get used to. For starters, you start out armed with only your fist and for some enemies it's effective, but most of the time you'll find yourself getting hit more often than you damage the enemies. It's best to keep jumping and moving - avoiding enemies like the plague. You've got 4 hits per life and you need to keep a firm grip on those hitpoints. Also keep in mind that whenever your hitpoints go down, so does your Zzz's meter (which ticks down on its own, but at a slower rate if you're not taking damage.) When your Z meter reaches 0, you enter nightmare world and while the enemies look cooler and you can sport nifty skills (if you have acquired the groovy power blocks) - the enemies are much harder to kill. Your character's jump would actually work quite well if the pits and gaps weren't so large and the platforms weren't so tiny. You will aim yourself for a moving platform only to find your way straight into the pit Castlevania style. Heck, you may curse the screen - swearing that your pixelly feet hit the platform but you still slid off or missed by a mystery pixel anyway. Jumping is rendered slightly less awkward if you're rocking one of the powerups like the gymnast one (where you can run faster and jump higher - just like Game Genie always promised you.) 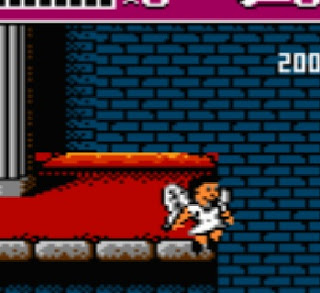 You'll see this a lot. Someone just rang a bell - because this Angel's got wings.
One of the main things that LJN got right with this game is just how similar some parts are to the original film it's based on "A Nightmare on Elm Street 3: Dream Warriors." The dream world aspects of the stages are actually well done. The idea of giant Freddy-head spiders is genuinely frightening to someone who watched all of the Nightmare movies and could actually picture an evil Freddy Spider. There are bosses that borrow from elements of the third movie - particularly the Freddy snake boss that spits tongues at you. Remember when he burst through the wall and started to swallow up Patricia Arquette? Awesome scene. Even the overall plot - collecting Freddy's bones to sacrifice him and send him back to the grave where he belongs is ripped right from the film. Unlike some of the other games where you get the feeling the developers just read the box-cover synopsis from a rental tape of Friday the 13th part 3 - it feels like the game makers were actually fans of the Nightmare series or at the very least were familiar with the source material. 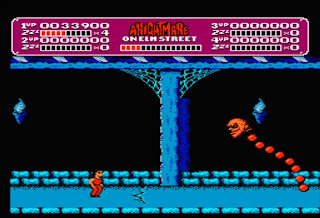 Freddy snake. Well, kind of.
One of the main things dragging this game down are the numerous bugs in the game. No, not the goofy bees and spiders - I'm talking about soul crushing, game wrecking bugs. The most common bug I've run into in this game (and one that I have gotten so many times that I almost believe the game is unbeatable) is that it's often impossible to select the level you need to go to next. I have run up and down through Springwood trying to press UP for every single solitary entrance and could never find a house, church, junkyard, or anything that would actually allow me to enter. Sometimes I get further than others but I don't think I've ever successfully beaten the game. Take that as a challenge, gang! Try to beat this game.
There's two really fun features that make this game stand above some of its otherwise mediocre trappings. First, this game is 4-player compatible. That's right! You and 3 other dream warriors can take your chances against Freddy and try (more than likely in vain) to reach the end of the game. So if you have a Satellite or 4 score (or happen to need one - might I suggest Lukie Games?) then you will be able to enjoy the game much more with a handful of other friends. The second notable feature in A Nightmare on Elm Street are the Dream Warrior powerups. Torn from the plot of pt. 3, you're able to collect bonuses that will allow you to turn into superheroes while in dream world, just like in the movie! Remember the wizard, the gymnast, the ninja...well, ok. No kung fu masters until pt. 4, but you get my drift. Press select when in dream world and set your dream power free! 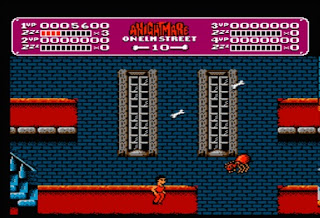 "Now you're playing with Power!"
I would say that the difficulty level is medium. It's often hard to leap over pits without falling to your doom once or twice before you magically find footing on a moving ledge and there are occasional bugs that will render the game unbeatable. The levels also tend to randomize (is it the first house? nope. Second house? uhn uh) Other than that - you really shouldn't have that much trouble with either the various monster baddies or the minibosses. The semi-random Freddy encounters (Freddy's Coming!) will definitely drain your health and lives, however - just like in most of the LJN games where the movie monster pops out.
So is A Nightmare on Elm Street a perfect, flawless NES title? Heck no. However, it is clearly one of the best games that LJN released (possibly owing in part to them shopping the visuals and programming bits to Rare, a company with a much better track record.) The game is enhanced by the 4-player co-op, a rarity among NES titles and a real treat that makes this game much more enjoyable. So get yourself a Four Score, grab a copy and a trio of other dream warriors and take Freddy out! You know you want it, and Lukie Games has it! 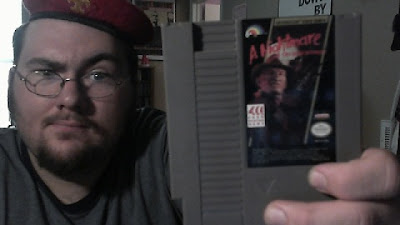