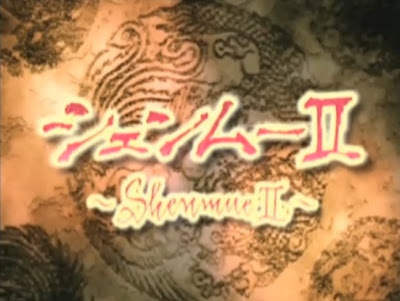 1999 was a pretty awesome year as far as Christmas was concerned. I was 14 at the time which means I had been gaming for a good solid 9 years. By that time a simple rule had been established in my household: if you want a new video game system, you have to sell off enough of your old ones to afford it. It made good fiscal sense for my folks - they still would chip in whatever the remainder of the cost was, but the bulk of it laid on my shoulders (which not only taught me a lot about responsibility but also how dumb I was for selling off a game collection that would be worth hundreds today just to buy a Sega Saturn back then.) Anyway, this year my folks broke their own rule and bought me a new system that I didn't even really ask for: The Sega frickin' Dreamcast. 12 years later this thing still impresses me and it still manages to be one of my favorite systems of all time. There's a handful of all-time great games for it and the thing has so many other uses and functions that it's ridiculous.
After all this time, I still consider the Dreamcast a wonder machine! However, this isn't a review of the Dreamcast - this is a review for what I think is not only the best game series on the machine but one of the best game series of all time; Shenmue. While it would make sense to review the original game (which I will cover briefly,) my focus is typically underdogs and underrated classics. Sure, the original Shenmue should have had even more attention and notoriety - but it's the sequel that takes the cake for "underrated classic of the Dreamcast." Also, my focus here will primarily be on the Dreamcast version of Shenmue II and not the Xbox one (although the differences are fairly minute.) When necessary, I'll mention or compare/contrast the Xbox version as well; however, the Dreamcast version is the copy that I consider "the definitive version." 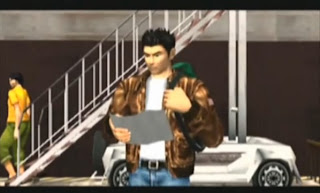 Welcome to Hong Kong Ryo. Everyone here's out to get you.
The original Shenmue was a groundbreaking game that went way too underappreciated. That's not to say it didn't sell well; it's just that the Dreamcast itself never reached the audience it deserved. Shenmue's development legacy is well documented elsewhere, so I won't labor on it too much. It's important to note that Shenmue was one of the most expensive games created at the time and the very fact that the system undersold hurt the series quite a bit. Sega AM2 planned to release Shenmue as a trilogy. Sadly, due to the failure of the Dreamcast the sequel was only released overseas.
*Note* Lukie Games sells a copy of Shenmue II for the Dreamcast. My instincts tell me it's the same copy I have that is a PAL format one. I recommend waiting until you get the copy and find out for certain if it's PAL or NTSC (I think an aftermarket NTSC version exists somewhere.) However, if it is indeed PAL you will need a boot disc for your Dreamcast to play import games. They will probably run you roughly 20 bucks or less at certain retailers. I personally recommend the Innovation Super Game Converter. If you order the Xbox version - disregard. That one is NTSC with English dubbing.
Shenmue and Shenmue II are very story driven. With that being said, I'm going to assume you have played the first game but will try and be relatively vague to avoid spoilers. While it's not impossible to enjoy Shenmue II without having played the original - I highly recommend picking up a copy of the original from Lukie Games as soon as they have one in stock. 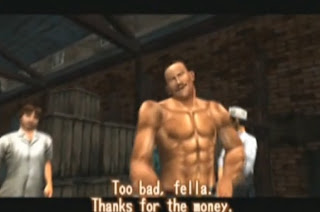 You can arm-wrestle this cat for money. But do you really want to?
Shenmue II picks up right where the first one left off - your character Ryo Hazuki arriving in Hong Kong on a boat from Japan in order to track down your father's killer Lan Di. You must first locate Master Lishao Tao (and of course a whole slew of other main characters, protagonists, antagonists, and supporting characters) in order to find out more information on the whereabouts of Lan Di. Also important to Ryo's quest is the Pheonix Mirror he is carrying around; a valuable artifact that plays a crucial role in the conclusion of the game (and of course would serve as the cliffhanger to the currently abandoned third game in the series.) One of the biggest assets of the Shenmue series is the amazing and engrossing storyline. It is one part RPG, one part adventure game, and two-parts action-revenge film.
Folks who don't like their games cutscene heavy need not apply. This game is rich in story and plays a lot like an interactive movie. That's not to say there aren't many instances where your control of Ryo is integral to your success, but there's a reason the Dreamcast version took up 4 discs! Even now, the graphics, textures, animations, etc are all breathtaking. That's a real feat that 10 years after its release Shenmue II still amazes me with the attention to detail that is in EVERY aspect of Ryo's journey through Hong Kong. Clothing, fabric, and hair move with the breeze. Leaves fall and float through air realistically. Characters have facial expressions that are so lifelike you can really buy their emotions. As solid as the graphics were in the original, they seem to be even smoother here. Every angle and seam has a real polished look and the Xbox version accelerates the graphics even further. Though some may question which version looks better at the end of the day - I think the minor graphical tweaks made in the Xbox release are a welcome improvement to an already near-flawless graphical representation. The music is outstanding and really captures the feeling that you're right there in China (just as the first game transported us Americans to Japan.) The score is heavy on the orchestra and it's easy to see between this breathtaking soundtrack and the revolutionary graphics where all of that money went into making this game. 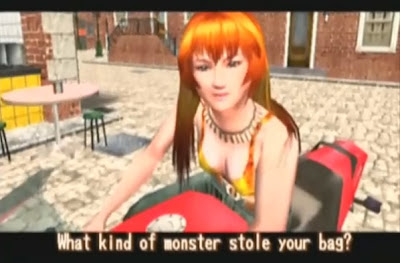 This foxy motorcycle mama is Joy. She'll help you occasionally.
The main critique I have with the Xbox version versus the imported Dreamcast version is with the voice acting. Both versions have a wealth of voice acting and everyone you meet on the streets will have something to say to you. However, the American voice acting in the Xbox version (outside of Ryo) is very stiff - at times downright comical or bad. Where as the Japanese language track in the import version feels much more natural. Again, this all boils down to preference and how you like to take in your foreign films as well. Some like it dubbed, some like it subbed. It's hard to convince people in one camp that the other has something to offer them that they otherwise wouldn't be able to live without. I'm not a hardcore Japanophile, at all fluent in Japanese or even a subtitle snob - I just tend to prefer voice acting be done in the language that the film/game was intended. For those used to subtitles, they are never distracting from the action and they leave you plenty of time to read and follow the story.
The controls are familiar to anyone who played the original and should be relatively easy to grasp for anyone who hasn't. There are different ways in which to control Ryo (dependant on what is going on in the scene.) First, and most common, is that you'll be walking around with your left stick while frequently speaking to folks/ performing tasks with action button. In both versions of the game your controls are mapped out on the bottom right hand side of the screen. Sometimes icons such as your journal icon will pop into the colored orbs to signify that something new has been added to your journal, etc. Ryo controls with relative ease and it's fun to just walk around zoom in on people to watch their routines, follow random strangers around town, go into arcades, markets, or gambling shacks. You have a great deal of freedom and a really big world to explore in Shenmue II. Just remember that you have revenge to plan and time's a-wastin'.
Another way in which to control Ryo is during cutscenes rather than the free world. This control scheme is known as QTE - and you'll likely be quite a bit more frustrated by this than just roaming around. The best way I can describe it is that it's the Dragon's Lair equivalent to controls. You'll get an indicator of what button/direction to push and Ryo will either dodge, jump over, walk around whatever obstacle is in his way or he'll fall flat on his face - serving to slow you down or make you lose and possibly have to start over. I can't tell you how many times I fell off of the 2x4 beams during a QTE on disc 3. Let's just say it's maddening. Thankfully these are few and far between, but unlike the first one there are more of these than freestyle fights. You'll still have times where you'll have to enact the third style of control (Fighting mode) but not near as often as it felt like you did in the first game. In fighting mode you have a health gauge and you have several different moves at your disposal - many of which you train and learn throughout the game. I don't know why, but it was really fun letting out my inner Daniel-san beating up the lotus tree during the first chapter of Shenmue II. 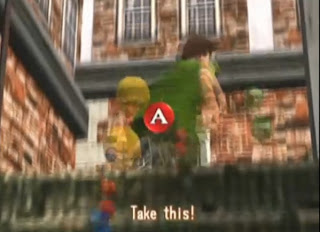 This kid's a little brat. Get your fingers ready and catch this thief!
The controls are more or less identical between the Xbox and Dreamcast versions. I'm more used to playing Shenmue on the Dreamcast controller but that's nitpicky personal preference. You wont notice much/any difference between the two, and you can pick your poison.
The game is in no way a difficult one - it's just really long. The xbox version comes on one dvd (not counting the bonus movie packed in to brand new copies) but the original Dreamcast version is packed on a whopping 4 discs. Granted that's also a lot of cutscenes, cinematic music scores, and voice acting for days but if you're willing to explore the game top to bottom, perform jobs to earn money to buy ridiculous toys, and bet on arm wrestling or other shady stuff - you will be able to play this game for days on end. The replay value depends on how well you like the story - if you really dig it, then it's just like watching your favorite movie over and over again. Otherwise, you might be done with it as soon as you reach the compelling cliffhanger. That much is up to you.
I really hope I convinced you to give this game a shot. The Xbox version is available right now and though I have some minor nitpicks against it, it is still a true classic and is a whole lot of fun to play. If you're willing to wait (or wanna put yourself on the waiting list) and don't mind paying more for the Dreamcast version, I recommend it. Whichever version you pick, I can almost guarantee you'll enjoy it. Not a legally-binding, money-back guarantee mind you... just a friendly "I-really-think-you'll-dig-this-game" guarantee. Head over to the main Lukie Games site and getchoo a copy! 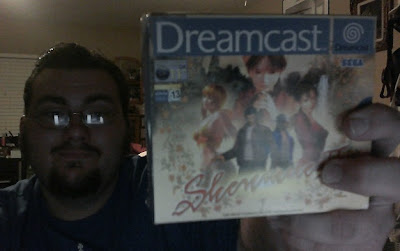