What Handheld should I get? Pros and Cons (Gen VII Edition) Part 2-PlayStation Portable

Way back in 2003 a tiny little handheld was announced during a time when everyone was going on and on about how the future of gaming was in MMORPG’s. Which is kinda’ true, but I’m not here to discuss how eventually we’ll all be wearing virtual reality helmets trying to solve the mystery of your friend falling into a coma. I’m here to talk about a Handheld console that has had almost as many revisions as the Xbox 360. The PlayStation Portable boasted some of the best spec’s of any handheld ever conceived at the time having the prototype GUI of the PS3, the ability to play movies, view pictures, and most importantly it played games with graphics similar to that of late era PlayStation games. Despite boasting such impressive specs and such impressive features the system was marred with a host of design flaws and marketing problems. Aren’t you lucky you have me to explain all this? 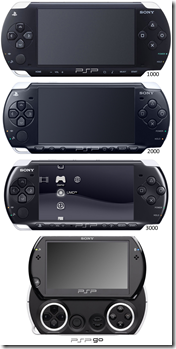 The PlayStation Portable was Sony’s answer to Nintendo’s long line of successful handhelds originally launched on March 24, 2005 in North America with mixed reactions as many weren’t to thrilled with how much more expensive it was than the Japanese version. Despite retailing at $250 the Sony managed to push 500,000 units in the first week alone. The handheld was revolutionary for its ability to not only play games but act as a sort of media center by being able to play not only games but music and video, it also boasted higher specs than the Nintendo DS and was able to play games at higher resolutions and with better graphical quality. The PlayStation Portable also could utilize WiFi for both local and online play of games similar to the Nintendo DS. If you ever became bored of how the systems interface looked you could download new themes and backgrounds for the system and customize the media icons to make the system more personal.

You’d be surprised at the level of variety.

The PlayStation Portable went under many revisions with its final form being the recently released PlayStation Vita. Sony has had to deal with many bumps in the road involving both marketing and building its gaming systems. If it isn’t from terrible marketing campaigns, to poor anti-piracy measures they've more or less spent the past decade on a steep learning curve as they’ve been trying to reach the plinth that the other gaming giant Nintendo has been standing proudly on for decades.

All games on the handheld come in either UMD form or can be downloaded from the PlayStation store and saved onto a seperate memory stick. 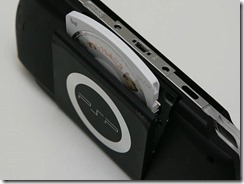 Pros and Cons of the System (Overall)

The first model released, it boasted graphics unseen in the handheld market and the ability to play movies and televisions shows sold in the form of UMD discs. Within the year of its release a system update allowed the handheld to surf the on an opera based browser. If you wanted to be able to use the internets on the PSP you had to make sure that the system was set to it as there is an external switch that alternates between both ad-hoc connections and Wi-Fi. Compared to previous handheld consoles the PSP boasts the crispest, largest, and most colorful display.

As the first version in the series it sets the bar that many of the redesigns will attempt to surpass, it features Local and Online play through Ad-hoc or a Wi-Fi connection and can play videos and music off of a Memory Stick Pro Duo.

In at E3 2007 Sony announced their first redesign of the PlayStation Portable which was thinner and boasted a much brighter screen then the previous model. The 2000 model was the beginning of a series of design improvements which trimmed the fat of the console down while adding extra features. The only major improvement internally is that it has double the cache memory of the 1000 model which helps with load times in most of the games. There are  also claims that it has better Wi-Fi connectivity but in my experience I found no noticeable difference between the 1000 and 2000 model. The screen is slightly brighter and the system comes in a variety of flavors and special editions.

A small aesthetic change is that the UMD door is no longer spring loaded and you manual open and close it, the battery is also slimmer so you can’t swap batteries between the 1000 and 2000 models. A pretty big addition to the handheld is a headphone and video out port so that you can connect the system to a TV which you can play at a whopping 480x320 resolution! :o

Physically the 3000 model seems almost identical to the 2000 but the handheld has an even brighter screen with better refresh rates than its predecessors. The Screen on the handheld is coated in an anti-glare material so that you can play games under even the most obnoxious of lights The console also has a small microphone now built in and so that when you scream at the system for freezing while you try to play Mobile Suit Gundam Crossfire it can actually hear it. Besides the better screen the innards of the system are basically the same and I noticed no improvements in the playing of games compared to the previous two consoles.

Some owners have complained of screen tearing issues.

Disclaimer: This is a PAL console but it is technically a revision so I’m including it for posterity.

The E1000 isn’t a rerelease of the 1000 line, it’s actually a budget model retailing a paltry $99. How could the get away with such a low low price? Well they did that by removing every single piece of extra hardware and software from the console giving you a barebones experience. Have you ever hated how fingerprints so easily stare back at you when you play a system with a glossy finish? Well the E1000 is the only PSP to have a Matte finish which prevents that scenario from ever becoming reality. The entire back part of the system is one big foldout drive for the UMD which in my opinion is an odd design choice.

Real Talk: I have no idea what Sony was thinking on this one. So the PSP Go is a radical redesign of the console for I assume Sentai heroes. The system is significantly thinner then all of the other models and features a slide-out design similar to modern texting phones. Long gone is the UMD drive and separate battery, both replaced with an internal rechargeable battery and a 16gb hard drive. Sony made it very clear in designing the system they wanted you to purchase games from their online store and download them to the console, especially the PSone classics which it was campaigning very heavily.

My personal recommendation will always be original 1000 model due to its durability and low price point. HOWEVER! I understand that it does not have many of the features of the later models, such as instant messaging, access to Sony’s PSone classics, and the fastest of load times. Objectively I’d say the best bang for your buck is the PSP 2000. It has not only a host of features but you can get it in different colors and special edition variants. I cannot in good conscience recommend the PSP Go! or the E1000 they both take away so much from the PSP experience while replacing it with nothing substantial.