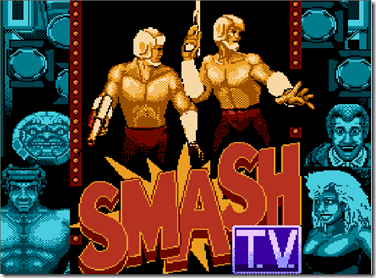 No TV’s were harmed in the making of this Review.

Money! Women! Cars! Toasters! These are what you’re working for in the game show game SMASH TV! This particular version of the game is a port from the Arcade version which was highly popular in the 90’s. The game also received ports to the two major systems at the time the SNES and Sega Genesis along with the Sega Game Gear and several home computers like the Amstrad CPC, and Atari ST. This particular port was of better quality than that of the Game Gear and the home computers but only paled in comparison to its 16-bit cousins the Super Nintendo and Sega Genesis (Twice removed). The game is played from a top down perspective and it’s a shooter in its purest form. You blast enemies while trying to avoid their attacks all while grabbing fabulous prizes. 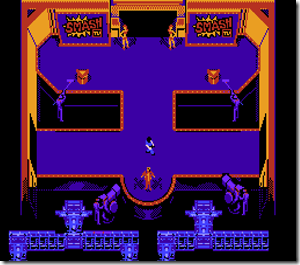 Off to kill hundreds to thousands of goons, tanks, and robots for fabulous prizes!

The game has no real story, but that’s easily forgiven based on its addictive gameplay, and surprisingly catchy soundtrack. The premise of the game is that you are a man who has been accepted to participate on the game show Smash TV, you must plow your way through hundreds of faceless goons, tanks, and strange machines to obtain the prizes and women you so desperately seek. The game comes in two flavors, Single Player and Multiplayer, exclusive to this port is the ability to use multiple controllers to control the direction you fire in instead of alternating between button A and B. You essentially use the control pad of a second controller to decide where you want to shoot, this makes it a lot easier to change firing direction but unfortunately demands the need for a multitap of sorts if you want to play with someone else.

You are generally given free choice of what room you wish to go to as at the beginning of each level you are provided with a map with the layout of the rooms which tells you where the boss and treasure rooms are. The game only has three levels but don’t let the small number of levels fool you, they are each quite difficult and dying is incredibly commonplace.This isn’t a negative aspect as the difficulty of the game easily adds to its replay value. As only through replaying can you find the secret room and encounter the surprising final boss. 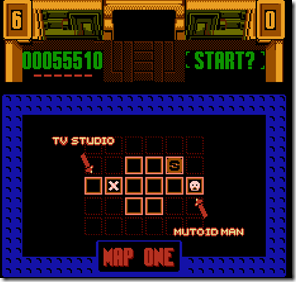 He prefers to be called a Mutoid American.

Graphics-wise the game is decent for a NES game. With some power-ups it’s hard to distinguish what they are on the ground, but after a few levels of blasting you’ll know what each one does. If you’ve been looking at the screenshots (See above and below) they are what to expect when playing this game. For the graphical purest this is not a game for you and is more for those who like games for they’re playability rather then their graphical capacity. However those who are fans of graphics need only look towards the SNES which has a version of it which is graphically superior.

All in all I’d highly recommend this game as it’s a tough, fun and all-around rewarding game to have. If you don’t like its graphics then pick up the SNES port of it which is the exact same game (I am being so totally serious right now) only with better graphics. I personally find this to be the greatest shooter in the entire history of shooters, its simple, fun, and addicting (as a shooter should be), my friends and I like to play this and take turns to see who can get the farthest without dying. This is one of those games which is fairly inexpensive but contains hours of enjoyment which easily outweigh its relatively low price.