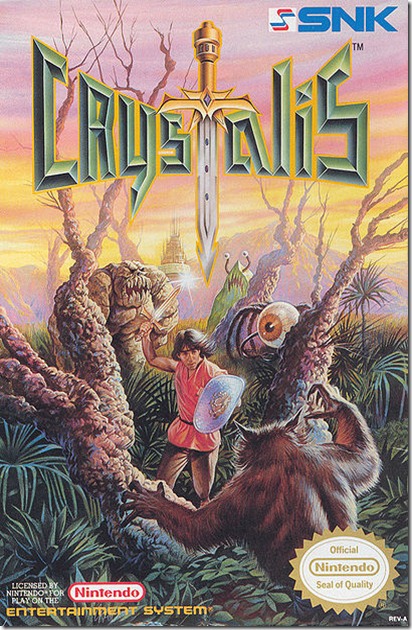 Not to be mistaken for the single-crystal aluminum nitride (AlN) Manufacturer of the same name.
Crystalis is an Action RPG that was released in 1990 by SNK. The game featured a brilliant plot and innovative game mechanics. Upon its release it garnered immediate cult popularity and ten years later it saw a rerelease on the game boy color. Since creation the the game has been featured on Nintendo Powers top 200 list placed at #115 and is considered one of the best games ever featured on any Nintendo system. One of its most praised aspects is its plot, which told the tale of a post-apocalyptic world and a man who had been cryogenically frozen and wished to save it. 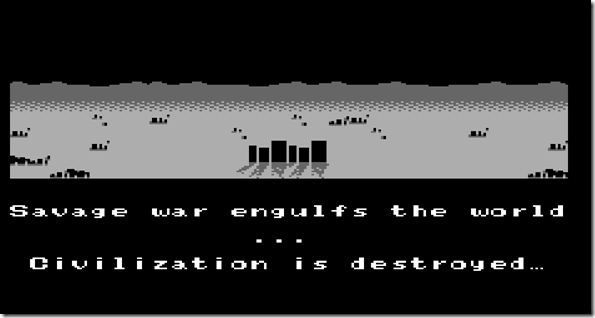 D:
As mentioned earlier the game takes place in a Post-Apocalyptic world which had 100 years prior to the characters awakening been beset by a nuclear war which ravaged and mutated everything, The unnamed(But you get to name him) main character you play as awakens from a deep cryogenic sleep and begins a quest to save the world from a giant floating Tower and the evil Emperor Draygon who seeks to gain the power of it to rule the world. This tower was originally designed as a weapon to prevent wars and as the game puts it. . .

Irony is awesome.
Throughout the game you will quest the power of the four elemental Swords and their Respective Orbs and the wisdom of the four wise men to aid you in your quest to stop Draygon from achieving his ambitions. You will also meet a girl who was cryogenically frozen as well, who aids you in finding and achieving your ultimate objective of stopping the evil emperor and the tower with the power of the ultimate sword Crystalis. Throughout the game you will travel across a large world exploring caves, dungeons, and swamps and encountering a plethora of monstrous enemies. Scattered throughout these hazardous areas are small villages which allow you a brief respite from the monsters and give you a place to learn things, purchase items, and heal. 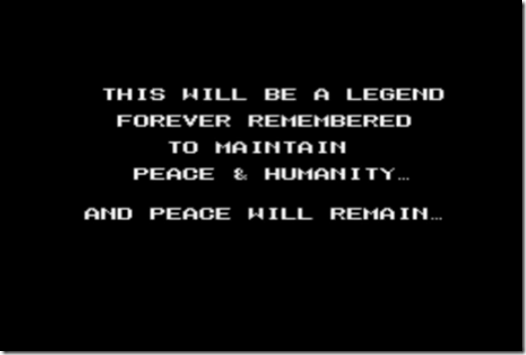 And it will see a rerelease in 10 years
Gameplay-wise Crystalis is an action RPG, you can move in eight directions and attack in four. The style is reminiscent of Legend of Zelda, but with less focus on puzzle solving and more on killing monsters to advance. The game also has a level system in which you gain strength, health, and magic as you gain levels. The experience you gain from killing monsters in the game is set and doesn’t decrease as you level so level grinding is fairly easy to do. The maximum level you can attain is 16 but there’s no pressure to do so, as you can advance through the game only being hindered but slightly less health than you would have if you maxed out. 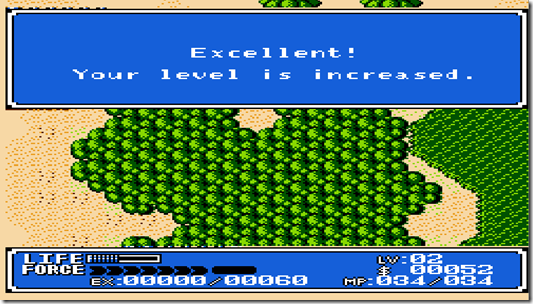 Most excellent.
Another interesting aspect is the elemental attributes of each sword, wind, fire, ice, and lightning. Each sword has strengths and weaknesses, and each sword can perform specifics tasks; an example would be that the ice sword can create ice bridges. Throughout the game you will encounter enemies who are weak to specific swords so at certain points you will have to alternate between them to dispatch your foes. Periodically you will encounter blockades each of a different color and they can only be destroyed by a certain elemental sword. An example would be the Fire Sword destroying the ice blockade. 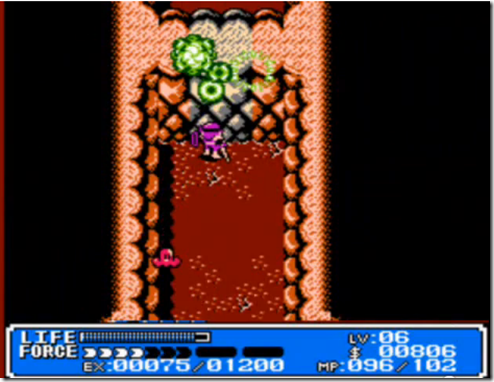 Or wind blowing up stone?
The game also allows for item equipment in a final fantasy fashion where the equipped items grant bonus’s to defense or can perform function when used. The items range from armor to fruit which grants a boost to your attack power. Most of the time you purchase these items from the shops located in each town with the money you attain from killing enemies. The shops come in two flavors, the armor shop, and the item shop both of which are identical in look but carry a different selection of goods. 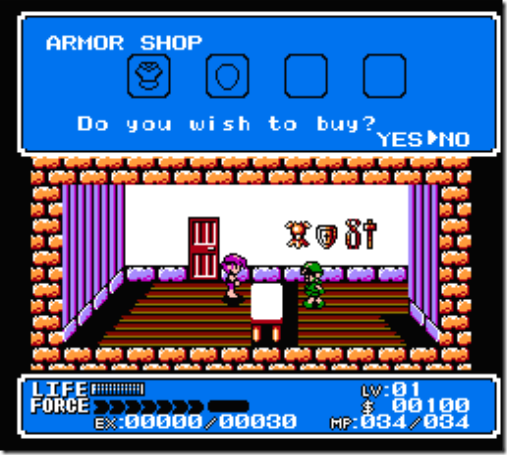 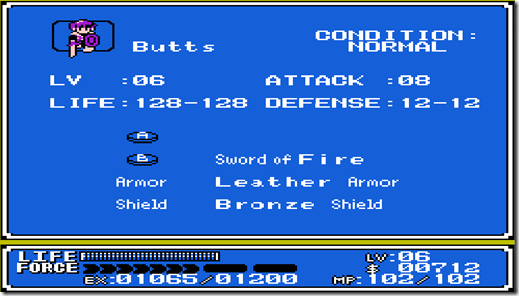 Items have a direct correlation with how strong your character can be.
One flaw the game perpetuates is poor hit recognition, at times when you are near an enemy but not touching them you will be damaged, and this is a common occurrence. Another thing is a incredibly short invulnerability time between hits, its only about half a second and if you get caught between enemies you’ll take a decent chunk of damage before getting out of the way. These flaws aren’t major as over time you gain finesse with the controls and you can juke around enemies and mash the attack button quick enough to dispatch them before they can hurt you. These few flaws in no way make the game worse for wear as the good easily outweighs the bad. Some may not notice it at first but your characters sprite changes based on what he has equipped, which is a nifty little thing that most games of the time didn’t have.

Beard, no beard, beard beard, no beard.
The games graphics are amazing especially for a later NES title as you can definitely see that SNK went all out with the game. A great example of this is the Cryogenic Freezing chamber you come out of when you first start the game, this thing glimmers to life as it releases your character and then softly fades as it powers down. 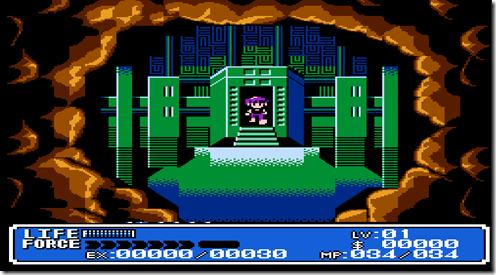 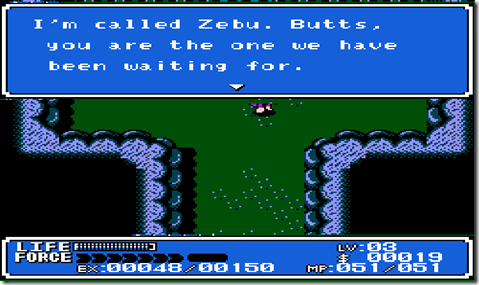 And there are some silly lines. . .

That’s a girl by the way.
Overall this is a great game and obviously a classic which deserves recognition. The game delivers a solid plot and story that doesn’t deviate from what it was intend to with nonsensical side quests or nonlinear events. The game also has a unique system to how you use items and their effects on the character. Despite a few shortcomings the game ultimately delivers a satisfying package that is worth playing through at least once. All in all this is a game I highly recommend for fans of RPG’s, or the NES Zelda and Final Fantasy games.
Posted by Unknown at 1:26 PM