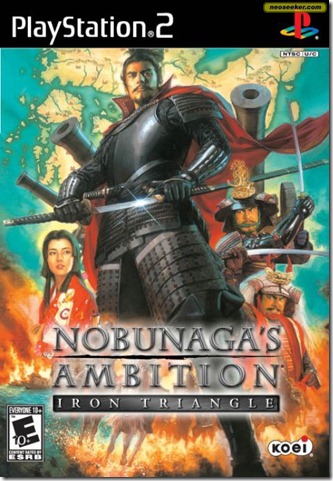 Nobunaga’s Ambition: Iron Triangle is the twelfth installment in the Nobunaga’s Ambition series released in America by Koei (There are an innumerable amount of them in Japan though). Its set during the Sengoku Era of Japan where your main objective is the unification of Japan through either diplomacy or war. The game uses a different formula than the Romance of the Three Kingdom games, where instead of operating on a turn based system you alternate between two phases; Planning and Active. The game also focuses heavily on technological development over mere military conquest as having the best technology can easily give you the advantage in battle. The game has many events that come in the form of stills and text, there are quite a few of them (both generic and historical) and they require certain requirements to be met just as in Romance of the Three Kingdoms. The Character Creation System is similar to that of Romance of the Three Kingdoms so fans of the series won’t find it to hard to jump right into character creation.

Now being that this is a historical simulation game, the plot and story are null. You spend the game playing as a Daimyo of your choosing and you can choose to either cause history to take its course your you can forge your own history. I won’t talk about the history of 16th century Japan (as there is a lot of it), but instead I will point out that the game makes playing as Oda Nobunaga the main point of the game. By playing as the Oda you will view the most story events and will unlock the most things. Don’t think that by not playing the Oda you won’t see story events, every single Diamyo has at least a few events to their respective kingdom that you can view. So viewing them all is a treat in itself and adds quite a bit of replay value. 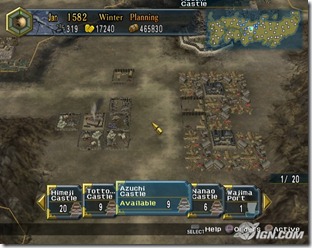 You switch between these two phases to perform your various actions and they are essentially the core of the entire game.

Technology is a key factor in this game and easily determines who will come out on top. Technology in the game ranges from the invention, use, and evolution of Muskets to additions to your castle and new agricultural practices. Your technological prowess is increased through research by officers who are proficient in that field (i.e. Cavalry, Infantry, Civil, etc.). Certain clans are naturally proficient in certain technologies, some examples are Nobunaga’s affinity for Muskets and Castles, Ieyasu Tokugawa’s affinity for spears, and Shingen Takeda’s affinity for Horses. These clan specialties will eventually gain you special technologies exclusive to them, such as Mikawa Spirit which makes Infantry immune to mislead and rumor tactics, and allows troops to fight with zero morale. 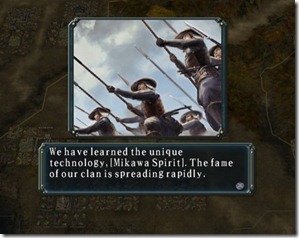 Technology is very important for both offense and defense as developing your weapons can easily give you an edge in a battle where you might have fewer troops, and developing your castle and its defenses can make what may have once been nothing but a small base into a nearly impregnable fortress. These things usually determine the outcome of a battle. Outside of battle developing your Civil technologies will boost your economy greatly as you can increase production of food and gold, and even make your people immune to plagues. Or pimp out your castle.

The battles take place on a giant Over world map of Japan which is dotted with mountains, rivers, and plains. Your troops move across the plains during the active phase and you can issue commands to them during both phases. Your units are little masses of troops that generally look like whatever type of unit you chose them to be, Cavalry units will look like people on horses, Musket Units will look like people holding guns, etc. In this game there is no superior unit, but early in the game Muskets are quite powerful but very very slow and easy targets for Cavalry. Over the time as technology evolves units become more powerful as they gain bonuses to both attack and defense and sometimes even range depending on if it’s a ranged unit. Each unit has an advantage against another, kind of like a weapon triangle but much larger, a Heptagon if you will. Though for simplicities sake we’ll keep it to attacking units and leave buildings out of the equations.

Bows and Muskets can be used interchangeably for the sake of argument. Thus leaving us with a triangle. A majority of battles in the game will be to either defend, or attack a base(castle/port). Attacking battles give you three options for conquering whatever it is you want to conquer;

1. You can surround a base and wait until the bases Morale drops to zero and they give up.

2. You can attack the base until its walls are destroyed and then fight the soldiers inside.

3. You can attack the soldiers inside through ranged attacks. Pictured above are several units surrounding the Shimazu’s Castle.

Defending Is the reverse of attacking in this game as you will avoid allowing the computer from doing either of those three things using the tactics Rumor, Mislead, and Raid along with fielding your own units.

Raid – Have a unit ambush an opposing unit confusing it

These three tactics are very important and can easily cripple a large attack force. Remember them. 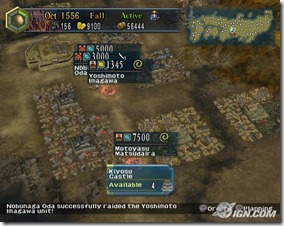 Pictured above is the legendary scene in which Nobunaga Oda ambushes and Kills Yoshimoto Imagawa.

Through these tactics you can turn around most sieges. You can also build turrets to attack enemy units that enter your territory, they work great when set up down a narrow path.

The game has a diplomacy system similar to that of Romance of the Three Kingdoms where you can make alliances, force enemies to surrender to you, extort from enemies, and annul alliances. Most of these are self explanatory but the alliance system has a few quirks. Unlike most strategy games where when you offer an alliance to someone they either can accept or deny it, however in this game they can demand money, a hostage, or even a daughter to one of your generals. This give and take system is very prevalent and will be something critical to understand when you are playing the game, as very rarely will anyone give anything for free, even your allies. This same system is in place for negotiating technologies with other clans as they can demand money, your daughter, or a technology of your own as payment for theirs. 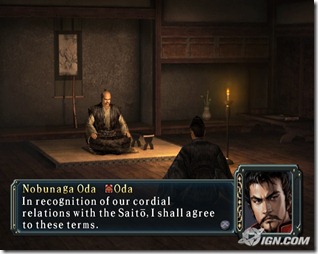 I don’t think allies should be so reluctant to do something for you. . .

Events as mentioned before are stills which explain something that is occurring, they come in a variety of flavors, from the death of an officer, to Nobunaga’ assassination. You unlock them by fulfilling certain requirements like conquering the country after attaining the rank of Regent, or ambushing Yoshimoto Imigawa.

The character Creation system allows you to make your own officers who can either serve an existing Daimyo or they can be Ronin and be recruited later. Unfortunately you can not make characters Daimyo from the get-go you have to have the previous Daimyo of a territory retire and set your CO(Created Officer) as Daimyo. The character creation is fairly in depth as it lets you select your occupation from anything as low as Peasant to as high as a Noble or even the shadowy Ninja. You can also set their religious preferences from the three major religions at the time Ikko, Buddhism, and Christianity, or you can choose not to affiliate with either of them. Another interesting feature is the capacity to specify the force your character likes the best and the base in which they will pop up in. The stats setting is fairly open where you can set your Leadership, Valor, intelligence, and Political ability anywhere between 1 and 120. Along with stats you get to select your tactics which is similar to that of Romance of the Three Kingdoms. In this game you can only set each character to have one Friend and only One Enemy and this will greatly effect how that particular character perceives those two.

Now the games graphics are all beautifully 3D and you can easily tell that a great deal of detail was put into the building of each area. This is obviously different from the cell-shaded look that the ROTK series went for, and in my opinion is the most visually appealing of the two. The musically score is stunning as the soundtrack is Orchestrated entirely using Japanese instruments (just like how the ROTK games had Chinese instruments). The game is incredibly aesthetically appealing.

This is a great game for any strategy or history buff as it stays mostly true to what happened during the Sengoku Era and the rise of the Samurai Class in Japan. It also allows you to play as any clan who existed during the time, and in two fictional scenarios it allows you to play as clans that existed prior to the Sengoku Era. This is a fine game and is worth a look if you enjoy playing strategy games, or if you are a fan of the Romance of the Three Kingdoms series. In my opinion if you prefer strategy games that involve more micromanagement and less RPG aspects, this game is definitely worth it.

For those who are TL;DR, This is a strategy game with lots of depth, if you are interested in this, buy it. 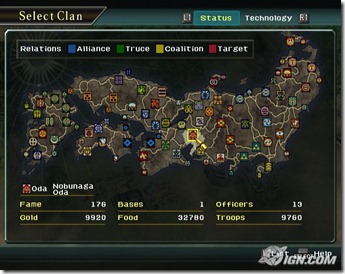 Japan in the 16th Century! But wait what's that in the lower right corner?

All picture credits go to IGN