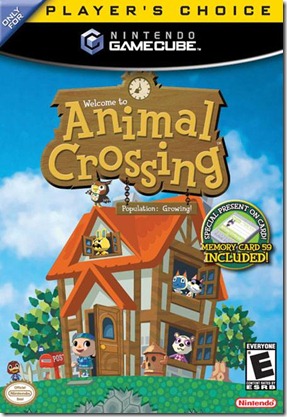 Animal Crossing, the lovable simulator of blinding debt, and the fulfiller of simple dreams of owning your own home in a town filled with talking animals. To this day Animal Crossing has garnered a rather large popularity with as of the post two sequels and a third poised to be released in the near future; but did you know that Animal Crossing is a sequel in itself? Animal Crossing is the sequel to the game Doubutsu no Mori (Animal Forest). Now Doubutsu no Mori believe it or not was a game for the Nintendo 64, and surprisingly enough had similar graphics to that of the GameCube sequel. Graphics aside that’s where the games start to get different, Doubutsu no Mori was more or less caked in Japanese culture and as such wasn’t viewed as being fit for American audiences, as such the sequel was heavily localized with many things being changed to suit American audiences. The localizing however by no means made the game unwieldy or awkward to play, the game was reinvented for western audiences with items and holidays being changed to be more familiar for the public.

The game has no plot, it’s a game which in theory never ends; you play the game as either a boy or girl and buy a house, from there you go about paying off your house loan and actively striving to get all the furniture and fish/bugs/fossils. The game runs on actual time working off the internal clock of the GameCube and the clock saved onto the memory card with your town. This adds a great deal depth to the game as during different times of the day you can encounter different bugs/fish and the people of your town will over the course of the day perform their own rudimentary day to day tasks. Over the course of the week certain special people will visit your town and by interacting with them you can usually obtain rare pieces of furniture, or items. 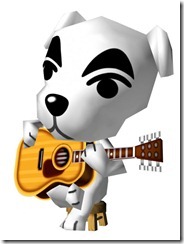 Oh and a singing dog pops up every Saturday evening.

Animal Crossing has much to offer in the ways of things to do, you can catch bugs or fish, dig for fossils, or run errands for the people in your town. Though the more interesting option would probably be to collect all the furniture and upgrade your house. There are over hundreds of different furniture items in the game ranging from modern furniture to show pieces with little features like the Master Sword that plays the item finding theme and even to full NES games which you can play at any point in time. You can also find clothing ranging in over hundreds of designs with which you can customize your character aside from just buying clothing, you can also design your own patterns and you can wear them or use them to make umbrellas, wallpapers, or signs. 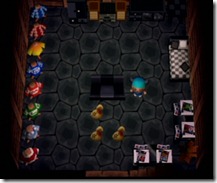 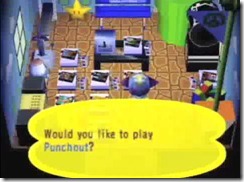 There's a lot of stuff in this game.

Now if just collecting furniture isn’t your thing there are other things to do, like work on expanding your towns museum,You can go about doing this by donating bugs, fish, paintings, and fossils you find. This doesn’t just give you a great museum it also helps to attract more people to your town increasing its population over time. Another thing you can do in the game is plant/cut down tree’s and flowers, you literally can completely change the landscaping to your will, by doing this you attract more people and if you can get the town to be perfect for a few days you will be awarded with the coveted Golden Shovel. 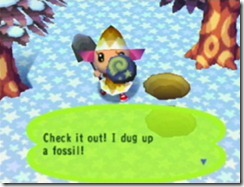 Which you can use to do the exact same thing you were previously with.

Animal Crossing also contains a secret which you can only access if you have a Gameboy Advance and a Gameboy to GameCube link cable. If you hook the cable to your Gameboy and talk to Kapn’ by the dock, he will offer to ferry you to Animal Island. Animal Island is a small island you can access from your Gameboy where you can get items of varying rarity, exotic fruits, and you can even have the islander(s) potentially move into your town. The best part is that when you unhook your Gameboy you can still access your Island as it is available for you to mess around with until you shut your Gameboy off in which the island is saved onto the Gameboys ram. You can go back and forth as much as you want as many times as you want (it’s an easy way to get coconuts). 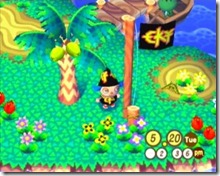 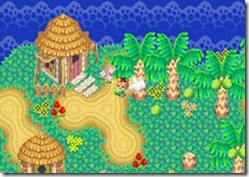 Many fun times are to be had.

When I got this game back in the early 2000’s I recall spending my afternoons blissfully catching fish and shaking tree’s for fruit to pay off my house. The day I got my first NES game in it (it was Excite Bike) I nearly exploded with giddiness, and fervently checked Tom Nooks store every day hoping to find a NES game there, unfortunately only Crazy Redd ever seemed to get them once in a blue moon… naturally I bought them. 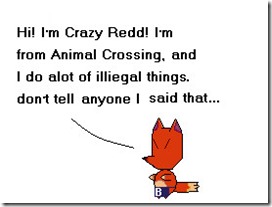 I firmly believe that I can trust his face.

Animal Crossing is a game is a game that can be played either casually for about a half hour or an hour. or you could spend your entire day playing it. It is the kind of game with no end, so you can play it without stop. Since the game operates according to real time even when you aren’t playing it the people in your town will still go about their day to day lives; also since the game moves according to real time if you don’t play for a while your town will inevitably suffer (Weeds EVERYWHERE!!11!1!111!?!/1). The game has an infinite amount of replay value (so long as you are into reality simulating games) and as such holds up well to its sequels seeing as only in the first game can you find full NES games built into furniture, travel into a special island town which can be saved to your Game boy, or partake in holidays that are exclusive to the original Animal Crossing game. 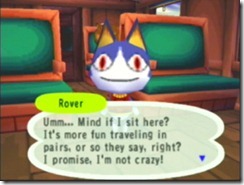