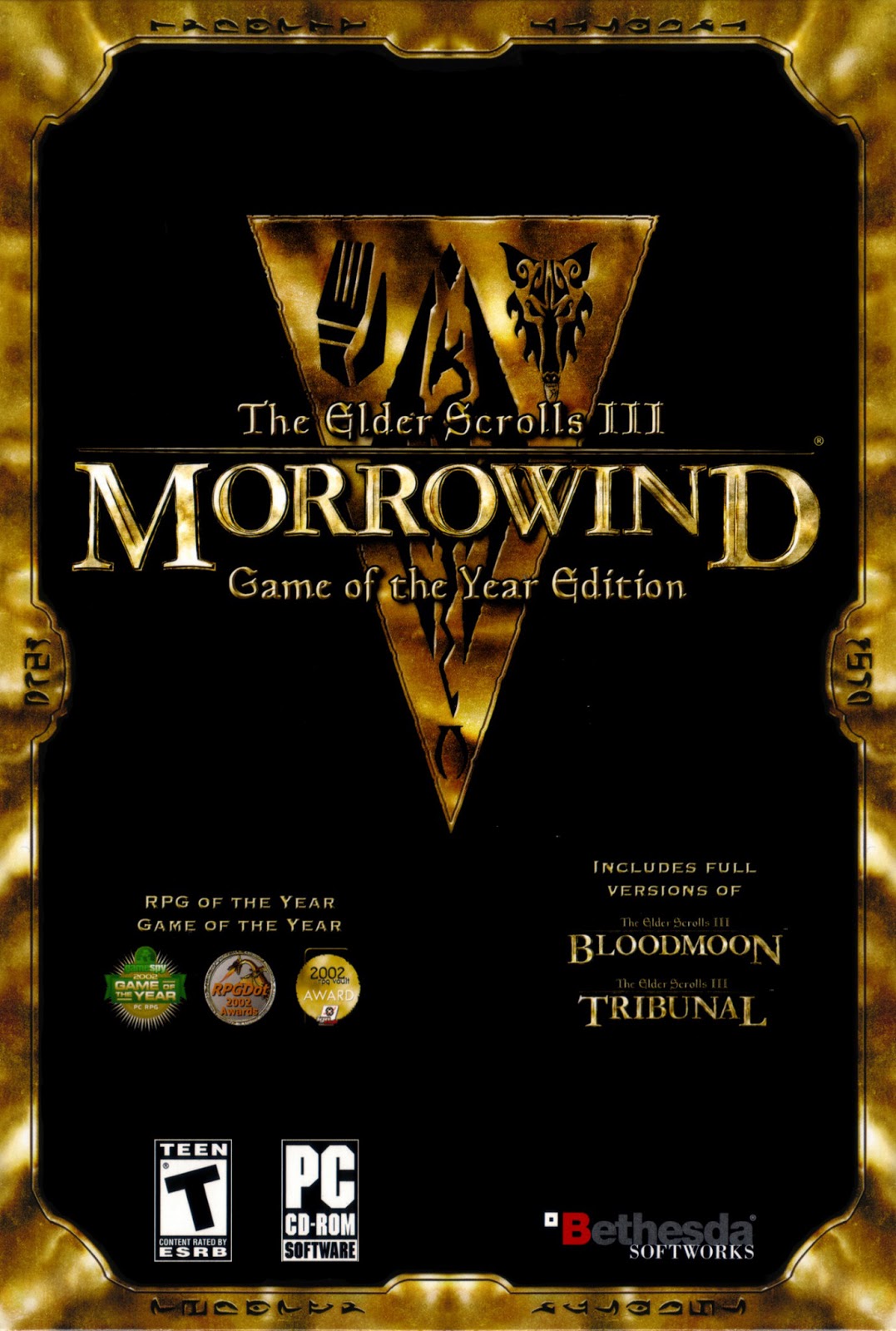 TL;DR: Morrowind is a really good game and you should buy it. Choose the Game of the Year edition over the standard edition. Here's a quick video that will tell you what you're in for.

Where have the years gone? Long before “Game of the Year” was a worthless title applied to whatever game happened to push the most units it was given to a few select games as a mark of merit for being beloved by all. Morrowind was one of the first games to win the right to have a Game of the Year release but unlike most Game of the Year releases it contained two entire add-on's that previously were only seen on the computer. I feel nostalgia as much as the next man or woman so for the sake of fairness I've made a point of playing Skyrim, Oblivion, and Morrowind in succession so that I could make note of improvements to the mechanics and problems that may arrive from other changes. I doubt many who play the more modern Elder Scrolls games have had the luxury of enduring the first two games (Arena and Daggerfall) which although having great story didn't have the most intuitive game mechanics. If anything Morrowind can be considered a bridge between the traditional d20esque mechanics of the first two games and the more action oriented mechanics of Skyrim. 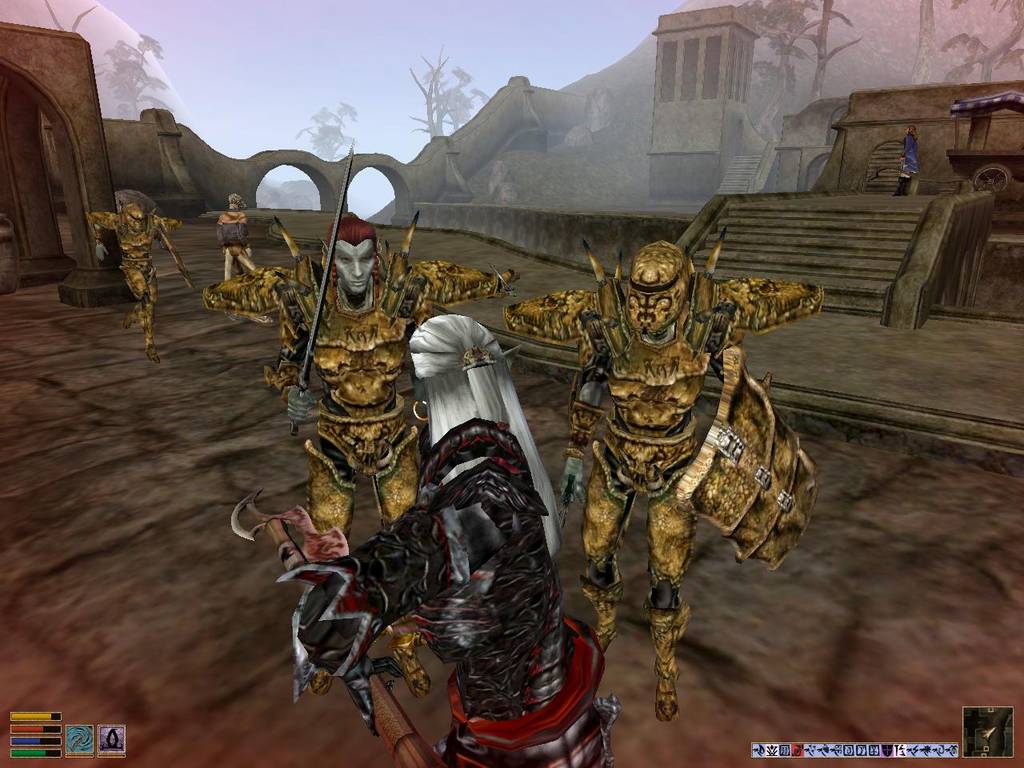 No matter how many times I poke him with my pike he doesn't turn into a blood explosion!
This game is obviously broken.
If you find yourself getting angry at games where you physically see your attack connect but the game tells you “It missed” or “It hit for 26 points of damage” then Morrowind is not for you. Seriously. You have no reason to continue to read this review because there is no way I could convince you to like a game that heavily utilizes mechanics that you don't like.

In The Elder Scrolls III Morrowind places you as a prisoner being transferred to Morrowind under orders to do a job for the Empire to earn your freedom. (Spoilers Begin) After numerous encounters with imperial agents and cultists you learn that you are the Neverar the reincarnation of an old Dunmer hero who is destined to save the the Dunmer people from a cataclysm. (End Spoilers) Unlike your typical JRPG or WRPG you are not restricted to completely the main story quests and the game does not end once you complete the main story if anything the most enjoyment in Morrowind can be gained from the many side-quests and side stories. You are free to adopt any playstyle you want, be it the stealthy rouge, the burly barbarian, or the Wizard with an awesome beard best of all who you choose to play as has no impact on your ability to fully experience the world, a warrior can still join the Mages Guilds, a Thief can still join the army, and a cold-hearted murder can still be the hero. It cannot be understated how much choice is offered in Morrowind. 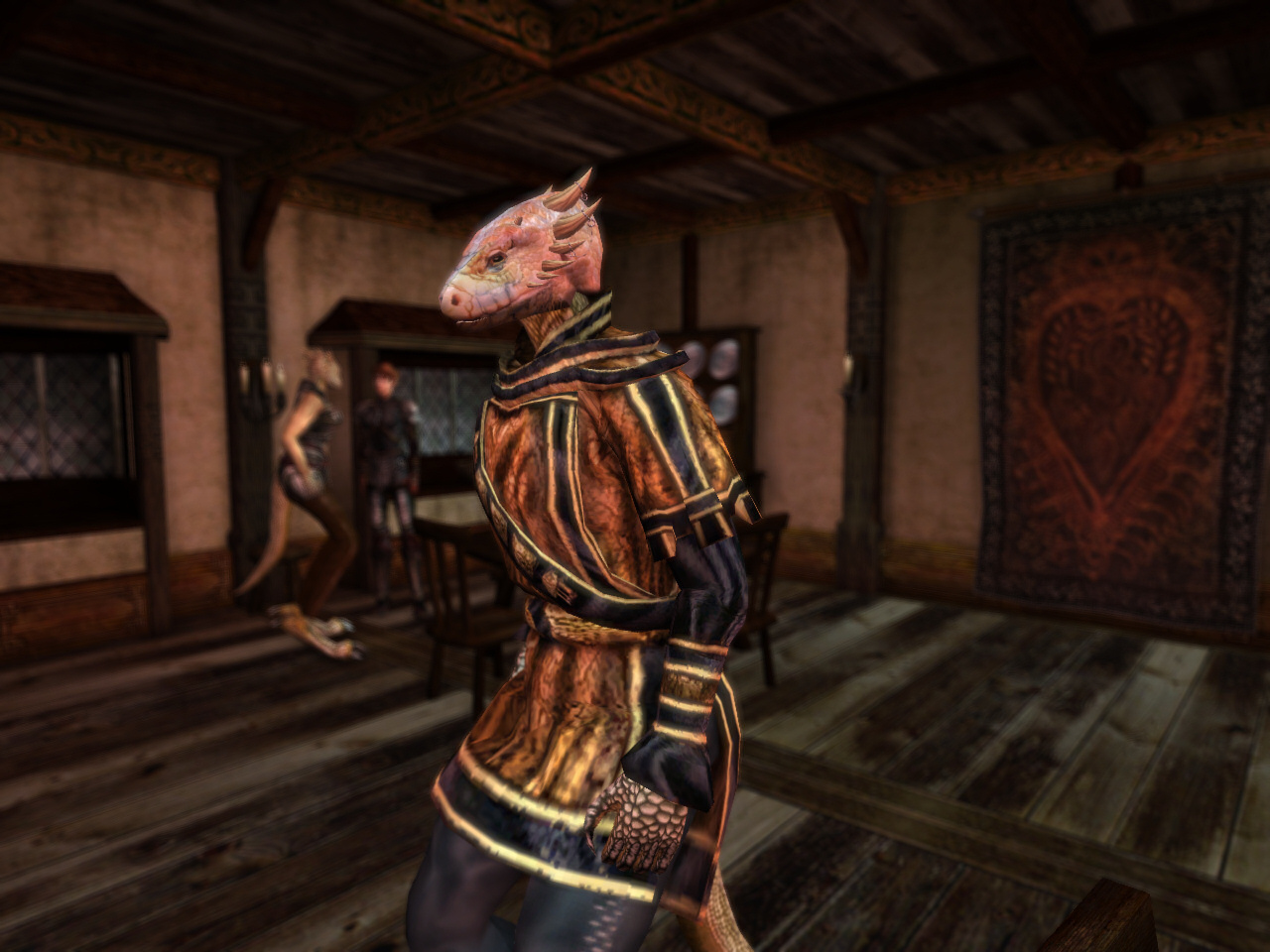 You can even be a lizard with a taste for fashion!

Despite the amount of choice in the game there are a number of downsides. One of the biggest downsides is that with access to so much choice it can feel overwhelming at times and depending on your play style it can be easy to feel like you are making great gains with minimal effort. Depending on what version of the game you play the amount of debilitating bugs can become a great nuisance. Imagine if you would, you're walking through a new town and you decided to talk to one of the townspeople to glean some amount of useful information. Well as luck would have it the moment the dialogue box opens you are accused of murder and everyone in town subsequently swarms you and starts to mass attack you. Which might suck, just a little bit. Those bugs can get pretty cray cray, but if you buy the Game of the Year version it will come with several patches built in that fix a majority of the problems. 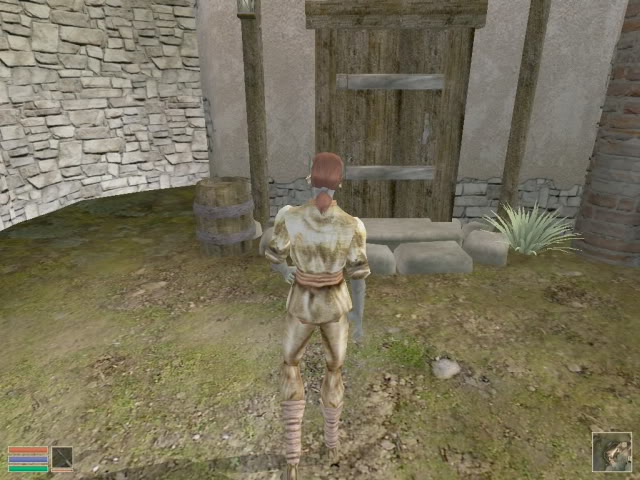 See that bucket? Yeah. Jump at the wall next to it and you can phase through it and break the game.
Morrowind handles immersion in some pretty classy ways. Have you ever wanted to be able to pick up virtually any object no matter how worthless and carry it around with you? Well you can do that. Imagine, if you would Conan the Barbarian lugging around a sack of 100+ pillows. You can do that, but with most any practically worthless item. To accompany your OCD ways Morrowind accompanies most of your actions with a masterfully composed orchestral number like my personal favorite “Nerevar Rising”:

That song sounds familiar you say? Well as it so happens its been used as the basis for a recent very popular Song called the “Song of the Dragonborn”. Yeah, THAT Song. Kind of makes Bethesda seem a tad unoriginal recycling old numbers by adding different instruments. Its highly unlikely that you'll dislike the soundtrack if you are already a fan of the newer or older Elder Scrolls games and if you are a newer fan who has not played the games then know that the two songs I've provided are considered the most iconic of their respective games and more or less set the bar for their scores.

Morrowind has not aged all that well graphically, the character models and movements seem incredibly archaic when compared to todays standard and can easily be considered an eyesore if you aren't already used to the graphical limitations of previous generations. I mean, even back when the game came out I found the walking animations kind of jarring. For some reason (probably the limitations of the Xbox) the walking animations are prone to stuttering so it looks like everyone in Morrowind is trying to get a grant to patent their silly walks. There also is little in the way of character model variety and you will encounter many NPC's who look identical, sometimes even in the same town! Because everyone totally has a unique look about them.

I can assure you that most of the games flaws come from gamebreaking bugs and graphics that just haven't aged well. The world itself is large and you can wander where you want, quests are plenty, and if you feel so inclined there are crafting mechanics that allow you to enchant armor with magic and you can even create new spells by combining spells you already know. YOU. CAN. CREATE. NEW. SPELLS. If that isn't one of the coolest things in a game I don't know what is. Sure, you can craft armor or weapons in some games but can you create entirely new spells by combining the effects of of other spells? No. Very, very few games implement such a mechanic due to how potentially gamebreaking it can be. Now when I say gamebreaking I mean that by combing certain spells you could potentially create a spell that could easily one shot most of the games enemies with little to no effort. 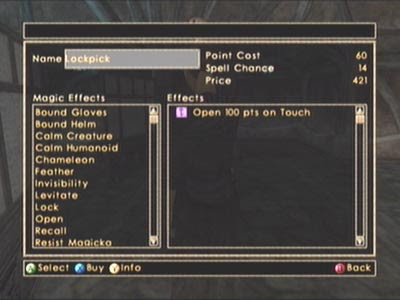 Cool people create spells that calm enemies down while setting them on fire.

Seriously though, what do graphics and choice matter if the mechanics are bad? Morrowind has its share of problems due to how inaccessible the mechanics can be. For a person who is more used to the quick-fire action games or the modern era its likely that the d20 chance mechanics will confuse and baffle most new players until they get a good grasp on how much luck and chance play into everything. From the outset of the game you are given nothing but vague directions to a town and you are left to fend for yourself which can be difficult if you don't understand how important disposition is to bartering and information gathering. Hell raising your disposition can be a herculean task to anyone who just wants to go around hitting things till they become dead, without proper points in speech most people will either dislike you or not particularly care about giving out info to you. The world itself is large and the map isn't terribly intuitive when it comes to helping you find locations what more fast travel wasn't a thing so you have to walk (run) to most places unless you can fend a ferryman or Stiltstrider (more or less giant bug taxis) that will take you to the location you want to go to. 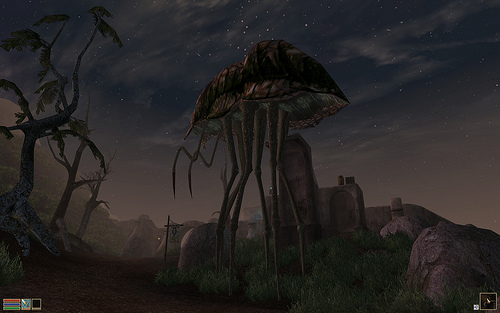 Another problem the game suffers from is faction relations and how it plays into immersion. So every single enemy and NPC has a script attached to it that tells it whether or not it should attack certain people or things. For the most part a majority of NPC's are set to only attack animals and will never attack other NPC's even if they are bandits or assassins. This can be a pretty big problem early on if you happen to wander into enemies who are beyond your skill and you hope to find a guard to help you out. Even if you are in the middle of town and a cultist attacks you the guards will just look you in the eye and say, “That sure does suck, glad its not MY job to keep the riff-raff out of town.” 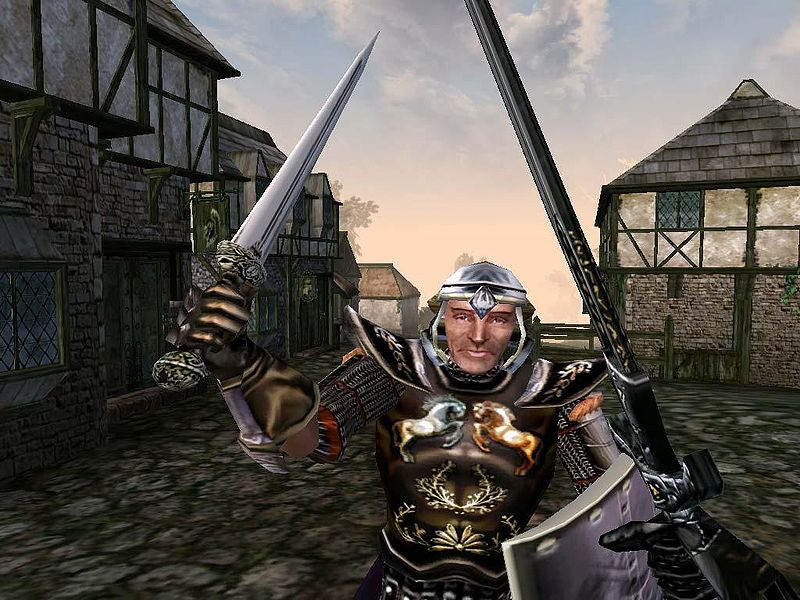 Akatosh forgive you if you get caught jaywalking though.
Suffice to say Morrowind is a very good game and I highly recommend it, unfortunately its only a good game for those who are interested in open RPG's that use outdated mechanics who like a compelling story of gods and elves and want to be a barbarian mage who fights using the fork of horridation. Morrowind has its share of problems but they really only add to the charm of the game as you explore and alien world. Buy this game, you won't regret it. Morrowind is a completely different beast from Oblivion and Skyrim but its a beast that you can tame and ride around like a goddamn dragon rider.

Oh. Did I neglect to mention that Morrowind's expansion packs are as  awesome as they are huge? Yeah. Bloodmoon and Tribunal add many new elements and factions to the game along with entirely new areas with new characters and weapons and shit. Seriously. This ain't none of that "Dee-el-see" trite that publishers are pushing where you spend $20 on damn horse armor and shit. No. You buy the Game of the Year edition and you get both of those expansions integrated into your game. So if you have the option grab the Game of the Year edition over the standard edition it will add werewolves, new spells, and so much neat lore to the game that it's practically a crime to not choose it.