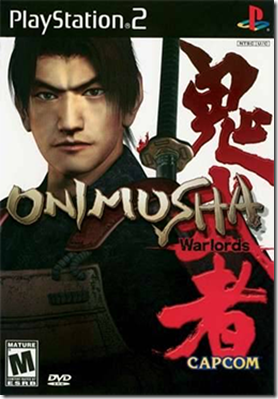 Onimusha Warlords is one of those games for the PlayStation 2 that flies off the shelves quickly at launch and then finds itself at the bottom of the bargain bin later. Onimusha Warlords was an early PS2 title released way back in (insert spooky voice) 2001. The game originally received fairly favorable reviews in the 8/10 margin and sold over (insert spooky voice here as well) two million copies worldwide. Onimusha despite its original favorable ratings over time began to feel dated to most people. A lot of people compare it to Resident Evil and some go as far as to say the game is Resident Evil only with Samurai instead of S.T.A.R.S. 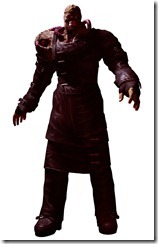 Onimusha and Resident Evil do share similar qualities though, that is undeniable, they both are survival horror games and they both use the same static camera angle which makes killing your enemies occasionally awkward. That’s about where the similarities end.

Onimusha takes place in the late 1500’s where you play as Samanosuke Akechi of the Akechi Clan, who is currently at war with the Oda. For those who are not familiar with history, Nobunaga Oda had a general who he trusted greatly, his name was Mitsuhide Akechi, one day he up and decided to betray Nobunaga and he ambushed him in Okehazama. This game takes place after this event, however Mitsuhide is captured and killed in the battle and Nobunaga is shot in the throat instead of being forced to commit to suicide. However that isn’t the end for Nobunaga as he mysteriously comes back to life to wreak his revenge on the Akechi clan. However it isn’t just soldiers Nobunaga employs, demons have sprung up all around the Akechi territory and are slaughtering everyone. 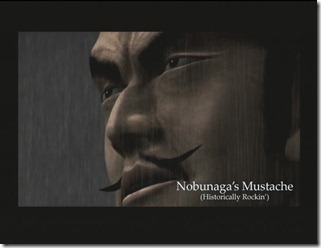 Samanosuke receives a letter that is several weeks old as he returns to Japan after a journey of discovery, the letter is a plea from his cousin to come and save her from what she believes to be some creature which has been stealing away all the servants and soldiers from around the castle. Samanosuke transforms and rolls out o go and save her with his ninja friend who is possibly the worst ninja ever. Seriously she wears orange, orange! 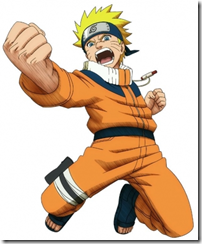 You know what, no she’s way better then that.

The game focuses around the main character who is attempting to save his cousin and prevent Nobunaga and his demon army from taking over the world. You adventure around the castle searching for Yuki and battle your way through hordes of demons while utilizing the power of the Ogre’s (Oni in the original Japanese version and in subsequent sequels). Aforementioned Ogre’s give you the power to destroy the demons, along with some nifty elemental swords you can unlock along the way.

Now this game has tankish controls similar to that of resident evil where you have to turn before you can go forward, once you get used to it the controls things will start to get easier (assuming you haven’t already mastered them after years of playing Resident Evil games). Samanosuke has three types of weapons he can use throughout the game, his trusty Katana (and its variants), a bow and arrows, and finally a rifle each of these has their own uses but for the most part you will spend the game using your sword.

The sword controls are fairly easy to learn and once you get the hang of them you can eventually one-hit kill any minor enemy. At your disposal you have a regular slashing combo, a downward stab for enemies that have fallen to instantly kills them, and finally a quick time move called Isshu which allows you to instantly kill any minor enemy attacking you by pressing the attack button right before the enemy hits you; at your disposal is also a guard which blocks attacks coming at you from any side, guard often, trust me, this game doesn’t play around. Oh, you also have a kick, this kick can be used to attempt to break guards and knock enemies over. 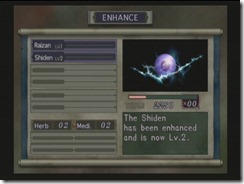 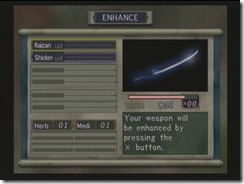 You can upgrade them as well.

Naturally being that this is a survival horror game, health pick ups and ammo for your non-sword weapons are incredibly scarce, so not getting hit is very important as its one of the few ways you can avoid dying. Enemies in this game do not play around, they can guard, and they will attempt to swarm you and murder you. 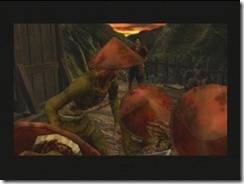 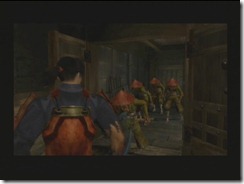 They seem to have an odd sense of fashion.

Iconic of any Capcom survival horror game this game has both puzzles and fetch quest. The puzzles come in the flavor of timed puzzles like trying to avoid being burned alive by columns of fire while exiting a room, and treasure puzzles which involve rotating numbers so they are in order, and ones that involve knowing symbols and inputting the right ones. Fetch quests though make up the largest amount of the game though as you will wind up running from one side of the castle to the other looking for the key to the next door, or the silver plate you need to open the door to get the golden plate. 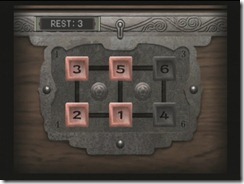 One thing to note about this game, is that the game was originally slated for being released on the original PlayStation but due to the PS2’s release being so close and the game being only 50% done at the time the original game was scrapped and it was instead redone for the PS2. The graphics for the game are not the greatest but for the time in which it was released and compared to other games released at the beginning of the PS2’s lifetime Onimusha has great graphics. Though compared to later games they are fairly shoddy. The game utilizes static backgrounds like that of the early resident evil games, which are fairly attractive compared to the sprites.

Onimusha is one of my favorite games for my PS2 and one of those reasons is that the soundtrack for the game was composed by a deaf composer, soak that in for a second.

I bet his hair was pretty rockin’

Onimusha is a fairly inexpensive game no matter where you look, and well worth the price. The game is fairly short, it can probably be beaten in anywhere from 4-16 hours; amount of time to play the game isn’t a negative factor as the game has a lot of unlockables which can typically only be attained through repeated playing of the game. So go to your nearest lukigames and pick up a copy of the game, if you are a fan of survival horror of games reminiscent of Resident Evil this is the game for you. Oh and just so you know it has two sequels! Which means once you’re done with this you should grab those as well! 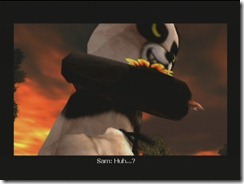