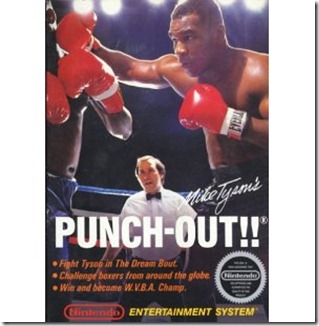 The alternative to getting punched in the face.
At its core Mike Tyson’s Punch-out!! is a port of the arcade game Super Punch-out!! The main difference between the two is the addition of Mike Tyson as the final boss of the game. Believe it or not the reason Mike Tyson’s likeness was added to the game was merely because Minor Arakawa (Nintendo’s President at the time) thought he was really cool and idolized him. This game will always have a found place in my heart as it was the first video game I ever remember playing, even to this day I periodically take it out and attempt to take on Tyson (not that I’ve ever beaten him mind you >_> ). Mike Tyson’s Punch-out is fondly remembered by many as one of the best games on the NES next to Super Mario Bros'. and Legend of Zelda, and this is with good cause as the game itself is solid and very enjoyable to play.
Another version of the game was released some years after titled “Punch-out” Ol’ Mike had been experiencing a hard time and jail sentences and Nintendo wanted to avoid putting a person who was in trouble with the law on their games. Punch-out is nothing more then a direct port of the arcade game where you fight all the boxers from the arcade game and instead of Mike Tyson you have Mr.Dream at the end. For those who are price conscious Punch-out tends to be the cheaper alternative to Mike Tyson’s Punch-out though for the sake of this review you can safely infer that everything I’m about to say applies to both games with the exception of Mike Tyson being exclusive to his own game. 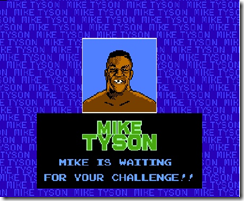 I just don’t trust that face.
The plot of the game is that you are playing as Little Mac, a young upstart from the Bronx who aspires to become the best boxer in the world. However this isn’t going to be easy as you have to face off against some of the greatest boxers in all the circuits like Super Macho Man, Soda Popinski, and the fearsome Glass Joe. Once you’ve punched your way to the top you get to face off against the heavy weight champion Mike Tyson.

This is a screenshot I took write before being instantly one hit KO’ed
The controls for the game are perfect, I have never in my years of playing this game every lost due to poor controls (I have however lost due to just plain sucking at it though). The controls are simple with the D-pad controlling your dodging, ducking, and whether you want to punch your opponent in the face and A and B controlling the left and right punches respectively. A neat thing about the gameplay is that each boxed has special moment during the split second before an attack that if you were to punch him would either instantly KO him or get yourself a Star for a super-punch. 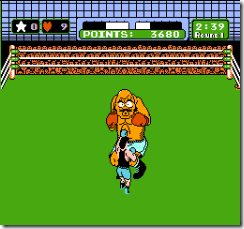 They make funny faces.
The soundtrack for the game is both superb as it is subtle, I find myself periodically humming the title screen theme every so often and sometimes even the song that plays when Little Mac and Doc are training. Each character even has their own theme song which plays a the start of the first round, which is really nice and gives a feeling that each match itself is unique.
The graphics for the game are very good for a mid-life NES title, each character has a decent amount of detail to them and displays a range of facial expressions during any particular match. Another interesting thing of note is that prior to the first round starting the opposing boxer will perform an silly animation to accompany their song.

Though some aren’t even worth it.
One thing that is very important for any person to realize before playing this game is that it is going to be hard. This game requires deft reflexes and good timing, if not then you won’t even make it to Mike as Super Macho Man will destroy you with his over the top punches. Reflexes though are one of the things which can be honed, so don’t get to upset while playing if you wind up losing against Piston Honda the first couple of times. This isn’t a game which you can pick up and clear your first time through it requires practice, unless of course you have amazing reflexes and can instantaneously analyze every boxers weak point.
Mike Tyson’s Punch-out is a very solid and fun game that I personally would recommend to any fan of NES games, it’s a game which you can pick and put down and once you’ve played it and mastered it you will never forget how to play. The game is a metaphorical bicycle, my father was the one who had me play this game during my younger years, and he himself after not having played the game for over a decade sat down with me to play it and did something that I still haven’t been able to do, he beat Mike Tyson. Long story short you should get this game, it is easily worth the money and if you aren’t a fan of gaming by yourself this is the perfect game for passing the controller around with your friends to see who can get the farthest without being knocked out.

That face Mike Tyson is punching? It’s yours.
Posted by Unknown at 11:50 PM