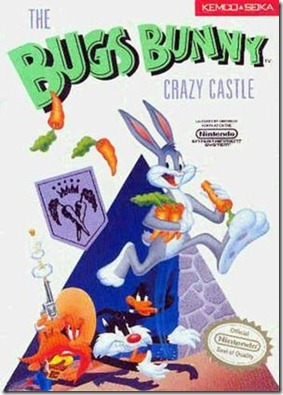 The Bugs Bunny Crazy Castle (Grammar fail?) is a palette swap of a game based on the movie Who Framed Roger Rabbit created by Kemco. The exact reasoning for this game and it’s subsequent sequels existence is purely due to a rights dispute in which Kemco lost the rights to Who Framed Roger Rabbit and had to find a way of sending a game overseas somehow. Just as all seemed bleak for them they attained the rights to the Looney Tunes and swapped all of the characters from the movie with lookalike characters from the Looney Tunes, they would keep this trend going into this games many sequels and more or less every subsequent game they would ever make. The first of this series of games I ever played was the second one and not the first so imagine my surprise to realize that the sequel was much better then the original, though this is more likely due to them both being palette swaps of different games, though that’s a story for another day. 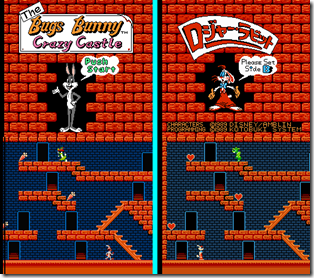 The premise of the game is that you are Bugs Bunny and you are attempting to traverse the Crazy Castle and reach you’re girlfriend Honey Bunny. 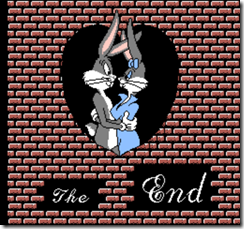 Why is it that we don't remember her?

I digress though, you go through many seemingly identical levels in the game while being inessentially pursued by other iconic characters from the Looney Tunes like Sylvester, Foghorn Leghorn, and Yosemite Sam, all of which may be partially retarded as at certain points they kind of spaz out and instead of flat out murdering the hell out of you they just decide to walk away instead allowing you to complete the level. On any given level there may be multiple’s of these characters and very often they will each be a different color which I assume is due to the game wanting you to have a better grasp of the location of where each of these guys who are trying to kill you are located. The objective of any given level is to collect all of the carrots which are placed all over the levels seemingly at random, and once you have grabbed all of the carrots you win the level and Bugs does a really weird dance involving waving his arms. 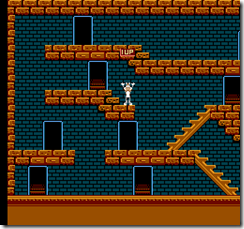 The controls are basic, you have the ability to ascend stairs and ramps, and if you pick up a fist get the ability to use that to kill one of the enemies who are trying to murder you, there are other less common items like the ink bottle which makes you invincible for a brief period of time but the fist will be the weapon you will see the most often. The only other way of killing any enemy is to drop one of the many objects strewn throughout the stage, to actually drop the objects you have to push it off a ledge onto an enemy below you. The actual task of knocking an object on the enemy can be difficult or hard depending on how fast you are moving and the item in which you are trying to drop, I’ve noticed that when you run at an item and hit it the item will usually move 2-3 spaces instead of 1, I’ve also noticed that some lighter objects like the bucket will usually move 2 spaces instead of 1. One thing I must mention is the players ability to ascend and descend from stairs is kinda bad, it’s reminiscent of the stair climbing problems the first Castlevannia had in which once you were on those stairs you were dedicated to going up or down.

I can’t say much for the graphics/animations of the game but for a relatively simplistic platformer with no real story or true premise aside from being something quickly slapped together by Kemco in order to get a game Stateside. The Bugs Bunny Crazy Castle is an alright game, it by no means is perfect. Honestly though I would not really recommend this game unless you truly are a collector or you want to experience a game with no content. This game may be fairly solid mechanics-wise but it isn’t something the average gamer would really want to play unless they are into collecting or really want to play a Bugs Bunny game. I bought this game a long time ago and I go back to play it once in a while… yet I never really feel fulfilled playing it; I attribute all it’s problems to the fact that the game is obviously a rushed job of a poorly palette swapped game.

TL;DR : Buy this only if you are a collector or like Bugs Bunny.