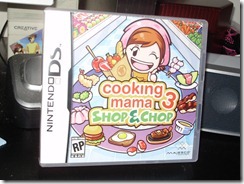 With the Holiday shopping season hitting full swing and many clamoring to get those last minute deals before Christmas it is now more so then any other point that people are more susceptible to accidentally buying a bootleg game. The internet is the prime suspect for perpetuating these fakes most notably Ebay and iOffer which are both poorly policed for people or groups which sell bootleg copies of any product. Typically the games are offered at unbelievable prices or set up as auctions where they wind up selling for significantly more then the game normally sells for. A prime example of games going for that which they are not valued at is the Pokémon series of games; the Pokémon DS series of games will often be found floating around one of the auction websites for prices ranging from $5-$10 or start an auction at .99 cents.

There are other a great deal of other possible problems but these are the most notable ones and the ones most commonly encountered in the purchase of a bootleg game.

Now that I have turned you away from the prospect of knowingly purchasing a bootleg game I shall now explain how to identify aforementioned game. We shall begin by discussing the Label as that is commonly the first thing you will see (in assuming the game you purchase does not come with a case). The first and most telling feature of a fake game in general is the wrong art on the game, very often bootleggers will take the art from the cover and just shrink it down to label size and slap it on there. 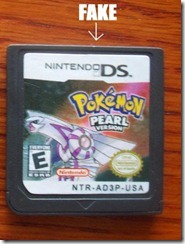 It is imperative that before the purchase of a game off a non-reputable site that you familiarize yourself with the label arts for the games and the cover art for the case so you can spot early on whether the game is a fake or not. A google search will usually yield the desired results and if upon doing the search you feel wary of the game then I recommend contacting the seller and asking to return the game.

Now upon further examination of the label you should see the following in these EXACT places: 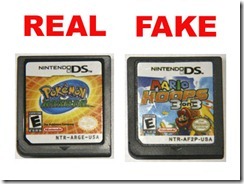 Before advancing to the back of the cartridge lets look at the label as a whole. Is the label off kilter? Is the label a little to round? Is the label just not there? These three things are signs of a fake as real Nintendo DS games have their labels factory cut and pressed.

Now onto the back of the cartridge, on the back you should see embossed into the back of the game the Nintendo Logo, the code NTR-005 PAT. PEND., and below that you should see a code in ink that may fade over time so you will have to shine light on it at an angle to see it. The code will be nine alpha-numeric digits that make up  the games serial code and will ALWAYS be on the cartridge. Typically fake cartridges will be lacking in all three of those marking on the back of the game, however some high quality bootlegs will have often have the Nintendo logo and NTR code embossed on the back, though very often they will be larger then they should be. In my experience I have never encountered a bootleg with the ink serial code below the NTR code, so that can be a telling feature of a bootleg game. 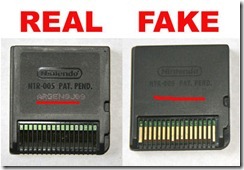 Now if by this point you have not found anything out of the ordinary you will have to look at the games contacts to see if there is a serial code of varying digits or if it only has the words “Nintendo” on it. This is a slightly more unreliable way of telling, because there are Nintendo DS games that do have either of those two on them. Typically if the game does not have the serial code you can consider it a fake. Just use this means of checking with a grain of salt as unlike GBA games you cannot just pop open the game and check the board for the logo and code and know its legit. Fake DS games will always label the board with the Nintendo logo, which is why you, depending on the game, have a 50/50 chance of being right in using this method in determining the legitimacy of the game.

The best way to avoid getting a bootleg game is to exercise both caution and prevention. On Ebay and other websites you will notice that some items are being sold in countries they are not native to and this is generally a warning flag for a bootlegger, the usual culprit will be Hong Kong, China as it would appear they mass produce bootlegs and set up many identical accounts to sell off their goods. These bootleg games will usually be sold without their original cases and instead will be sold in tiny plastic cases. Another warning flag you will notice is the awkward descriptions that will be given to describe the product they are selling;

“The game is used, 100% new,
no box and manual,only cartridge,Games are in English.
This game has been tested carefully and found to be working perfectly! Please assured to buy. If you encounter any problem,please feel free to contact us. we are here to assist you at any time!Thanks 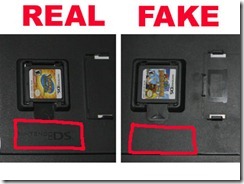 Oh and all cases should have Nintendo DS embossed in it.

It is not to say that they aren’t cooperative when you attempt to return the game, but you should avoid purchasing english games from countries that are not english speaking. I advise exercising the same amount of caution as recommended in my previous shopping tips, i.e. don’t buy games from places that you are not native to or have dubious/awkward descriptions.

Well Have a Happy Holidays!