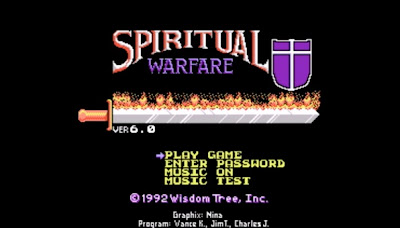 Well gang, it's Christmas time! Today we'll be discussing Wisdom Tree's "Spiritual Warfare" for the NES. I had a fun time reviewing it - it's a pretty wacky game with a crazy premise. I know that Bible games have been done to death online, the Angry Video Game Nerd did four excellent episodes on the matter, and they can be a touchy subject for a few - but in this review I'm tackling a game that actually has a few great highlights. While it's not the best game in the world, it has its merits. I poke a little fun but am not out to hurt anyone's feelings so I've reeled the unabashed sarcasm in a bit. Hope you guys & gals enjoy and have a safe and happy holiday!
- Chris

The term "spiritual warfare" evokes many images in the mind. Take for example: The Crusades. A bloody chunk of history where religious wars raged in the late 1000's up until nearly the 1300's. How about the battle that has raged in the Middle East between Palestinians and Jews for as far back as anyone can remember? In truth, people have been killing one another over beliefs shortly after the first two people looked up at the night sky observing the majesty of the cosmos and disagreed vehemently on how and/or why it came into existence. That's perhaps a bit of an oversimplification; often politics, land disputes, economics and the rise and fall of empires have more to do with supposed religious warfare than simply the opponent's deity of choice. It is, however, a motivation when it comes to conflict between nations, sects, tribes, etc.

A quick Google search of the term "spiritual warfare" also brings up a much different meaning - a blanket war against evil. It could be as simple as the spiritual conflicts within one's self - IE: the kind of stuff that Ronnie James Dio would sing about. More often than not it's a term that describes the actions of die-hard, unwavering, radically conservative Christian leaders (the kind that really seemed to spring up in the early 80's with folks like Pat Robertson, Oral Roberts, Jimmy Swaggert, Jerry Fallwell, and the Bakkers.) The kinda folks who would tell you that your kids can't watch Teletubbies because Tinky-Winky is a symbol for gay pride, or that Harry Potter is a Satanic abomination and an icon for the Occult. Spiritual warfare is about keeping out "evil influences" in order to live a better life. So hide your Quija boards, Marilyn Manson records, skateboards, black clothing, and video games because the fun police just arrived!

That is, unless your video games are made by developer Wisdom Tree! Wisdom Tree is a small independent game development house that would make Christian themed games that would be sold in Christian bookstores. An interesting fact is that Wisdom Tree is a branch of game developer Color Dreams which also released such wholesome games as "Robodemons" and "Menace Beach" (but I'll save those wonderful games for another time.) Wisdom Tree, Color Dreams, and Bunch Games (another branch of C.D.) have a reputation for putting out sub par games that had to be released unlicensed, presumably because Nintendo had fairly strict content policies and religious references were certainly one of them - as well as policies against games that consistently look like they were made by a third grader. Nevertheless, Wisdom Tree released the game Spiritual Warfare in 1992. This is the kind of game that Stewart from "Beavis and Butthead" or the Flanders kids from "The Simpsons" would have loved!


The first thing you'll notice if you've played any of the other Wisdom Tree games is that the graphics aren't all that bad. They are certainly a marked improvement over some of the old Color Dreams games like Robodemons. Also, with most of these Wisdom Tree games you have the joy of guessing which game (Color Dreams or popular licensed game) that this game is trying to emulate. In the case of Bible Adventures, the game plays a lot like Super Mario Bros. 2. Some of the Wisdom Tree games like Sunday Funday are just retooled versions of older Color Dreams games. In the case of Spiritual Warfare, it's an awful lot like Legend of Zelda. Let's face it, there's a lot worse games that you could base your knock-off game on and for the most part Wisdom Tree does a good job. Remember the old man who would give you advice, items, etc? Well, here it's an angel and you trade in doves as currency for different varieties of the "fruit of spirit." The menu screen looks similar, the level design and perspectives are similar, and overall the game has some of the fun elements of Zelda without some of the frustrating difficulty.


So what is the aim of Spiritual Warfare, you ask? To convert the dirty, wicked heathens in your neighborhood and collect the six pieces of the "Armor of God." These pieces of armor are scattered around the game and collecting them will help you access otherwise inaccessible areas. For an unlicensed game, there are actually quite a few different kinds of enemies - though it's often a mystery why they need saving. Sure, the gang members carrying around switchblades certainly could use a little guidance at the very least. But why is the kid with the basketball committing a sin? The kid playing hide and seek? The boy with the ice cream bar? Construction workers? What sins are these people committing that they are in such need of a spiritual awakening? I suppose that's the blessing and curse (some puns intended) of having so many different enemies is that they don't entirely make sense. I suppose if everyone were a thug, a drunk, and a prostitute this game would feel very lazy. At least half or better of the enemies in the early parts of the game can be saved with one quick toss of a "fruit of Spirit." The further you advance in the game, the more you should upgrade you fruit in order to convert those who need a little "extra convincing." Those who instead spit a demon out of their heads will take an extra piece of fruit or perhaps a vial of God's wrath. That's right. A little boy running around trying to preach the gospel carries around vials of God's wrath that he can toss at strangers like a bomb and turn them into doves. I think this kid is taking "spiritual warfare" a little too literally. This ain't 'Nam, this is suburbia! Overall though, the gameplay is actually kind of fun if you get into it.


Every once in a while an angel will come down from the sky and test your Biblical trivia. For the most part these questions are a cinch even to those fairly unfamiliar with the stories in the Bible. Basically, your best bet is to guess the most "common sense" guess imaginable. Sure, there are a handful of comical answers you can provide but just assume that Satan didn't say that it's easier for a camel to pass through the eye of a needle than for a rich man to enter the kingdom of Heaven. The benefit of answering these Sunday school questions is to gain more doves, thus being able to afford more powerful fruit against the infidels you're supposed to be saving.

Not unlike the other Wisdom Tree games, there are a handful of frustrating moments in this game. For starters, if you instinctively know which direction you should be heading then the game is rather linear. However, if not - you can find yourself walking around in circles. I played the game three times before I bothered to talk to the boy with the balloon and grab the belt underground instead of walking around aimlessly blowing up gangsters and sugar-high children with God's mighty wrath. It's easier to get lost in the city, especially with the construction workers blocking your path and just how big the city really is. Friendly advice - don't go to the bar. Not even if you want a Pepsi and your intentions are simply to convert the wicked drunks inside. You'll be chastised by an irate angel and he'll steal your gear. Oh, and this can lead to  areas where you can get trapped. I don't really know how I did it, but I believe it was in the suburbs area where I went through a little maze and blocked myself in with falling pillars. I didn't go and recollect my belt of truth before entering the room and couldn't move the pillars, blow them up, or anything else. I had a "pray" option in my menu but it didn't do much good. For a kid who can throw around God's wrath willy-nilly, he sure doesn't have a direct enough line to the big man to help him out of a pickle like that. Another problem which, let's face it, many NES games suffered from is annoying music. The first time you hear that valiant and triumphant hymnal - it pumps you up for some religiously fueled justice. However, by minute 10 you're tired of hearing this song and have to mute the game lest you go insane. Though truth be told, and I know this is heresy (puns intended,) but the original Zelda theme can get grating at times as well. The other sound effects are decent enough - the bomb explosion is actually really impressive for a game that would otherwise be classed by some as a D-list knock-off game.


So how does Spiritual Warfare stack up overall? The premise is insane and more than mildly offensive to non-Christians if you break it down to its core concept, the music is grating at best, but overall it's a game that's hard to put down. Unlike some of the other unlicensed games I have this is one that I keep coming back to! The gameplay is fairly solid (because it's essentially a watered down Zelda) and while it has some level of challenge, it's easy enough to pick up and play for a half hour and kill some time. I would recommend this game (and not even in an entirely ironic way, either.) Folks like me are bound to enjoy it for the absurdity and mildly disturbing premise (and it's the kind of game Moral Orel would be crazy for!) Folks who are more religiously minded might find this a good game for their children. Do I think that blowing up non-believers with the wrath of God is a great message for children? Heck no. However, if you want your children to pick up some bible study questions and stimulate them with a video game in the process, this just might do the trick. 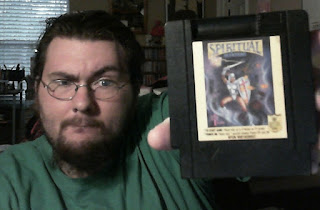