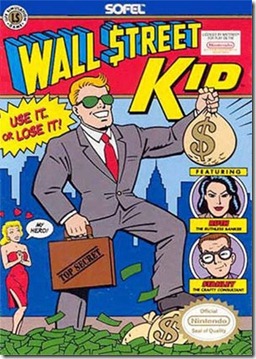 The Nintendo Entertainment System (NES) has a very diverse array of games and I guess it wouldn’t be to far off to understand that there would be games of varying themes and genres, but there comes a point when I must put my foot down and say “No Nintendo, that is NOT a game!” however in order to do that I would need to go back in time twenty odd years or so to tell them that it’s an awful idea to allow it to be published. Though lets get to the meat of the situation, The Wall $treet Kid was created by SOFEL a Japanese company that for a brief period of time in the late 80’s and early 90’s made a bunch of lackluster mediocre games. Wall $treet Kid and Casino Kid are their most notable titles which screams volumes for how great their games were to begin with.

The premise of the game is that you are the character whose name we do not know aside from the fact that his last name is Benedict is heir to a vast fortune left to him by his now deceased uncle, but, he must first prove himself before he is given the money that is his destiny to obtain. Over the course of the game you have to jump through several financial hurdles over a several month period, the first of which is that you need to purchase a mansion, to do this you need to double your starting money by playing the stock market, this all winds down with you purchasing a castle and getting your inheritance.

He’s eerily giddy about all this. :/

Before I go on about the gameplay let me make it known to you that this game has no story to it aside from the beginning and the end, those are your two story elements aside from a brief moment in between that isn’t particularly significant.

Stocks and the stock market are the core of the gameplay and you will focus mostly on them over the course of the game. The stocks in the game constantly fluctuate on a daily basis and for the most part you have to use your gut to decide where to invest your money in order to turn a profit. The newspaper will every day inform you of what business’s are on the up and and up (though it’s usually not a good idea to invest in stocks that have already increased in value by a lot), your other source of information is Connie who will sell you information on what stock will most likely see profits over the next couple of days or lose profits (this is called insider trading and is illegal by the way, not to say that the game will penalize you about it :/ ). You at any point over the course of a day have the option of buying or selling stocks or just looking over your portfolio, you can also talk to Stanley a man who will be the instruction manual for the stock market, you pay him money, he blathers about how it works. Another way of getting money in the game is by taking a loan out at the bank which you can invest in the stock market, though this can only be done once you have your house and even then you have to pay the bank back 105% of the loan by the end of the month.

Not Shown: The clause that says that if you don’t pay on time they break your legs.

The other to facets of the game are your girlfriend and your health. Your girlfriend will require attention which can be given by taking her out to places ever so often, if you do not take her anywhere for a while or purchase her any of the gifts she demands she will ultimately wind up leaving you and you will receive a game over (more on this later). Your girlfriend (named Prisila the Pricy Prima Donna[seriously]) will periodically call you up about buying her things like a dog or a car, buy them. You may be wondering why I advise you to buy these things, well it is because her marrying you is imperative to getting the inheritance (yeah that was a bombshell to me as well) so it is imperative that you keep her happy. Now your health is another important thing though unlike Prisila you only have to go to the gym every so often to accommodate that. If you don’t exercise for a while you will get a game over, yep that’s it.

The game has surprisingly good graphics and character designs even for a later life-span NES title, though this is countered by that fact that there are no moving animations. Music-wise the game’s tunes are kinda droll and while I played through the game they wound up becoming white noise, though while I noticed it I didn’t enjoy it.

The Wall $treet Kid isn’t a great game unless you are interested in the stock market, I personally found it amusing for a little while but overall can’t say I really enjoyed the game aside from the couple of hours I spent contemplating the amount of douchieousity the main character Mr.Benedict must have to look the way he does. The game is lackluster and playing the stock market is tedious and if you make any mistakes you inevitably wind up with a game over which for me at least was very common. If you really want to play the game, then do so only if you are a collector or feel like derping out on a simulator of the real life stock market.

I want to punch him in the face.

Below I am including a very special guide for those who actually want to play the game and don’t understand some of the jargon you will notice them mention things like “Blue Chip” is on the rise or something well this is what each of those terms mean in regards to companies:

Blue Chip
ATNT: A communications company that once nearly had a monopoly, and now must compete for market share due to competition.
Boing: Very strong domestic and export manufacturer of airplanes. Excellent track record.
Xearox: Strong, innovative producer of copying machines that dominated the market for several years. Also performs financial services.
YBM: A dominant player in the home computer market. Now has to compete with Yapple.
Yapple: Has very strong new product lines, and is capable of substantial growth.

Speculative
Bethleham Steel: Despite new management, a recession, and industry uncertainty, BS is showing profit.
Chryer: Received low interest loans to help it back on the road to profitability.
Pan Mam Airlines: Former giant, now has high debt and low assets. Sales are high but so are losses.
Strayhound Buses: Once a major bus line, the division was sold in order to switch over to the manufacture of consumer products.
Teradying: Made recent acquisitions that help its market position, but losses are still shown.

Growth
American Depress: Financial services company with high value and strong growth.
Exconrail: A company trying to go straight and get its kids back, it's now a railroad leader and looking to expand to other industries.
Firedman's Fund: Successful insurance firm. Looking to expand into other areas.
Reebucks International: On the way to being the number one footwear manufacturer, but has high debt.
Charles Schlob: Large, discount securities firm that was recently bought back by its founder and is experiencing much success.