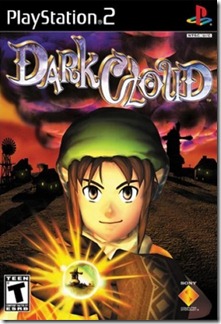 Dark Cloud is an RPG for the PlayStation 2 and was originally intended to be a launch title for the system however it was instead released a year later. I personally have some pretty fond memories of this game as it was the first PlayStation 2 game I ever purchased. I remember traversing through the many dungeons in the game and building up my weapons to take on the boss’s at the end of each dungeon, I also recall the time I spent trying to get every town set up perfectly so that the people in it would all be happy and reward me for my efforts. In my opinion this was the best of the early RPG’s for the console (not that it had many to contend with), though throughout this review we shall see if it truly is as great a gem as I believed when I first bought the game.

Being that this is an RPG story is a strong element of the game I find it best that we explore this aspect first; Dark Cloud is about a young boy named Toan (or butt, or whatever it is you choose to name him) as he is tasked with the reconstruction of the world by the Fairy King after the Dark Genie destroys a good deal of the world (by world I mean like three towns, and a giant robot). Over the course of the game Toan explores the mystery surrounding the origins of the Dark Genie and a way to ultimately destroy him, over the course of the adventure he travels to many places, a desert, a jungle village, the moon and over the course of the adventure he befriends like-minded people who also suffered from the attack of the Dark Genie. 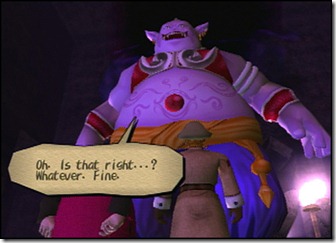 A damn fine Genie of Darkness he is.

This game is heavy on two major elements, story, and dungeon exploration, and both of these elements will be the main meat of the game. Dungeons average about 20 floors but the last dungeon and the secret dungeon are the only real exception. There are additional elements to the game, which are not mandatory but add quite a bit of depth (and some grinding) to the game. These elements are the fishing points system, and the weapon building system, both of which require time and patience but are greatly rewarding in their own respects.
Dungeons in this game are fairly standard, one entrance one exit and a hella lot of monsters to battle. However there is more to every floor then meets the eye, each floor is broken up into two parts the second of which is optional as each floor (excluding boss floors) has a “back floor” which is a floor you can only access through usage of a key on a special door which takes you to the back floor. The back floors generally have stronger monsters, but to naturally offset this the treasure chests on back floors tend to have some pretty great surprises be they rare weapons or gems which you can sell or use. Back floors however are not the only thing you need a key floor, to advance to the next floor and in certain instances to get to a certain part of the main floor you need to find a key, the key to the next floor is always held by an enemy, though the key for the other parts of the floor can only be found in treasure chests back floor keys can occasionally be found in chests as well and at one point in the game be bought. The main point of the dungeon crawl though is to collect the Atla which are large orbs containing things like people, houses, and various odd and ends. You seek to collect all these so that you can rebuild whichever town you are currently in at the time, though I’ll talk about that later. 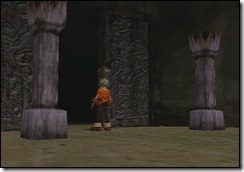 It really makes you wonder how a peaceful village manages to remain peaceful with a dungeon of horrible murderous monsters living right on the edge of it.

Another important part of dungeons is quick time events, typically each dungeon in the game has at least one quick time event where you need to press buttons as they appear on screen, these can be frustrating at first but once you develop a sense of rhythm for them they become immensely easier. 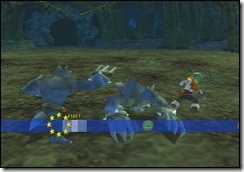 Not Pictured: My rage at making a mistake for the third time and dying.

Now story in this game comes at whatever pacing you so choose, as a majority of the story happens as a result of either:
Upon completing either of those a story event will generally follow. The actual overarching plot to the game is fairly fanciful and is ultimately solid enough, however the writing for the game has moments where it becomes incredibly subpar though on the whole it doesn’t detract from the overall game. The writing has it’s moments where it is honestly funny… 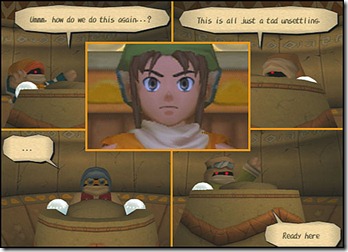 I get the feeling that they aren’t exactly teenagers with attitude.

Actually I take that back, this game has moments where it’s downright hilarious, I have on my hard drive a LOT of absolutely hilarious screenshots showing how amazingly funny and/or awful this games writing can be at times. Why one of my favorite moments happens while you are in Queen's and you are attempting to get a Psychic to tell you the future.
Now for the weapon building mechanic, now throughout the game you do not gain levels in the traditional sense where killing an enemy grants you experience points, instead every time you slay an enemy your weapon gains “Abs”… 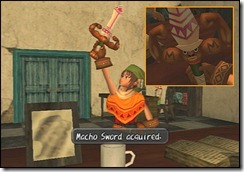 Um…
These “abs” are the experience your weapons accrue, once a weapons abs are maxed out you can upgrade it. One of the more interesting parts of this is that you can equip to your weapon “attachments” which will increase certain stats or effectiveness upon a certain type of enemy. Once a weapon has been upgraded the necessary amount of times and has had its stats increased to a certain point you are presented with the option of building up a weapon into a much stronger weapon essentially allowing you to continuously evolve a certain weapon over and over again without ever really needing to change to another (though you will want to as the best weapon in the game can only be acquired by training up a specific sword). Another nifty aspect of the weapon building mechanic is that once a weapon has been upgraded to level 5 you are presented with the option of “Status Breaking” it, this would allow you to turn it into an attachment which would retain around 60% of the weapons original stats that you are able to slap onto any particular weapon. Also certain weapons have abilities which give you bonuses or can be hindrances, they are transferrable through Status Breaking so combining the best abilities into a weapon is a good way to get ahead in this game. 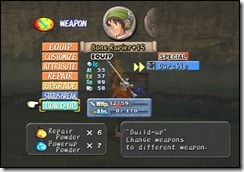 I wonder if it’s made of real bone?

Admittedly I’m no fan of fishing and this is probably one of the least explored mechanics of the game for me, so bear with me. In Dark Cloud you will periodically come across bodies of water and after you gain your fishing rod you are able to fish in these bodies of water using whatever bait you find or purchase. Whenever you catch a fish you gain points for it which you can exchange for prizes, certain fish are worth more points then others and specific bait can attract high point fish (poison apples, trust me). Fishing is essentially the money farming aspect of the game as once you figure out the best bait and location to fish you will be able to hook high pointers that you can exchange for prizes you can immediately sell. Oh, there is also a fish that tells you how to disarm any chest once you’ve caught it. 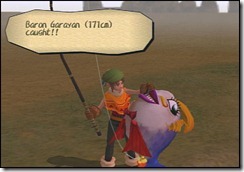 Man I hate fish, even in video game form.

Now for the most important facet of the game, the balls, the Atla are essentially Dark Clouds version of Legos and they are the building blocks required to rebuild the destroyed locale. They are found in the dungeons and it’s up to you to put them back together once you reach the surface again. 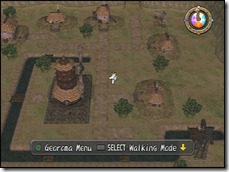 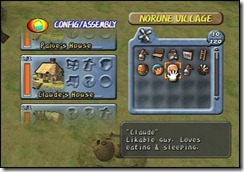 This must be how god feels.

Upon completion of any particular structure you are tasked with placing it in a spot the resident of it wants, which can be quite hard or quite easy depending on the person. You are also treated to events once you complete a place, some of which are hilarious, some traumatizing, all of them end in you receiving an item. 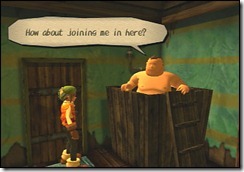 Toan can never unsee this.

Rebuilding towns is the main part of the game which is essentially dragging and dropping until everyone is happy. Lets review shall we?

Now there isn’t much to say about graphics being that this is an early PS2 game so I won’t dwell on them, however I will admit that the characters in the game are incredibly expressive which in my book is a plus. The games music is subpar and does a good job of being background music but is by no means stand-outish enough to really get stuck in your head. 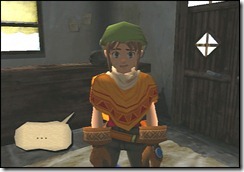 I honestly feel sorry for him at certain points.

Dark Cloud in this reviewers humble opinion is an absolutely worthwhile RPG, it has lots of content, a great story, and it has tight controls (they are perfect and I feel no need to delve deeper into the topic). There are some quick time events which can be frustrating but over all the game is great and worth purchasing.

Fun fact: This game is by Level-5, you know those guys who made Professor Layton. 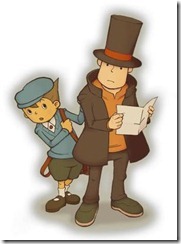 Luke this review reminds me of a puzzle!
Posted by Unknown at 9:27 PM