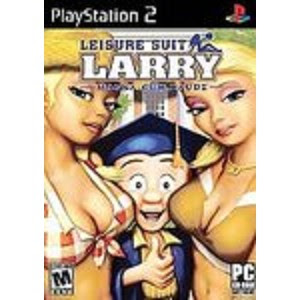 This Halloween, I brought you guys and gals a tale of terrifying terror. A game so horrifying that you wouldn't wish it on your worst enemy's worst enemy. It's called Leisure Suit Larry: Box Office Bust and it's a sad, sorry excuse for a game. The humor was humorless, the characters were unlikable, the scenery was one-dimensional, and the controls were absolutely broken. For a current-gen game, it wasn't close to worth the already budget price it sold for at release (roughly 30 bucks) and I would really think twice about it at just about any price.
However, Leisure Suit Larry games have not always been this mind-meltingly bad. As a matter of fact, I grew up on these games! Leisure Suit Larry: In the Land of the Lounge Lizards was my introduction to adventure games at age 12 and by 16 or so I snatched up the whole collection for the PC. My favorite two games of the series are 5 and 6. LSL5 was innovative in having you spend half of the game as Larry and the other half as Passionate Patti (as well as showcasing a new art style that would be adapted and refined over the next two games) and LSL6 had voiceover work, great animation & art for its time, and humorous puzzles. Sure, the games were supposed to be for adults and had some raunchy humor and situations - but nothing in those games was ever near as explicit as one of those American Pie films. I discovered my love for the adventure genre through Larry Laffer's lovable antics and while I still enjoy a great variety of adventure games - King Graham never had to occupy a Pimp's attention by turning on scrambled Skin-e-max. That's the kind of shenanigans that only a nerdy, 70's obsessed 40-something could get into.
Leisure Suit Larry + Organ = comical caption!
Sadly, the late 90's resulted in what was once Sierra Online crumbling with big layoffs (including Larry creator Al Lowe,) Ken and Roberta Williams leaving the company and it changing hands numerous times - the future of Larry was uncertain while in the hands of new owners Vivendi. However, Larry was (more or less) resurrected in 2004 in this Xbox and PS2 college-based Larry game; Leisure Suit Larry: Magna Cum Laude. The game was developed without any involvement from original creator Al Lowe and many audience members panned it for not feeling like a legitimate Larry game and for relying too heavily on minigames rather than more classic adventure strategies. I originally felt myself split on the game. Tes, the game was funny (but in a more sophomoric way that the original games were,) and to me the minigames never got too intrusive, and the new dialogue feature was actually a clever invention. Also, it seems true what they say - "absence makes the heart grow fonder." I've been without the game for years now and I miss it. I realize that my first reactions were harsher than they should have been. So let's dig into the pros and cons of the revamped Larry. Heck, at least it ain't Box Office Bust! 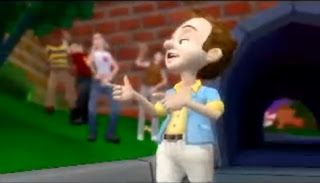 Ladies...there's room in my heart for all of you!
In Magna Cum Laude, you star as Larry Lovage, the nephew of that iconic loser Larry Laffer. The plot centers around Lovage's community college exploits as he tries to earn a spot on the television show Swingles. You must succeed (however embarrassingly) to gain the affection of all of the main female characters in the game in order to gain your spot on Swingles and finally complete the game. You'll run across country cowgirls, Joizy Shore foul-mouths, a mime with something to hide, a granola feminist and many other interesting college stereotypes. All-in-all the plot is not too far removed from the original Larry games meets the film "PCU." Throughout the game, you'll even receive advice from your ol' uncle Larry - voiced by none other than Jan Rabson of LSL6 & 7 fame. So what exactly is it that fans didn't dig about this new incarnation of Larry? 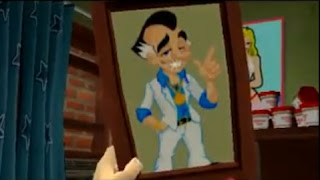 Uncle Larry Laffer - the shining beacon of wisdom
For starters, the minigames in MCL make up the bulk of the gaming experience. Sure, you can walk around and interact with different objects, collect coins and secret items (all adventure game staples;) but it's these conversation games and other minigames that were unfamiliar territory for gamers who were used to typing in commands for Larry and had fun hunting through a mountainous inventory to find what item will help you to enter a cruise ship or survive for days adrift in the sea. In conversation minigames you control your little ah-hem "swimmer" through various obstacles to different options highlighted by smiling emoticons, beer-steins, frowny-faces and other assorted choices. Wherever your swimmer lands during a portion of the conversation dictates what Larry is going to say next. While this was jarring at first - I've come to appreciate how clever this minigame is. It leads to a game experience that can be different every time and some really wacky Madlibs style conversations with members of the fairer sex. The highlight of the game has to be a call-and-answer version of Grease's "Summer Nights." 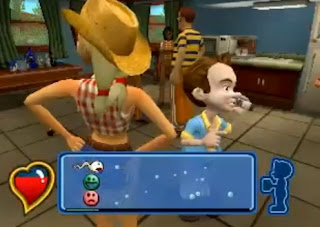 Hellooooooooooo Cowgirl!
Unfortunately, some of the other minigames are not quite as clever or amusing. Just as the liars dice minigame in LSL7 had me pulling my hair out - Magna Cum Laude has the dreaded quarters minigame. If you're not necessarily the most coordinated person in the world, this game can be absolutely maddening. There's also a dance-off mini game and a trampoline minigame both of which can be frustrating too - but not near as much as the quarters one. You'll run into other minigames here and there, but thankfully most of the game tends to revolve around the conversation game, which if you're a fan at all of the humor of this game; should be considered the biggest strength that MCL has going for it. Sure, the humor isn't quite as subtle as Al Lowe's - but there's a lot to love in MCL even if it's a goofy, fratboy, college humor sort of love. 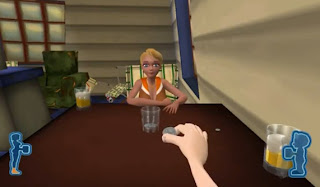 Forget anything nice I said about ... anything.
The graphics and sound are really well executed here. There are a handful of licensed songs sprinkled throughout the game and plenty of fun, wacky dialogue to enjoy and the in-game score is fun and funky without being too "in the way." Since most of the game is dialogue based anyway - the background score is there without being too overbearing. The graphics are cartoony and goofy as heck - but work perfectly for the overall comedy theme. Some characters have harsh pixel edges - so don't expect top-of-the line Kingdom Hearts level graphics here, but for a 10 year old game it holds up really well and would need very little tweaking to compete with today's batch of humor-based, cartoony games. Comparing Magna Cum Laude with Box Office Bust is no comparison - this game trumps Box Office Bust in every facet. The characters don't look like deformed aliens with crooked smiles and dead eyes, the levels are cheerful and bright, the ladies are as sexy as cartoon video game ladies are supposed to be, and the camera doesn't become a nuisance with a mind of its own.
While Magna Cum Laude isn't the funniest, smartest, or best entry in the Leisure Suit Larry franchise - it certainly isn't the worst. Over time I've come to appreciate what the developers were trying to do with this game and the changes they made to the Leisure Suit Larry formula were mostly positive (aside from a few less than wonderful minigames.) I would highly recommend this to anyone who likes goofy, fun, cartoony and most of all raunchy action/adventure games. It's a fun adult-themed ride through all of the best (and worst) parts about college life and you can buy it or put yourself on the waiting list for it right now over at Lukie Games! The holiday season is upon is - buy it for someone you love (or someone you want to impress with your fine taste in gaming excellence.) 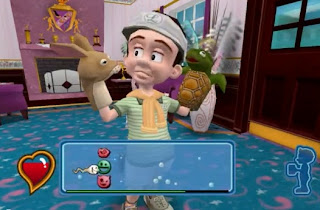