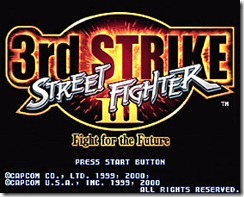 So cool it needs two subtitles!

Street Fighter III is the third entry into the main series and is apparently the ultimate fighting game for the future (It’s their third strike at it to). Along with a new roster of characters along with a few returning faces the game boasts a newer refined combat system from the days of Street Fighter II and its many incarnations. Street Fighter III has a sparse story element to it, though in all honesty who cares about story in a fighting game? The story itself if fairly standard, a cult has formed around some godly dude who plans on destroying the world and it’s up to whomever you chose at the character select screen to defeat him after fighting through seven (ten in Third Strike, but whatever) other fighters. Of the entire series of Street Fighter games Third Strike is by far my personal favorite. The game is aesthetically pleasing to the eye, all the animations are done beautifully and the controls are incredibly tight and well done, however did you know that there were three versions of this game? 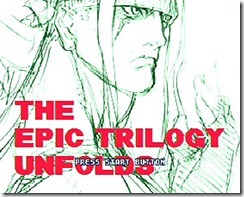 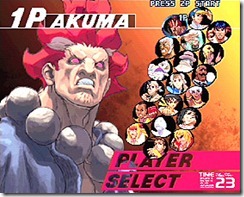 Roster-wise I won’t get in to deep as I am reviewing the entirety of the series, so I shall present to you a chart showing you the rosters for each game and I will point out the positives a negatives of them: 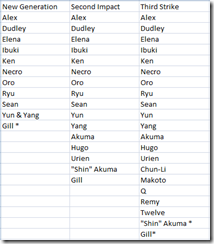 Firstly you you note little asterisks next to certain names, those signify that they are exclusive to certain ports of the game; Gill in New Generation (the original Street Fighter III) is only available on the Dreamcast port of the game, and “Shin” Akuma and Gill in Third Strike (the third version) are only available on the PS2 and Xbox Anniversary Editions. Another thing you may notice is that between the first version and second version the characters Yun & Yang go from being one character to two, this is because in the first version they each had the exact same move set and it wasn’t until the second version that they each received a unique move set which essentially made they different characters. So Roster-wise the third version is the obvious superior as it boasts a total of 21 characters, an amount unheard of at the time as not even Street Fighter Alpha had that many characters.

Now the actual fighting system for Street Fighter III went over little change over the course of it’s revamped versions but it did however reinvent the entire fighting system from the days of Alpha and Street Fighter II Tournament Edition. In Street Fighter III air blocking had been done away with and instead was replaced with Parrying, a move which allows you to negate an attack by pressing forward just before the move connects. Another things brought about by Street Fighter III was the Super Arts, they were the ultimate moves of each unique character and each one had three with which you could choose from upon selecting your character, essentially they were super combos only with more variety. You can grab in Street Fighter III which at the time was fairly inventive and no game in the series prior had it before, though the grabs are generally simple throws. I personally found regular combos easier to pull off in Street Fighter III as opposed to the previous games which in my opinion is a major plus.

Street Fighter III has mini-games, well only two of them, A Parrying mini-game where you try to parry basketballs, and crush the car which had been revived from those good old days of smashing dudes things in Street Fighter II. These mini-games however are exclusive to Second Impact and Third Strike. These Mini-games appear in between fights in Single-Player mode and upon encountering and failing or completing them you can play them at your leisure later. 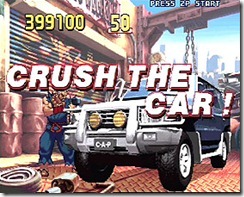 I hope Akuma has finished paying that thing off.

Ultimately Street Fighter III (Subtitle Whatever) is a great fighter, it had tight controls and depending on the version you pick up it will have an expansive roster or a small roster, all three versions are great and in my opinion the only thing truly separating them is the amount of dudes and dudettes in their character rosters. All three have fairly lackluster bonus modes (i.e. time attack, survival, mini-games) but the actual fighting is great with it’s tight controls, it’s multiplayer and single-player modes where the game shines like a star and in my opinion those are the only things that should ever count in a fighting game. This game is worth getting a hold of regardless of whatever console you get if for! 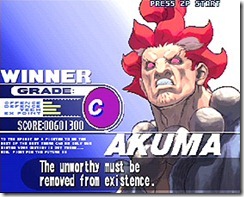 I agree with Akuma, mostly because he could destroy me with fireballs he shoots from his hands.