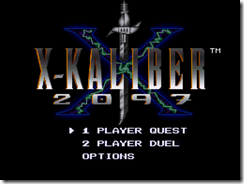 In the near future mankind will advance so far that they will begin to use the letter “X” to replace the “ex” at the beginning of any all words which start with them such as xtreme, or xkalibur. This game stars a man named Slash, as he adventure’s through the apparent anarchic future where crime runs rampant as he attempts to retrieve his stolen girlfriend. The game alternates between being a platforming game to being a fighting game as all boss battles happen in a one on one battle similar to that of Street Fighter only with four actual moves and clumsy controls. Yes I said it, this game has clumsy controls, but I’ll get to that later, for now I lets look at the games story and plot.

You are playing as Slash who is one of the few people left in the great metropolis of Neo New York who works for (what I assume to be) the local government. He is teamed up with his partner Alix and they both work to uncorrupt the city. Naturally this doesn’t work out as Raptor the current “warlord” of the city runs it with both mutants and his mob. Raptor fears these two individuals as Slash has the magical sword X-Kalibur which for some reason means that he is a threat and must be eliminated. Over the course of the game Slash battles his way through Neo New York City as he attempts to bring down Raptors regime. 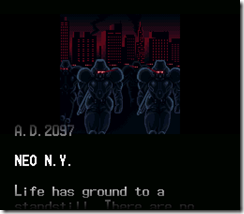 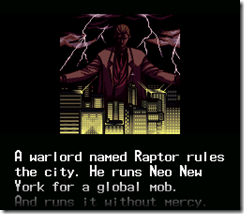 It’s still nowhere near as cool as Neo Olde Tokyo.

Now for actual gameplay, the game is a sidescrolling platformer that alternates into an arcade style fighting game for boss battles. Both modes of play control exactly the same, you have only two types of attacks a regular quick attack which in the platforming portions of each level you will mostly rely upon, the other attack is a strong attack however, there is a second delay where you are completely prone to any attack after using it (seriously, you pause for about a second or so and can’t move or anything); your other two buttons block and jump respectively (you will want to get used to blocking). The actual platforming isn’t terrible and the controls are fairly tight for it, though it’s the boss fights that are where the controls turn bad. 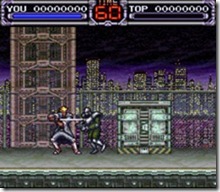 Only the best soldiers are trained to run forward into their enemies instead of using those cowardly “guns” they have.

The boss’s in the game generally have a longer reach and faster attacks. As a result, they (the bosses) are ridiculously difficult to defeat unless you are incredibly patient and lucky. I’m not exaggerating either, the boss’s do not play around in the battles they will attack when you get close, and will block whenever you attack, competence is something they definitely have. 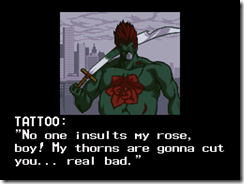 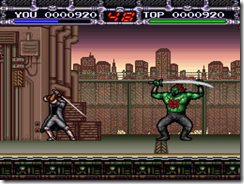 Don’t make me ellipses at you!

Now there’s an additional mode to this game, a two-player fighting mode where you are able to play as either Slash or any of the boss characters in the game, obviously the mode is not unique and the only thing of note about it is that you are able to play as the bosses that gave you trouble in the single player mode. This mode controls the same as in the single player mode where all the character have two attacks, a block, and a jump, nothing fancy; the bosses all have unique attacks which makes for interesting fights if you want to pitch Raptor against Tattoo (obviously Tattoo would win because he’s so incredibly cheap).

Now I’m not going to nit pick at this game but I will address it’s biggest and most prevalent problem which is the one on one controls, being that your strong attack leaves you vulnerable it’s impractical to regularly use it forcing you to stick to your weaker quick attack, what more the bosses do not suffer from the vulnerability as they can quickly switch to their quick attacks or block immediately after their regular attack. The controls aren’t even something you can just get used to, you have to wait until the enemy chooses to do nothing and that is when you are given an opportunity to attack.

I firmly understand that in order to prevent spamming of your strong attacks its necessary to impose some limitations, but to not apply those to the enemies which can destroy you in several hits is madness. X-Kalibur 2097 despite all this isn’t an awful game, it’s actually quite enjoyable for those seeking a challenge or who just want to play a cheesy fighting game (read: multiplayer mode). I’d recommend this to platforming aficionados who like a good challenge, though for those who are looking for a quick pick up and play game this should probably be avoided as the difficulty offsets the replay ability if you aren’t that into it. One thing I should point out about this game before I end this review is that the band Psykosonik composed the music for this game, which apparently was a pretty big deal way back when (i.e. the 1990’s). Also another thing to note is that the game sprites and animations for them are all very well done and from an aesthetic point of view this game is superb. If I were to give this game a rating with some sort of star system I would probably give it a 3/5

Fun fact the major ad campaign for this game pushed the fact that Psykosonik composed the music for the game, so much in fact that all the ads for the game pretty much gleaned over the fact that there were things other then the soundtrack that were what made up a game.

Kind of a big deal. Kind of seriously a big deal.