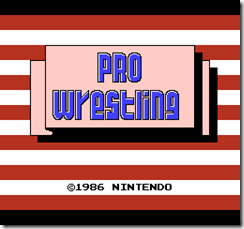 Periodically my eyes become clouded and I believe that the NES was one of the flawless systems and all it’s games were classics that needed to be played to be fully appreciated, Pro Wrestling proved that wrong. Pro Wrestling is as shallow as a game can get, you play as one of several moderately identical characters whose only true defining characteristic is a special grab. Once you have chosen who you wish to play as you wrestle opponents until you are the champion, upon becoming the champion you become a winner. The path to being a champion is a long one with over 30 matches, all of which are repeat fights against the same characters in some sort of sadistic loop.

The jokes practically write themselves.

The gameplay is simple, you have a punch and a kick, you also have a special move and grapple; the hit recognition for attacks is shoddy as you need to be spot on for any attack to work. This is significantly harder than it sounds as the perspective in which the fights happen makes it hard to perfectly line up your attacks with your opponent. 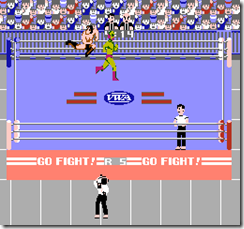 A good example of not being lined up.

The game has a very limited music list mostly repeating the same songs over and over, the graphics are subpar even for a mid-life NES game. I recall when I ordered this along with a bunch of other NES games to help flesh out my collection, I assumed it would have been somewhat of a decent game being that Nintendo had at the time of its production made quite a few decent sports games. Not surprisingly I was shocked and dismayed at this game, if it weren’t for the fact that it has multiplayer and my friends like to play really bad games I would call this game a waste of a good cartridge. If anything this games only redeeming quality is the multiplayer mode which allows you and a friend to derp around for however long you want until you get bored. The game is generally very inexpensive so buy it at your own risk, if you purchase it expecting a deep fighting game with lots of replay value then you are sorely mistaken. Buy this game only if you and/or your friends derive enjoyment from poking fun at bad games, as that is the only possible positive quality this game has, its ability to be joked about. 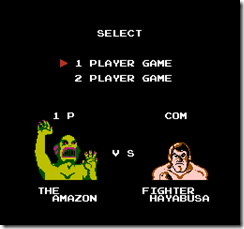 I’ll never understand why the Creature from the Black Lagoon made a cameo in this game.