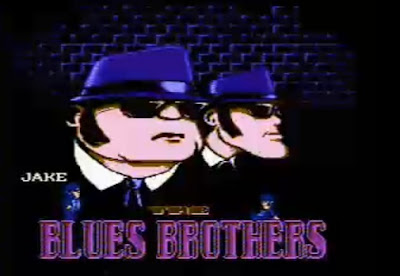 The good ol' days of Saturday Night Live are regarded with a level of nostalgia that is hard to compete with. It's not hard to find someone who pines for the old casts that included John Belushi, Dan Aykroyd, Bill Murray, Gilda Radner, Eddie Murphy and more. These are the kind of folks who believe any SNL episode after the late 80s is a total stinker and love the old episodes so much that they often forget that for every hilarious 70's and 80's sketch - there were about 6 horrifically unfunny ones. Those are still about the odds we're working with in today's incarnation: about 1 out of 10 sketches is full of belly laughs and a few chuckles can be had here and there to fill up the remaining hour and a half.
The SNL franchise was so popular that they decided to make film spin-offs of some of their most popular sketches. Low and behold, take a guess at what the batting average is for these films. There are 11 total SNL films: of which one film is known as an absolute classic (The Blues Brothers,) two are known as campy, fun, goofball comedies (Wayne's World 1 & 2,) and then... Well, at least "It's Pat" had Ween in it. That counts for something. All kidding aside, The Blues Brothers is a classic film that stands the test of time and is able to sustain an action packed, 2+ hour, chuckle-worthy film with some great music. It didn't lean on audience's appreciation for the sketches - it stood on its own two feet as a great piece of cinema. So, the Blues Brothers were a great idea for sketches, a great film idea (if you don't count Blues Brothers 2000,) so how does it translate into a video game? Titus released a Blues Brothers game for the NES in 1992; so let's see if it stands up to the reputation of the classic film. 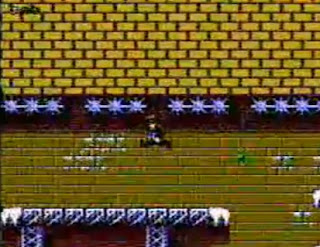 Someone call Mega Man. He's used to this spike nonsense.
One of the first things you'll notice when popping in the Blues Brothers for the NES is that the presentation is actually quite impressive. For starters the music is one of the areas where this game really shines. The tunes from the movie such as the Henry Mancini's Peter Gunn theme and Solomon Burke's "Everybody Needs Somebody To Love" come through really well and sound just like their full-band counterparts. The tunes are funky and bluesy and work perfectly for the game - this is one of the better NES soundtracks out there. The same level of praise can also be offered for the more than competent work done with the graphics. Jake and Elwood look great! They're fun, cartoony representations of Belushi and Aykroyd and the enemy sprites (particularly the police officers) are well shaded and look great! 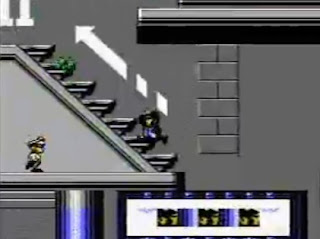 "Illinois Nazis." "I hate Illinois Nazis."
However, speaking of sprites - I have a bone to pick with the developers of this game. While there are literally hundreds of Nintendo games that have an unfortunate amount of "stock" "boring" and "generic" enemies - this Blues Brothers game is a worse offender because you can see that they tried hard to capture the magic of the movie with the way the Blues Brothers look as well as some of the level designs. The potential was there: it's just like they gave up after creating the guard dog, the police officer and the Blues Brothers. Look how many people were chasing the Blues Brothers in the movie! Look to your source material! How hard would it have been to slap a cowboy hat on the cop sprite and make it an angry redneck? Heck, the cops look exactly like Illinois Nazis anyway so you could have just palette swapped those bad boys and had your angry racist sprites. Prison guards! Angry groupies with missile launchers! Nuns with rulers! Come on, this movie had more enemies than you could shake a harmonica at - and instead we got sharks in swim goggles, non-descript spike balls, and spiders. What a cop out! 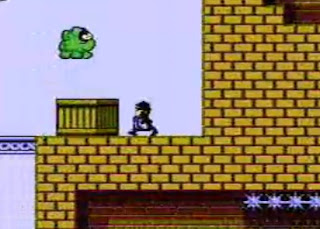 What exactly IS that thing?!
The biggest hurdle this game has in terms of being a solid game or not are the controls. Sadly, the controls could have used a bit more tweaking and this game would have been a near perfect platformer. The Blues Brothers just move too haphazardly and too fast. The scheme is near identical to the original Super Mario Bros: you can run and jump with the two corresponding NES buttons and that's about the long and short of it. There aren't really any attacks at your disposal so your best bet is to avoid touching enemies at all cost. This goal wouldn't be so difficult if it didn't feel like Jake and Elwood slide across greasy tile floors every time you try to get them to stop. Precision landing is difficult, though not impossible and jumping can land you in the right direction most of the time. However, when you miss a platform it can cost you dearly - dropping you down levels below that you really don't want to have to trudge back up again. The game is fairly generous by giving you 3 hits, 3 lives, and 2 continues - but there are still a handful of areas where you're likely to use these up. The difficulty level is average to moderately difficult; depending on how much of a struggle the controls are for you and how acquainted with platformers you are.
The level designs are decent, but they too are fairly unimaginative. The city level at the beginning is a fun slice of platforming goodness, but then we're treated to a few boring platform staples. Yes, there's an underground sewer level (which I *guess* is appropriate given the Carrie Fisher scene. However, it's still an NES cliche'.) There's levels that have icy platforms - as if controlling your character wasn't hard enough to begin with. The level designs are also like the character designs - a few great ideas that have roots in this awesome movie (first city level, jailhouse, etc.) and then the rest. You know what would have been nice - getting out of the country bar alive or having a car chase, etc. The game would have benefited by having more scenes from the film and less...well...generic gameplay. In a license that has so many classic obstacles and badguys there's no excuse to have at least two or three levels that have very little to nothing to do with the movie and to have sharks with goggles or egg-laying birds as bad guys. 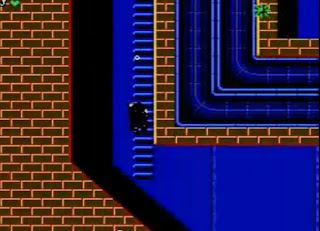 SEWER LEVEL!!!11omg!!!1
So how does the Blues Brothers game stack up? It's a fairly average platformer in the style of the Flintstones games and Super Mario Brothers and it does do a lot of things right in spite of some lackluster enemies and levels. The music and graphics are superb and compared to the Wayne's World games, this is clearly the winner in the SNL related game department. Sadly, there was no "Stuart Saves the Galaxy" or "Pat's Amazing Gender-venture" for the SNES or Genesis. That would have been something. The Blues Brothers game is relatively inexpensive and does have some fun moments to be had for hardcore platformers - I just wouldn't rank it in the top 5. As far as license games go - it falls somewhere in the middle of the pack: by far not the worst, but not the best either. If you're curious, I recommend picking it up at Lukie Games 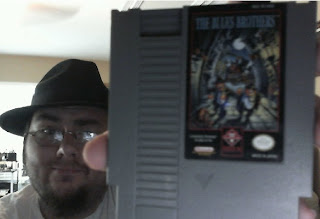