Let it be known throughout all of the internet that I was a child of the late 90’s and I watched many an awful cartoon show, one of which was Disneys “Tailspin” which is a show in which Baloo from The Jungle Book is an airplane pilot where he clearly isn’t paid enough for the trouble he routinely deals with. Some other recurring characters were Shere Khan who is a big business dude and Louie who is… the owner of a bar? This show apparently garnered enough popularity to merit several games two of which are by Capcom for the Gameboy and NES and the others are by both Sega and NEC for the Genesis, GameGear and Turbografx-16 respectively.

This is the greatest marketing decision by Disney ever.

So my first impression of this game when I picked it up at my local gamestore for a dollar was that it would most likely be an awful game due to it being based off a television show and it being on the Gameboy which was notorious for it’s massive amount of mediocre and bad games. I spied on the cart that it was developed by Capcom which honestly gave me mixed feelings as Capcom did produce Darkwing Duck, Chip and Dale Rescue Rangers, and Ducktales games that were all amazing. Upon getting home I popped the game into my Super Gameboy and started it up and much to my surprise it was a port of the NES Tailspin game. 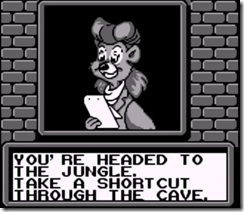 Even on the Gameboy people don’t know how to use inside voices.

Playing the game was a different story, the controls weren’t as responsive as they were on the NES but once I adjusted to them (took about 20 minutes at most) I didn’t have much of a problem. If you have not played the NES version of this game then let me explain what the point of it is:

You are Baloo the cargo pilot for “Higher for Hire” and you are being sent to deliver cargo to nondescript destinations.

Pretty simple right? Well for a game with only six levels you can bet your boots that it works just fine for the game as a premise. The game plays like a space shooter where you pilot the “Sea Duck” which can only fire one round at a time and cannot fire again until the shot either leaves the screen or connects with something (you can increase the amount of shots with upgrades later on). Shot direction is also determined by up and down movement as the plane tilts in each direction respectively when you are moving. Firing shots can be awkward at first and in my opinion is incredibly annoying but you can get used to it after a while. Aside from just shooting things you can grab up cargo crates which according to the intro are remnants of other cargo planes which have been shot down, also you can flip the plane upside down and head backwards same rules apply with all movement and shooting. 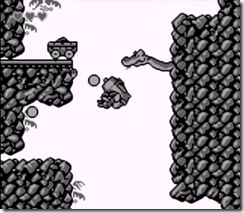 Something unique to the game is the addition of bonus stages hidden in each level where you switch from playing as Baloo to playing as Kit Cloudkicker his spunky sidekick where you pop balloons while surfing on clouds. The balloons give out a decent amount of points and generally can give you the push you need for an extra life. 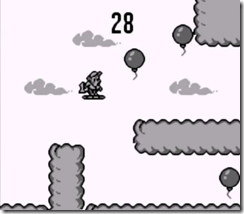 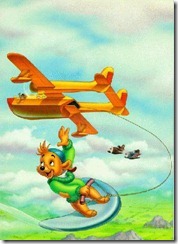 At the end of each stage is a boss fight, the boss fights weren’t exactly challenging but were interesting. The designs for each boss are neat and if the battles didn’t shoot by so quickly I would have liked to have seen them do more then their two or three standard attacks. Once you’ve beaten the boss you get a brief reprieve where you can buy power-ups for the plane with the money you earned by collecting cargo strewn throughout the level, this I didn’t know my first time through as I avoided many pieces of cargo and lost some easy money. 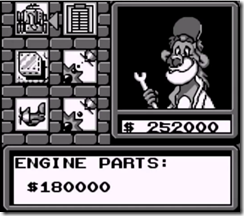 I swear this had best be the best engine I’ve ever invested my blood money in.

In my opinion this game is worth a look if you can’t get ahold of the NES version the animations are not nearly as nice as they are on the NES, the only reason I would recommend this game is if you want a portable version of the game or if you want to give the bonus stages a try. Tailspin for the Gameboy isn’t spectacular but for the price I paid I’d say it was more then worth it, if you can get this game for a couple of bucks I’d recommend you get it. 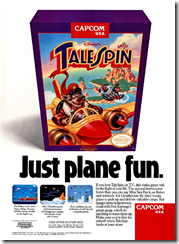