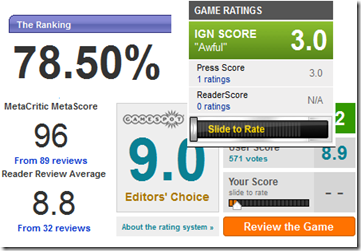 So it has come to my attention that in the gaming community there are many who seem to have forgotten or do not quite grasp the rating system reviewers use when critiquing games. I believe this may have been caused by the sheer overabundance of games being released for platforms as of late combined with the equally large number of people "reviewing" the games. Due to the fact that money has become tighter and games have become a greater investment then a decade ago people look towards critics and reviewers to tell them which game their hard earned money is best spent upon. The problem with this is that due to the sheer overabundance of critics (many of which hold heavy bias's due to external factors) many people tend to go for those that are most popular (i.e IGN, Gamespot, Gamefaqs), the problem with this is that critics are as human as the average consumer and not all will examine the same features of a game. This brings me to my original point that people have become complacent to hear the opinions of a singular source on all things even if the aforementioned person giving the opinion knows nothing about the game or system in question. My solution to this conundrum is to help you dear reader better understand how the game grading system works and to help you seek out second and third opinions on games from sources knowledgeable on the topic.
The Grading System

The numerical rating system is the most common often using either a scale of “1” to “5” or “1” to “10”  with “5” or “10” being excellent and “1” being bad. It is rare for games to achieve the coveted “10” as it implies a game is without flaw and has features that are well worth investing your hard earned money, and a rating of “1” states that a game is so flawed and so disinteresting that the game has no value for anyone outside of a collector trying to get his/hers hand’s on all of the games. It’s fairly easy to understand those two extremes, but what about all the ranges of numbers in between those two? Well anything between 2-4 or just “2” in the 1-5 rating system is the mediocre range it can be assumed that any game that falls within the that range has features or flaws that make the game(s)  undesirable but it can still be played to an extent, likewise anything in the other extreme range of “6”-“8” are games that are above average and and contain some features that make it stand out as a unique experience. 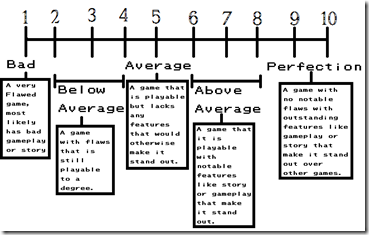 Can be clicked to enlarge.
The above chart may be of a great help as I have noticed that many contemporary like to attach their own adjective’s to games like a “Painful” next to a 2 or “Good” next to a 6. It’s not to say that they are not appropriate terms however they are very subjective. When push comes to shove it is best to think of games in the ranges I provided above as there is usually a huge difference in quality between a game with a “2” and a game with a “1”, just like a game with a “8” vs. a game with a “9” or “10”.
Getting Opinions on Games
Say you want to get ahold of a copy of “Fantasy Game 7” but you aren’t sure if it’s worth it. It goes without saying that the most likely course of action is to perform a Google search for “Fantasy Game 7 Reviews”, naturally the main review sites will popup.

or not…
The problem with just accepting the opinions of these sites is that the people who write them are as human as myself and you dear reader. Many reviewers on these sites have heavy bias' against and for certain games, here’s an excerpt from an IGN review of Dynasty Warriors 7,


“Most gamers will cringe when they learn that Dynasty Warriors 7 is essentially the same game as previous titles in the series. It leans on the same old gameplay that began with Dynasty Warriors 2 on the PlayStation 2 more than ten years ago, and that's not a good thing. It's not that utilizing the same gaming conventions is bad in and of itself. Rather, it's that Dynasty Warriors' gameplay has never been exceptionally well-executed or solid, so why throw it back at gamers time and time again? “ (Source)

The review is ended by stating that the game series has always appealed to a “Niche” audience. The statement is only half true as the Warriors games are insanely popular in the eastern hemisphere unlike over here in the States. The ultimate problem with the review is that he spends it explaining how the game lacks any new features to make it stand out from the other games, this statement would have more validity if not for this great discrepancy.


“I predict I spent roughly 8 to 10 hours with Dynasty Warriors 7, spread over three different days of playing.”(source)

The reviewer spent very little time actually exploring the game. This is not to say that this particular reviewer is bad, just that this particular review he wrote for the game has little validity due to the fact that he never finished the game and just tossed his opinion out and called it a day.
For many games that appeal to “Niche” audiences it is best to look for one of two things:

There are a plethora of wiki’s and websites floating around that actually explore the entirety of a game, are you looking for a review of Earthbound or the other Mother games? Earthbound Central has you covered. Are you a fan of the Persona games or perhaps the other Megami Tensei games? There’s a wiki for that. Maybe you wanted to find something out about the newest Animal Crossing game, BAM there's a site for that.
I am not stating you should look for a specialist for every game because when push comes to shove there may not always be one for certain games of series, what I am saying is that you should at the least look for second and third opinions on games. Following up on my earlier example of Dynasty Warriors 7 a Gamefaqs reviewer lauds this game as being a great fresh addition to the series bringing back good mechanics and adding new ones. The discrepancy between these two reviews is obvious, one claims the game is old hat while the other states that the game is a great new addition to the long running series. The biggest difference between the two is that the Gamefaqs review explored the multiple aspects of the game and the IGN review only game an overview of it. If one were to have just used the IGN review to determine whether or not to buy the game they may have missed out on a potentially great game. 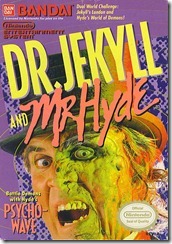 Sometimes you aren’t missing out on much.
The best reviews to look for are ones that examine as many aspects of it in as much detail as possible, if you are short on reading time however another fine option is a brief review that explains the games pros and cons. Naturally this means that you should check out every review posted by me because I am totally a specialist in every field and know all of the things forever.
Posted by Unknown at 7:49 PM