Oh was my post late this week? Well normally this would be the result of communists attempting to destroy the gaming industry, but unfortunately it was something far worse. Ponies. Ponies invaded my computer.

They’re plotting something, I can just feel it.
The levels of cute were so overwhelming I had to take a break and do some manly stuff like wrestling Bears and extreme beard growing. 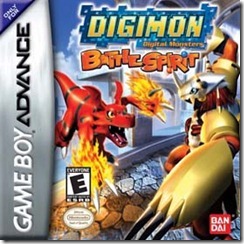 Way back in the far off years of 1998-1999 two shows popped up that essentially defined a majority of nerdy children in the United States, these shows were Pokémon and Digimon despite a great deal of differences between both shows many children (some even today) claimed that Digimon was a copy of Pokémon. In all actuality the Digimon series has much deeper established roots then the Pokémon series. Akiyoshi Hongo is credited as the creator of virtual pets most notably the Tamgotchi line and as the man who created Digimon. Digimon itself started as a line of virtual pets these virtual pets were created in 1997 as a series aimed at young boys. Whereas Pokémon was a result of Satoshi Tajiri’s fondness for catching small bugs and tadpoles Digimon is a result of the virtual pet craze. So children formed their respective camps and many to this day prefer one group over the other, or in some cases like a third group that popped up in the midst of this craze. However today we are not closely analyzing the the intricacies of sisters and whether or not they are similar or dissimilar, we are looking at Digimon Battle Spirit a fighting game for the Gameboy Advance. 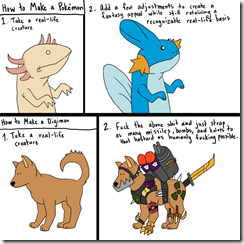 Seems legit.
I didn’t particularly notice a story to this game, to my knowledge the extent of the story is:

The game handles this in the best possible way, you fight everything. There are seven stages in which you have to defeat a target Digimon while avoiding or defeating some random spawning enemies who will drop random items which you can throw at your opponent. The stages are generally large and as you move around the camera scrolls with you so that you cannot see the entire stage at any point in time, some may find this annoying as it limits visibility and makes it harder to catch a computer who is on the run. 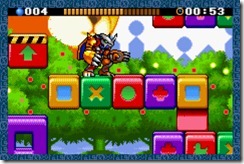 They better run before I Nova Flame all up in here.
In battle you aren’t trying to defeat your opponent in the rudimentary way of hitting them until they are out of HP, you are instead hitting them and trying to collect more orbs then them, at the end of the battle your orbs are counted up and whoever snagged the most wins. The fighting mechanics in Digimon Battle Spirits I almost overly simplistic with the A and B buttons controlling jumping and attacking with the triggers allowing you to vary your attacks by holding them in. There are five starting Digimon to choose from with several you can unlock later on by beating the game. Each Digimon has a unique move set and certain attributes that set them apart from the other Digimon. A good example of this is that Guilmon has weak physical attacks but moves quickly, this makes him a good comparison for Wormmon who attacks quickly but moves very slow. A random element to each stage is the appearance of the Digimon Calumon who can instantly digivolve your character to mega level for a brief period of time greatly increasing your strength and making you invincible. 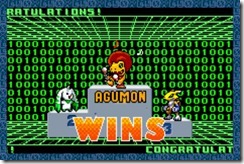 Let’s be honest the Afro already hooked you on the game right? Just forget the rest of the review and go buy it already.
Digimon Battle Spirits should mostly appeal to fighting game enthusiasts looking for something different to try and even to regular fans of the Series as the game is simple enough to grasp and fairly easy enough to play that anyone can really do it. For those very reason I mentioned the game lacks much for the person looking for an intense deep fighting game like Soul Calibur or Super Street Fighter IX Hyper Turbo Limited Arcade Edition VII. The game can feel shallow at times as battles sometimes boil down to hit and run tactics and the final battle itself can for the unprepared be overwhelming. The game has some neat unlockable characters but aside from those few all they bring to the table is some new moves. The game is fairly inexpensive at most places and can provide a fun ride for a couple of playthrough and is more then worth a couple of bucks. 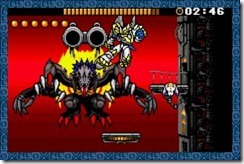 If I’ve learned anything from the Power Rangers jump kicks are the most efficient way of dispatching enemies.
Posted by Unknown at 5:03 PM