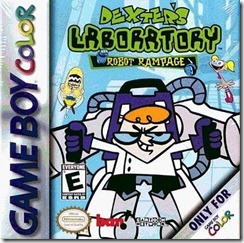 If your reading this there is a high chance you have probably heard of the show Dexter’s Laboratory it ran four seasons from 1995 to late 2003 before being moved to Boomerang where it can still be viewed today (among other shows). Dexter’s Lab Robot Rampage is far from an original game, despite featuring many characters from the show itself it in actuality is the North American localized version Elevator Action EX. Depending on your age you may remember a game called Elevator Action as it was originally an arcade game made in 1983. Both Elevator Action EX and Robot Rampage play exactly alike, barring sprite differences the games are practically identical. Does this mean that Robot Rampage, and by osmosis Elevator Action, are bad games? Well I’ll tell you. 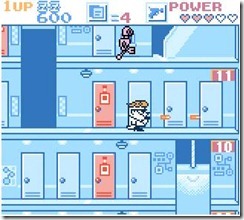 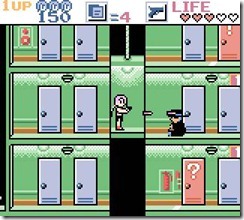 That friends is how you make an original game.
The point of the game is to complete four stages each with four parts in the form of four buildings with differing interiors. You complete each stage by collecting all of the documents which are hidden behind special doors which you can open. Once all the documents have been acquired your objective is to either climb to the top of the building or to head to the bottom where you will be taken to the next stage. As the games name implies you will be assaulted by robots who will follow you and try to kill you by either coming into contact with you or shooting you, you can destroy them by using your weapon on them. You start with a regular pistol but can acquire  several other weapons ranging from a machine gun to bombs which can make dealing with the plethora of constantly respawning robots much easier. Oh did I forget to mention that they constantly respawn? Well they do, so if you want to farm extra lives it’s pretty easy to do. 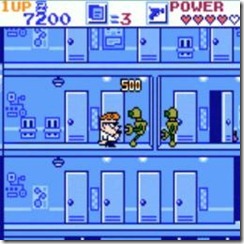 I’m serious.
The graphics for the game are fairly impressive for a Gameboy Color game, but that may be due to the limited amount of stuff you can actually interact with allowing for that kind of space. The soundtrack for the game isn’t all that memorable but isn’t grating enough that it makes you want to claw out your ears. The sheer simplicity of these games may be why they have been received so well over the years, you climb take some elevators up, shoot some robots, grab some documents, and get out. No matter where you look this game is very inexpensive but due to the overall simplicity of the game it’s so easy to jump in and out of it that it’s hard not to want to come back to it every once in a while. The only possible downside I could think of is that the game can be beaten in a around an hour or so, maybe less if you are really good. If you want a cheap quick game that can give you a grand old time I’d highly recommend Dexter’s Robot Rampage, and if you have access to a European Gameboy I’d also recommend Elevator Action EX. 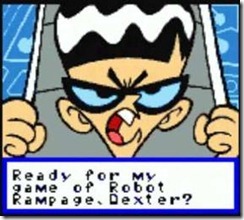 Only if there will be a ridiculous amount of elevators.
Why is there an apartment full of Robots anyway?
Posted by Unknown at 8:41 PM