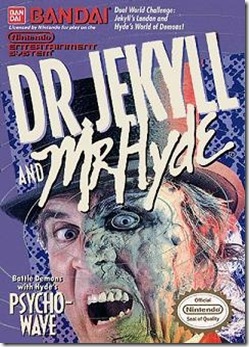 So this weekend past I was derping it up with a friend of mine at a flea market, and it was there that I spotted a NES title that intrigued me. This game was Dr.Jekyll and Mr.Hyde. I thought “surely a game based off of the wonderful novel would be good.” God was I wrong. This game is amazingly awful, and wonderfully terrible. It suffers from poor controls lack of driving story, EXTREME DIFFICULTY and a disappointing ending. Though at this point you probably don’t believe me, so let me tell you about this game at length.

I couldn’t find any historical info to impart to you guys, sorry :(

Dr.Jekyll and Mr.Hyde is awful, I’d say its on par with Tommy Wisaues “The Room” for absolute awfulosity. There is no story to this game, however there is a small infinitesimal plot that you can only figure out by playing to the end; It is that Jekyll is strolling to the chapel to get married. That however doesn’t explain why every creature in the universe wishes to murder him. 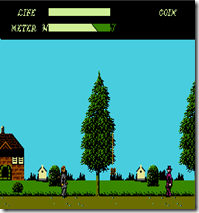 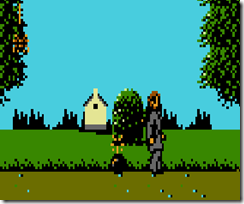 See that guy in purple? He drops a bomb as he walks by.

Literally everything in the game is trying to kill you, children, spiders, old men, gentlemen, aliens, goblins, lightning, etc Jekyll can’t catch a break at all in this game. What makes matters worse is the fact that the game has you constantly auto-scrolling which means you have to time your sluggish jumps as they are your only possible way of avoiding being hit. You are provided with a cane to jab things with but it has no effect ON ANYTHING. The cane attack serves no real purpose and as Jekyll all you can do is try to not die. But when your meter fills up. . . 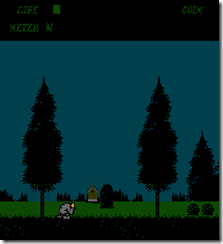 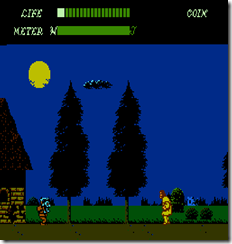 Its payback time as Hyde!

You transform into Mr.Hyde and you start to auto-scroll in the opposite direction you were heading, at night surprisingly enough. You also have the ability to fight somewhat as you can punch and once in a while shoot some fireballs. Though as exciting as this may sound there is a catch, once Hyde reaches the place Jekyll was when he transformed lightning kills you. Yep, lightning, and the only to avoid it is the punch goblins and aliens until your rage meter is depleted. 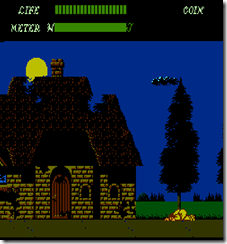 Just because you’re Hyde doesn’t mean you are invincible, he’s just as flimsy as Jekyll.

I’d honestly say I’ve seen the game over screen around 50 or so times before I gave up.

This image will be forever ingrained in my mind.

I will give the game some props for having really good music, though that by no means makes it any less terrible. This is a game is not for most people, it presents a level of challenge rivaling that of Ninja Gaiden and Battletoads. If you are really eager for a challenge this is the game for you, otherwise keep your distance as this game doesn’t kid around. If you know what’s good for you though you’d avoid this game.