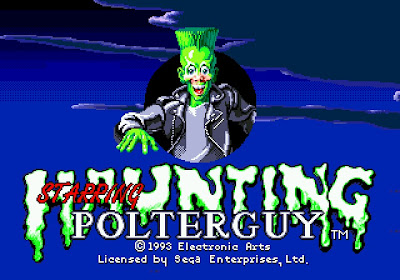 What is WITH that goofy expression?


There's a point in nearly every child's life where they have a firm idea of what they would like to be when they grow up. It's somewhere between age 5 and age 8 where the child has a good long stretch of time devoted to being a fireman, conductor, policeman etc. Sure, Billy wanted to be a superhero at 4, a boat captain by 5, but by 6; he's going to be an astronaut and there's not a darn thing anyone can do about it. Like a few of you, I'm sure; I wanted to be a game designer. I wanted to work on the next Mega Man or scheme up the next platforming masterpiece. Of course by the time I hit middle-school I realized that my Achilles heel is math and since I count on my fingers - that ambition goes right out the window.

As an adult I realize that there is an even bigger hurdle than having absolutely no mathematical skills. As a game designer, you have to be able to sift through insane ideas that work and insane ideas that wont. We've all played countless games that sounded great on paper, but were a confusing, horrific mess in practice. On the other hand, there's games like Sonic the Hedgehog, Toejam and Earl, Earthworm Jim, and more that had no business being good; but by some crazy fluke are absolute classics, worthy of the highest level of praise. Finally, there's the rare class of games that Electronic Arts' "Haunting: Starring Polterguy" falls into - it sounds like a great idea, it IS a great idea, and by that very nature - will fade into obscurity in spite of being a solid, wonderful game.

Haunting has one of the greatest and most straightforward plots in gaming; you control a poltergeist and scare the ever-loving pee out of an obnoxious family. The game was released in 1993 - about 5 or so years after the film Beetlejuice, which was still popular in the early 90's due to an animated series, Action figure line, and its ubiquity on basic cable, USA and HBO. So ghostly creatures scaring off a family by doing bizarre, silly, funny, or grotesque pranks seemed like a great idea on paper. 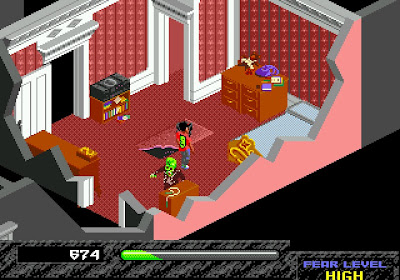 A great concept is only the first hurdle in making a solid game. The real question is "how does it play?"

I'm happy to report that the gameplay in Haunting is addictive and that the gameplay mechanics are just as inventive as the plot. You control Polterguy through a house laid out in an aerial isometric perspective. In each room there are various objects that emit a sparkling glow when Polterguy gets near them. These items are your traps and can be possessed in order to perform various scares. When a member of the Sardini family is in the same room as you, the idea is to possess as many different objects as possible to raise their fright level. Some of these traps go off automatically, some are controlled by you, and still others are set off by the Sardinis themselves once they are set. There's fire shooting candelabras, spiders, rugs that bleed, skeletons, corpses, visions of death, and more. You also have a few special scares at your disposal such as the "Super Scare" and "Boo-doo" and more. Seeing how many different scares you can pull off in one room before the family member leaves is half of the fun. 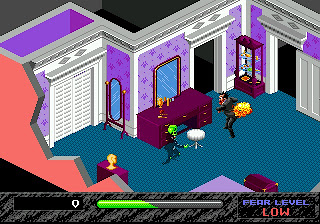 Once you have successfully chased a member of the Sardini family out of the room, you have to collect the green ecto pools left behind before a floating ecto monster will come and suck them up. If you encounter one of these ecto monsters, you can try to fend them off with your kick (which is next to useless) or run to another room and try to scare another family member before your ecto bar runs down. Ecto acts as a timer of sorts - if you run out of ecto before completing the level, you are forced to fight your way through the underground level for more ecto. Each level is completed once all of the Sardinis flee the house from one of the rooms that leads outside. After each level is complete, you are sent to the underground stage in order to earn back any ecto that you expended during the house level. 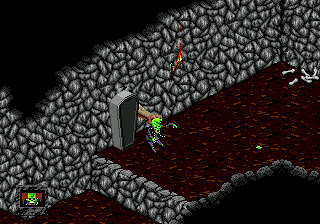 You will grow to hate the Underground Stages...

There's a handful of dangers that you'll run into in Haunting. Not surprisingly, the Sardini family members cannot see you, so coming into close contact with them is not in the least bit dangerous. However, the dog can not only can see you but is quite a nuisance. The dog alerts ecto monsters, barks to drain your ecto and also calms the fright level of the Sardini family. If a family member is in the room with the dog, your best bet is to steer clear and go after another member until the person has left the room and is fair game. As stated before, the ecto monsters are a pain because they attack to drain your ecto and also suck up any earned ecto once you've chased a family member out of the room. Treat these like the dog and run to the nearest room quickly. Your biggest enemy in this game is time because once your ecto meter runs out you are stuck battling through the underground stage. Dangers such as hands that pop out of walls, bats, and more can drain your life. If you die in the underground stage, that's it. Polterguy is toast.

The presentation of Haunting is decent but neither the graphics nor the sound are the highlight of the game. The gloopy, drippy, screechy sound effects in Haunting are effective - but I've heard better from other games around the same time. The spooky music is a good fit for the game but can be grating at times. I know that games of this era weren't known for their dolby digital surround masterpiece soundtracks, but the sound effects sound tinny and distorted. The graphics are functional and at times colorful and humorous. While nothing to write home about, I would rate the graphics higher than the sound and would say that as far as what the Sega Genesis was offering at the time, the graphics are better than average. I just wish the main character didn't look so darn goofy. 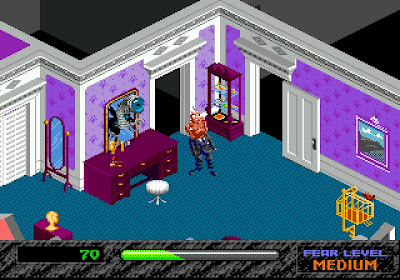 Scared the pants off 'im!

The controls work great - barring only a few minor hiccups here and there. The perspective sometimes hinders your progress as you think you're passing through a doorway but are just rubbing up against the wall. Sometimes your character feels like he's sliding around a little after you're done pressing the direction button, which is perfectly fine in the house stages but frustrating in the underground ones. However, throughout most of the game the controls do exactly what they should do.

I would say that the challenge level for Haunting is between beginner and intermediate difficulty. Sometimes it feels as if nothing is going your way; the dog shows up for every scare, the Sardinis run from the room after only 2 or so traps and you can't seem to get the final member of the family outta the house no matter how many traps you set. Times like that, you'll find yourself in the underground dungeon stage a lot and it will drain your health faster than you'd imagine. I suppose the main strategy for the dungeon is just to keep a slow but steady pace and try not to miss any of the ecto blobs on your journey or else you'll have a tough time trekking all the way back to the beginning of the stage just to get grabbed by a rogue arm when you weren't paying attention. Other times, the game feels like it almost plays itself for you. The family members flee the house after only a room or two, the dog is nowhere to be found, and you slid right out of the room before the ecto monsters arrived. The difficulty curve sometimes feels like luck-of-the-draw, some of it is in setting off the right traps at the right time, and some of it lies in checking your map frequently and building a solid strategy to get those people outta the house in as few steps as possible. 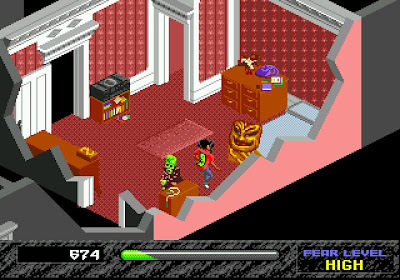 So the ultimate question is, "Why didn't this game go over better?" After all, if you were to do a poll of your closest friends and ask them how many had Haunting, I'm sure most would look at you with that confused puppy dog look. The graphics are decent, the concept is awesome, and the gameplay is solid. I suspect the release of the Sega CD complicated things and hindered the sale of Genesis games such as this. Whatever the case may be, this is an original, worthwhile game that I highly recommend. It's quirky, it's fun, and it'll impress your friends when you tell them you have a game where a ghost with a mohawk scares the piddle out of a well-to-do family. Give this one a try! 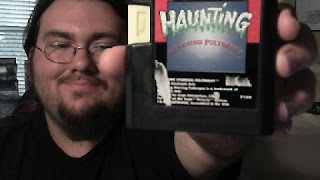