Legend of the Mystical Ninja (SNES) 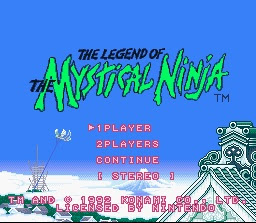 I'm sure this statement won't be entirely controversial, but I hesitate just a little when I say that us gamers are a really strange bunch. I know this from personal experience, so please put down your pitchforks and torches and save them for the Sega CD version of "Mary Shelley's Frankenstein." All I'm saying is, I'm sure I'm not alone when I say that most of my biggest life events have revolved around video games. I can't remember the name of the first girl I ever kissed. I think it was Alicia. Or was it Amy? Anne? Definitely an "A" name. I barely remember my first dance (though it's easier to remember because she was drunk and the song that was playing was one that I hate. "With Arms Wide Open." Bleecccch.) However, I can remember clear as day the first time I ever played "Legend of the Mystical Ninja" at my buddy James' house. I suspect many of you have similar stories for Megaman 2, Super Mario Bros. 3, Double Dragon or any other _____insert game here_______.
As wonderful as those games are, they didn't have quite the impact that Konami's 1991 classic did for me. I stopped by James' house after school every day to try out the latest game he rented from the local grocery store or bought at the Toys 'R Us. On one particularly memorable day, he said "I have this Japanese game we HAVE TO play." He and another buddy of ours almost beat it in one night - it was my challenge to help him finish. While we never got to the final stage that day, I will always remember the fun we had popping enemies in the head with flutes and yo-yos and playing mini-games in the arcade.
Full disclosure: this is one of my favorite games, so don't be surprised if there are even more flowery, glowing words about this title than many of the previous ones I've reviewed. Don't say I didn't warn you. 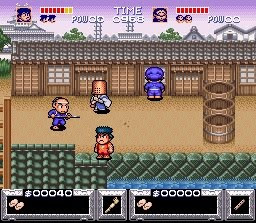 I've seen this screen once or twice...
First, a little history. Legend of the Mystical Ninja is the American title for the Japanese Super Famicom game, "Ganbare Goemon: Yukihime Kyuushutsu Emaki." Don't ask me to pronounce that - I clearly copy-pasted that badboy in here from Wikipedia. The Goemon series of games started with the arcade classic Mr. Goemon, which I also recommend - although the gameplay is almost completely different. The only version I know of here in the states is available from the ill-fated Game Room application on XBLA. I highly recommend at least giving the free demo a spin.
To give a little more history (this time, the kind that comes from textbooks - not Nintendo Power,) the character Goemon is based on a Japanese folk hero named Ishikawa Goemon. From what history there is out there floating around, Goemon is the Japanese equivalent to our Jesse James - an outlaw, a thief, a bandit who has been given a larger than life persona that may or may not have been earned. Some legends say he was a ninja out for revenge, some say he was a robin-hoodesque figure who stole from the rich and gave to the poor - and according to Konami, he's a squatty little blue haired boy who whacks bald Japanese fishmongers with a pipe for coins and hangs around a chubby mustachioed man who loves eating and may or may not fancy the male geisha rowing the boat after your giant squid battle. I love Japanese gaming. 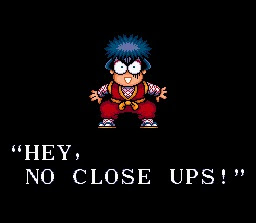 Breaking the fourth wall? GENIUS!
Side note: In the Japanese version of this game series, your main characters are Goemon and Ebisumaru. In the cart I'm reviewing, the characters are known as Kid Ying and Dr. Yang. This is one big ball of confusing if you wind up playing the US N64 games, as they are correctly named in those games. The scourge of "localization" also lead Konami to snip a funny sequence or two from the US release. That being said, there's a lot of humor left in the US release and I wouldn't say it is necessary to track down the Super Famicom cart just for a few tiny differences.
The controls in Mystical Ninja are easy to grasp and work pretty close to flawlessly. You control Kid Ying or Dr. Yang in this action adventure classic - running, jumping, swinging around yo-yos and flutes across levels broken up into several screens and usually an "action stage" section guarded by a giant raccoon dog (?) who gives hints or cautions you about danger ahead. I know there is also some Asian folk history behind these giant raccoon dogs (whose statues in Asian markets usually have another special feature I probably shouldn't mention in this review. Suffice to say - color me impressed) I'm just clueless as to what it signifies. 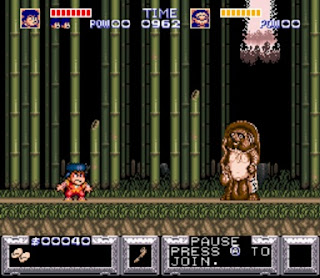 In order to pass this stage, "Raccoon Dog" says you need really big...er...sandals
Anyway, you can buy pizza to replenish health after your last hitpoint and sandals to increase your overall speed and jumping power. These sandals are a must! Hidden around most levels are bonus stages where you will need these sandals to access various prizes blocked by rock-piles. The hit detection is mostly accurate (although you'll be cursing all of the enemies and their cheap-shot flying projectiles - swearing up and down that they didn't really hit you,) but overall there aren't many hiccups in how you control Ying or Yang around the stages.
As I mentioned before, there are a bunch of hidden or bonus sections to this game that are well worth the price of admission alone. There are sections where you jump across rocks for bonus items, there are first-person dungeon maze sections ala the first couple Might and Magic games, and there are bonus games all over the place! It's hard to accurately explain in words the fun of the carnival stage. There is horse-race betting, dice, slot machines, whack-a-mole, paint race, and arcade games such as breakout and hockey. There are fortune tellers who influence your immediate future by rewarding you with goodies when you leave the store or showering you with enemies. Keep in mind that all of the fun little in-game distractions cost gold coins, so you could spend your entire wad on parlour games when you really should have picked up pizza and sandals. Just a friendly, frugal warning from someone who has spent HOURS playing the in-game minigames. It was a novel idea back in the early 90s and it still holds up remarkably well today.
The graphics and sound are both out of this world and add so much to an already amazing game. There are plenty of short cutscenes and animations in between stages that are equal parts detailed and impressive as they are laugh-out-loud funny. While this game is no Donkey Kong Country, I still would rank the elaborate cutscenes and animations as highly impressive for the Super Nintendo. The characters are just so darn cute! As stunning as the graphics are - the music is also one of the big highlights of this game. The songs are just so infectious! If you're anything like me, you'll be humming the various stage songs right along with the Megaman 3 intro and Super Mario World theme. I have heard some of these songs before outside of the game, so I believe that a few of them are old Asian folk songs - either that or someone saw fit to do restaurant muzack versions of Mystical Ninja songs. I'm betting on the former, since there are so many references to Japanese folklore and culture in this game. 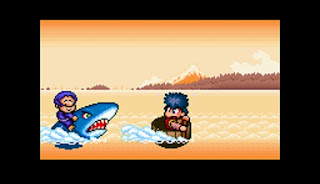 Jaws 4-D: Attack of Dr. Yang!
For me, the absolute highlight of the game is the multiplayer element. I know, there are tons of SNES games that feature 2 player co-op. However, this game feels like it was MEANT to be played with a partner. I mean, you're watching/playing the adventures of Kid Ying and Dr. Yang, right?! The cutesy and clever cutscenes pull you in and it only seems natural to have both Goemon and Ebisumaru on screen when all the action is going down. Not to mention that the difficult level increases as the game progresses, so there are times where I struggle unless I've got a buddy backing me up and tossing coins or throwing stars at our opponents. If you're looking for a great multiplayer game (ya know, back when multiplayer required you to be in the same room as your partner) then look no further than Legend of the Mystical Ninja. 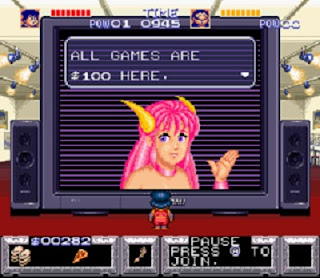 Not at Lukie Games! Currently only 20.97 as of this blog. Such a steal!
So what else can I say? This game and the other US ported Goemon games didn't set records with sales over here and that's a shame. I believe it's one of the top 5 essential SNES games and is every bit as good as the staples like Super Mario World, Mario Kart, Donkey Kong Country, Chrono Trigger, Legend of Zelda, Super Street Fighter II, etc. - it's just a very different game. One that I know you will enjoy if you dig a fun, comical action adventure game and especially if you can grab a friend, family member, hobo, stranger, neighbor, police officer, or teacher to play second fiddle to your little blue haired hero. Lukie games has a copy for sale NOW and you'll be glad you picked it up. It's one of the essential SNES games. Period. 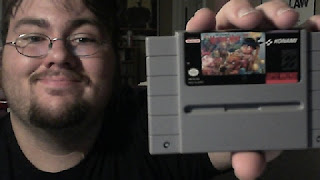