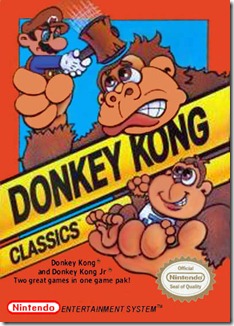 I’m certain PETA was all over Mario after this.

Everyone who grew up in the 80’s or 90’s knows Donkey Kong it was at the time one of the major plat-forming arcade games. Donkey Kong was so immensely popular it spawned ports onto nearly every game system and received great sales all around. This merited a sequel and from that Donkey Kong Jr. was born. Donkey Kong Junior was the sequel to the first Donkey Kong game where you play as DK Jr. who has to rescue his father after he was captured by Mario in the first game. Just like Donkey Kong, Junior proved to be just as popular porting over to every 8-bit system of the time. After a rather successful run at that Donkey Kong Classics was released, this game featured both of the popular games on one cartridge and sold considerably well. 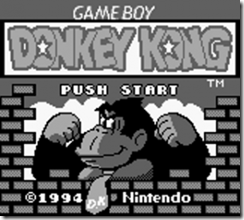 Unfortunately some doesn’t mean all. :(

The Donkey Kong series of games are one of the earliest examples of a game which produced a story through onscreen action. For instance when the game starts you are treated to a scene of Donkey Kong grabbing Pauline and climbing up some steel girders with her. Over the course of the game you climb up a section of Girders trying to get to Pauline, but once you reach the top DK grabs her and scampers off. Eventually you reach the top of the Tower and DK is knocked down onto the ground and Jumpman and Pauline share a moment.

The Sequel to Donkey Kong picks up where it left off with you playing as DK’s son as he tries to rescue his father who has been captured by Jumpman. DK Jr. fights through several stages avoiding the many animals Jumpman releases to stop him. At the end DK. Jr. frees his father and as Jumpman falls from the top of the platform DK’s cage was on. 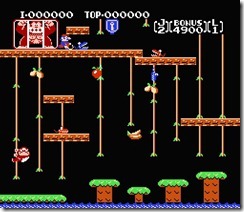 And boy is he excited!

The games featured simplistic control featuring nothing but movement and the ability to jump. Though this is more then adequate for the simple plat-forming the game(s) offer(s). In Donkey Kong you climb ladders and Jump over barrels in order to reach Pauline, while in Donkey Kong Jr. you Climb Vines, avoid animals, and grab keys to free Donkey Kong. Both games feature three levels and you win the game after completion of the third level, though afterwards the game loops back through the three levels infinitely but with increased difficulty each time. 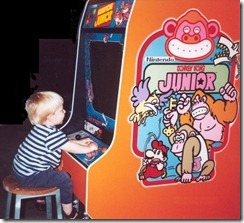 No matter how long he plays, it will never end.

The both games have relatively catchy tunes and the graphics for both are very appealing in the NES ports, though a majority of the ports onto lesser systems are shoddy in quality and should be avoided by anyone but a collector. Along with the many ports Donkey Kong had a significant amount of clones based off it, many of which didn’t really bother to even change the sprites. 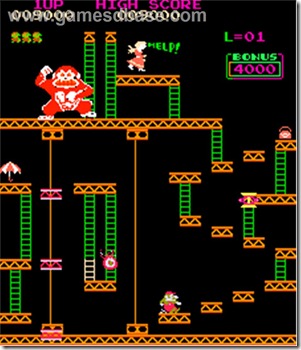 Donkey Kong Classics is a game that, in my opinion, should be in everyone’s collection. Its good simple fun, and with the addition of a multiplayer mode allows for competition amongst friends or family to see who can get the highest score, or who can beat the game the fastest. I’d advise against getting the lesser versions of the Donkey Kong games on the Atari and Colecovision, the NES is the obvious superior system. Long story short; This is a great multigame cartridge and you should buy it.

If you can, don’t subject yourself to whatever this is supposed to be,

Donkey Kong originally did not star Mario, but instead starred a man simply known as Jumpman. It was upon the port to the home consoles and the incredible popularity of the Mario Bros. games that Jumpman was changed to Mario. Ironically Jumpmans character design was already close enough to Mario’s so all Nintendo really had to do was change some artwork and manuals. 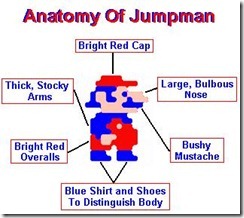 Bulbous? I’m sure he prefers profound.

The original Donkey Kong arcade machines were converted from old Radarman cabinets, these cabinets had a distinct red color to them. (Radarman was Nintendo’s first try at getting American's to like video games after the great game crash.)

Jumpman would later become Mario in the game “Mario Bros.” an arcade game which featured two plumbers attempting to fight off turtles in a sewer while being beset by flames and other hazards.