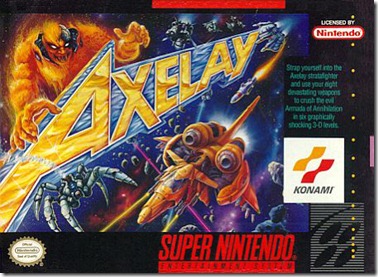 They forgot to add “Hardest shooter in the universe” as the subtitle.

Axelay is just one of Konami’s plethora of shooters, though not as notable as Gradius was Axelay still held up fairly well during the SNES’s lifetime. One of the most inventive aspects of the game was its head on perspective as you play the game perpetually moving forward as if driving a race car. At certain points though the game reverts to a side scrolling view, but for the most part it is done using the head on view. 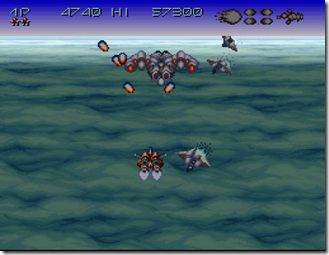 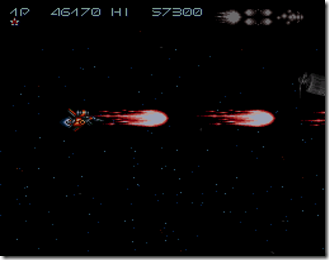 As you move forward the scenery below your ship constantly moves this was a fairly unique type of graphic as during this games time the Super Nintendo was the only system with the capacity to do this. The Super Nintendo has eight modes of graphical ability each of which correlates to a certain kind of background movement and overlay. Mode 7 was a mode that took an image and gave it a horizon effect making it so that it looked like you were traveling quickly through the air. This mode was underused up until Axelay came about, once the game was released several other games popped up using this same type of mode. (Lawnmower man anyone?)

Now the overall purpose behind Axelay is that the earth is being invaded and you are a pilot (the last pilot alive actually) who is trying to stop the Aliens. The plot gets no deeper then that. To its credit it is a space shooter, a genre which commonly has no story whatsoever. 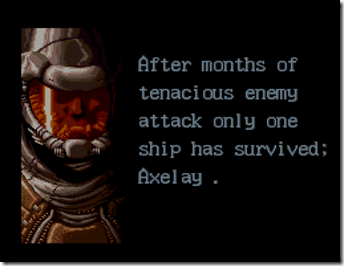 So I guess he won’t be getting a pension?

Sure the story may not exist but the gameplay is where it really seems to shine. Unlike most shooters where your weapon upgrades and changes based on items you pick up, Axelay at the start of every level lets you change your weapons out with ones you unlock as you progress through the game. In Axelay you are given three different weapons to use which you can alternate through with the L and R buttons at any given time. These weapons can later be changed out with ones you unlock. The weapons also count as a pseudo hit gauge as every time you are hit you loose access to one weapon until you have none and explode. 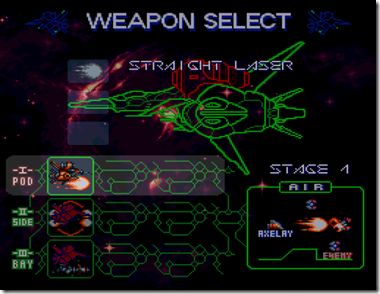 All the weapons in Axelay are unique and have their own respective features and attack power. For example the straight laser is a slightly stronger version of the regular laser your ship has if it loses all its weapons the straight laser is only capable of firing straight ahead but fires very rapidly. The Spread is about as strong as the regular laser but is capable of shooting all around your ship. Finally the Macro Missile is the strongest of the three starting weapons but pauses for a second between firing. All weapons aside from Bay weapons have a secondary missile which can be fired constantly, Bay weapons are better versions of the regular missile so they fire using the missile button. 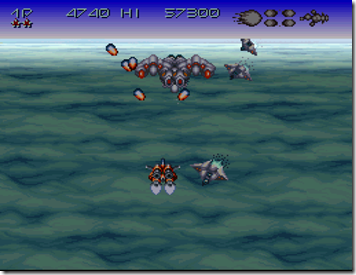 Generally every level contains hazards just as much as it contains enemies that wish to kill you by crashing into you. These hazards vary from level to level and range from flying rocks to closing doors to lava. At times the hazards may seem like no problem but when you have several thrown at once while the levels pace increases You’ll want to check your reflexes. 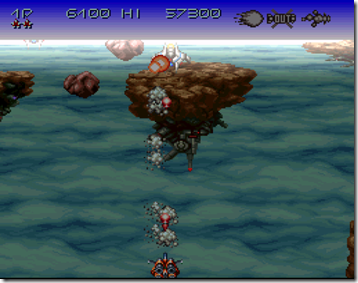 What is this, how is this even possible?

In most of the levels you will encounter both a mini-boss and a end of the stage boss, this will not happen on all levels but will happen on most. The mini-bosses usually aren’t to much of a challenge as they tend to keep to a pattern, but the end stage bosses tend to mix it up. The bosses are usually themed around the stage you are play for example. . . 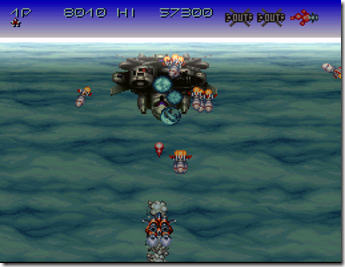 The mini boss for the first stage is a crazy giant harrier jet thing which launches missiles and lasers at you.

As you can see from the screenshots the game has some very well designed sprites, this carries through the entire game. The sprite work, backgrounds, and music all had a lot of care and effort put into them and they are all quite good in their own right. Despite this though while playing you generally will not have much time to bask in the games aesthetic beauty as you will most likely be trying to not die. . . a lot.

Now this game is difficult, and I mean really difficult. I’ve played most of the Gradius games and they pale in comparison to this game. What adds to the difficulty is the lack of the Konami Code in this game so that you can increase your amount of lives or continues. Instead you are given four continues and three lives per continue. Now at first you may be thinking “surely that must be enough to complete a simple space shooter game?” Well that my friends is where you are wrong. For a first play through where you have no idea what to expect the hazards will absolutely slaughter you, later so will the enemies. However this is a game where you get better by playing it over and over, as you learn what to expect you can avoid the hazards and know how to react to certain enemies. So despite its difficulty if you give it enough time you will eventually plow through it.

This is an example of one of those games that are so hard that when you beat it you gain a feeling of satisfaction at triumphing over it. I’d place up with Ninja Gaiden for the rewarding feeling you get over beating it. This is a game I would recommend to those seeking a challenge or to general fans of space shooters. It may be hard, but who doesn’t like a little challenge now and then? 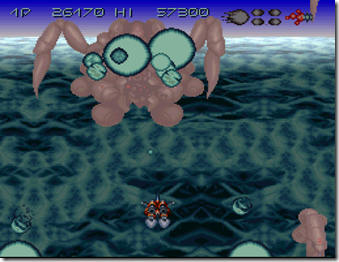