Konami is known for bringing outstandingly high-quality games to arcades and home consoles for years. They brought us such classics as Contra, Metal Gear, Legend of the Mystical Ninja, Rush 'n Attack, The Simpsons arcade game (which, let's face it - is one of the only great Simpsons games,) and TMNT: Turtles in Time just to name a very few. They also are responsible for many sleeper hits, including this 1991 arcade masterpiece known as Sunset Riders.  While it is not the household name that games like Contra, Tiny Toon Adventures or Lethal Enforcers are - it is a fantastic game that is an absolute must for your collection.

Originally released in the arcades in 1991, Sunset Riders was ported to both the Sega Genesis and the Super Nintendo. Like most games brought to both systems, there are differences between each version. I personally have more experience with the Super NES release, so most of this review will focus on that particular version. However, it's important to get the differences between the two versions out of the way; that way you can make an informed decision on whether or not you would prefer the Super NES version or the Genesis version.

The original arcade game allowed up to four players at one time and of course, (being the original release) does not suffer from hardware limitations or strict censorship codes - thus being the truest version of Sunset Riders. However, Lukie Games doesn't have arcade cabinets of it on hand and you're not likely looking for a big bulky cabinet anyway. The Genesis port came first and has a handful of differences from the arcade - mostly due to hardware limitations and localization. For starters, your roster of four characters is truncated to only two: Billy and Cormano. The amount of bosses is also cleaved in half - leaving you four of the original eight bad guys. The levels are rearranged and altered as well. However, something that the Genesis version has uniquely above the other two releases is a versus style gun fight where you and another player can test your quick-draw skills.

The Super NES version is more faithful to the arcade version, but also has a few changes here and there. For starters - your roster of characters is correct; however, only two players can play this game at a time. C'est la vie, multitap! Much of the other changes are due to Nintendo's conservative censorship policies. For example, the ladies in the game are wearing much less revealing attire, your characters no longer smoke or booze it up, and the Native American boss is renamed Chief Wigwam from Chief Scalpem. How this is more politically correct is kind of a mystery, but I'll buy that they were at least TRYING not to peeve the Native community. The graphics, sound and music are all top notch on the Super NES version and are noticeably less impressive on the Sega Genesis port. However, the Super NES version fetches a higher price tag, so it is up to you whether or not these differences will impact your buying decision. For serious collectors - why not get both?! 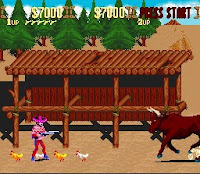 The gameplay of Sunset Riders is fast and addictive! If you love Contra, you will be well prepared for Riders, because the gameplay is very "Contra-with-cowboys." It takes great skill to avoid those bullets and your finger will constantly be on the trigger button at all times. If you want an extra challenge, crank that baby up to HARD mode and it will really feel like Contra. The western elements are all over this game and it makes you really feel like you're Clint Eastwood or John Wayne wasting a village full of bandits. There's stage coaches, saloons, train-hopping, cattle stampedes, falling boulders, and more. The game is fun by yourself, but even better with a teammate! This is definitely the game you bust out if you have a friend, girlfriend, cousin or whathaveyou come into town that wants to check out your game collection. Unless you're a seasoned gamer or have the difficulty set to easy - you'll really appreciate the extra help another player can provide in getting further in this game.


Some of the highlights for me are the music, sound and humor. The game is full of great wild-west music and sounds that feel ripped right out of an episode of the Lone Ranger. The gunshot sound effects and stampeding bulls are satisfyingly accurate to a good, cheesy old-school western. There are hilarious scenes like the first boss battle where you knock Simon Greedwell out of the window and he bellows "Bury me with my...money!" Which sounds like "Marry me to my...money" through the Super NES' soundchip, but nonetheless is a comically corny one-liner that makes Sunset Riders feel like the authentically American western that only a Japanese game company could produce!

In all honesty - aside from the few localization changes and the absence of a four-player co-op mode, I have absolutely no criticism of this game. It's addictive as all get out, the graphics are colorful and detailed, and the game feels like an authentic arcade port in your own home. It's a pricy game, but it's worth it. Grab a copy and a friend and blast through 8 levels of cowboy goodness. Yeehaw!