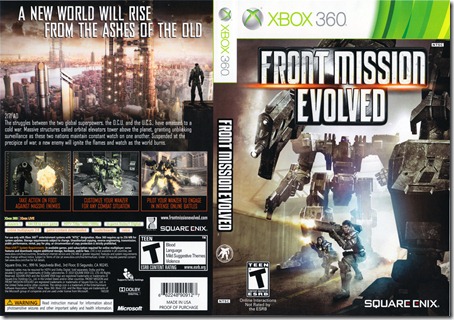 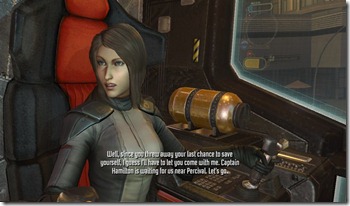 O.C.U.’s finest.
So the story of the game is pretty simple and isn’t anything that hasn’t been seen before, the main character is a grease monkey/researcher who designs and builds mechs (but has the free time to workout and gel his hair) who’s father is killed prompting him to seek revenge. Over the course of his quest for revenge he joins the military and falls in love with a woman he shares only minor dialogue with, then with little explanation she joins the big bad and the main character decides his mission is no longer about revenge but about saving her. By the actual end of the game, and several pointless deaths later, the main characters priority should be about saving the world but instead decides saving the girl he barely knows is far more important. 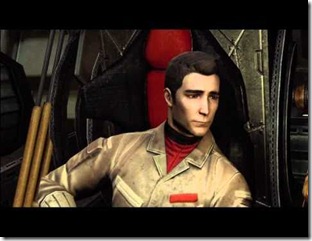 On the bright side the protagonist is easy on the eyes.
One of my biggest gripes with the game is the story and the pacing, the story is broken up into five acts and each act can be cleared in an hour at most. The stages aren’t very expansive and limit exploration making the game very linear. You more or less travel in a straight line from start to finish with a boss battle at the end of each act. When the game starts we are introduced to the main character who all we ever learn of is that he designs Wanzers and so does his dad, he receives no other character development and his motives throughout the entirety of the game are all selfish making him pretty unrelatable as a character. The rest of the cast gets little introduction and besides the love interest who gets about five minutes of backstory most of them just die in a way that if they had been developed would have been tragic. I spent a good deal of the single-player campaign screaming “What?” at my television because I wanted the game to explain how a person inside an apparently undamaged (or at least not exploded) mech could possibly die especially when that person has experienced no physical trauma. What little story there is in this game moves far to quickly for any events to fall into place and the end result winds up being a game with a story that raises far to many questions and ends without tying any important loose ends. 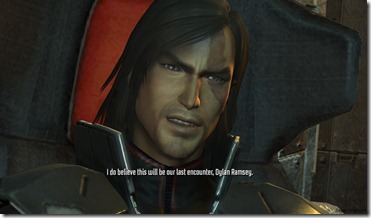 Like what the hells this guys story is!
Front Mission Evolved has one redeeming quality, the controls. The controls for Front Mission Evolved are so well done and the gameplay is so great that I almost forgot how shitty the story is. The controls are similar to that of the Armored Core games, but the Wanzers are for more responsive and move more realistically. The opening tutorial didn’t take very long and I found myself mastering the controls by the end of the first level. At no point in time during my play through of this game did I die or get hit unfairly due to bad controls. If I ever got shot and blown up it was because I suck at video games and not because there was some asinine delay in controls or some other such nonsense. Honestly I would recommend this game based solely on the experience of the controls, I have never to this day played a game with such fluid controls and place this in my personal favorites list purely because of them. 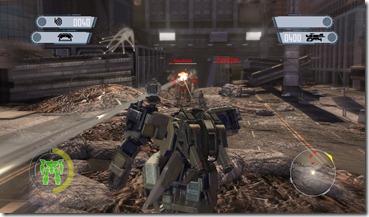 If only all these zombie games had controls like this.
Front Mission Evolved has a few bonus features like Online Multiplayer (no local :( ) and the option of replaying any of the stages from the single player campaign. I tried several times to find a game to join online but was always greeted with empty rooms, meaning that I could not experience the online multiplayer. If youtube videos do it justice it looks like it would have been a jolly good time. I feel that this game is more one of those guilty pleasure ones, it’s to bad to recommend to a friend but it has qualities to it that you just can’t help but secretly enjoy it behind closed doors. To those who are looking for some turn-based goodness I’d recommend you avoid this, but if you want a contrived love story with great controls and giant robots this is definitely the game for you. 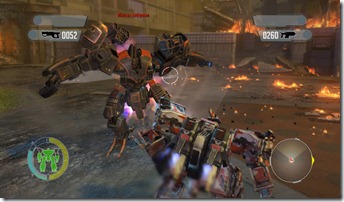 Did I mention there are giant robots?
Posted by Unknown at 11:01 PM