Mikes Gameboy Game of the Week: Yu-Gi-Oh!! Destiny Board Traveler 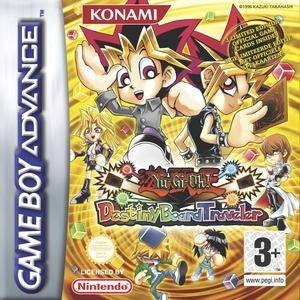 Yu-Gi-Oh!! Destiny Board Traveler is a board game adaption of the popular card game by Konami. The game plays much like the regular card game as you alternate between turns with three other players only instead of a playing on a card field everything occurs on a simple square 5x5 game board where each player walks around trying to get the most monsters in play. Destiny Board Traveler boasts a cast of twelve characters (six you have to unlock) all of which have a unique special power that you can use to attempt to turn the tide of the game in your favor. You cannot use these powers whenever you want, you instead have to wait an indeterminate amount of time until the game prompts you to use them, after that you can use the power at your discretion. Before I go any further let me warn you this game has no tutorials. Everything that occurs in this game you will have to learn by yourself through trial and error unless you buy a copy with a manual. 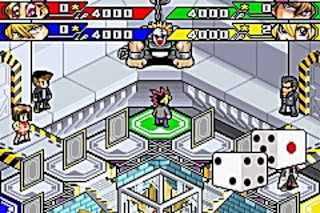 Seriously, what is going on?
Dice. Dice are a thing in this game. Now this isn’t like Dungeon Dice Monsters where you strategically place dice trying to out maneuver your opponent instead you are rolling dice in order to place a monster and in order to activate effects in battles. A system entirely built upon dice rolls normally would work if you had the freedom of putting together some sort of strategy to go with it, instead when you choose the character you want to play as it automatically assigns you a default deck that you cannot edit so you are stuck with the poorly put together decks based on the decks of the main casts anime decks. In my play through of the game the most common problem I encountered was situations where the monster I was summoning was to weak to take a creeper space. Oh I didn’t mention creeper spaces and how they factor into the gameplay? Well as you travel around the board there are twelve spaces which you can summon your monsters, but to do this you need to defeat whatever monster is already there and by default there is a random monster in each spot called a “creeper”.

“But Mike what is the significance of summoning monsters?” 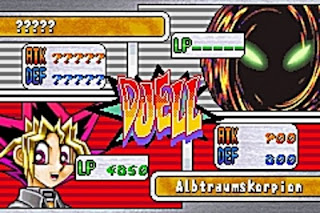 They ride around in black vans and try to attract you with stories of ponies and candy.
Typically in a Yu-Gi-Oh!! game the main objective is to drain your opponents life points or force them to run out of cards, in Destiny Board Traveler life points are still a factor, but instead of losing through running out of cards they replaced it with winning by getting [x] amount of stars (with x being an amount you set before you start the game). These stars you acquire are based on the combined levels of all your monsters, say you needed ten stars to win, by having five level two monsters or two level five monsters you would instantly win the game. The objective of any given game is to either get whatever the designated amount of stars are or to knock all of your opponents life points down to zero.

As I currently do not have my Gamecube Player I was only able to play the game on my Gameboy Advance and Nintendo DS and one of the biggest problems I encountered (besides the lack of any sort of tutorial on how to play) was that the text in the game seemed squished and sometimes was hard to read. The card artwork was very low-res compared to other Yu-Gi-Oh!! games released at the time like Stairway to the Destined Duel or Eternal Duelist Soul, the character sprites also lacked any sort of animation besides the walking and standing animation which was pretty lame as the boards were interestingly designed. For all this games faults it is still an interesting experiment, Konami was obviously trying out different things with its big money making series (see: Dungeon Dice Monsters and Capsule Monsters). A great example of this is that you can link together 5x5 boards to increase the overall size of the playing field after you’ve beaten the game enough times (assuming you have the patience to endure that long). I' would recommend any regular fan (or any Non-Fan) of the Yu-Gi-Oh!! series stay clear of this game, this game only has appeal to those who are looking to collect games or to those who want to experience a failure of a game. 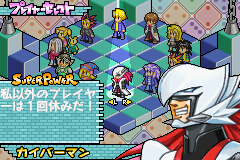 It does have Kaibaman, I guess that's a positive thing?
Posted by Unknown at 5:23 AM