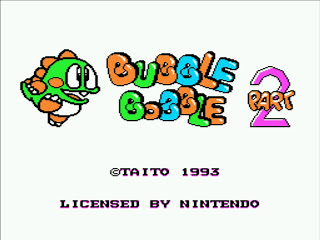 There are roughly 800 games in the NES catalog, but probably less than 20 licensed/unlicensed carts that usually hover around the $100 or more mark. Some, because they are universally loved and extremely sought after, others because they are supremely rare, and still more because they have a healthy amount of undeserved hype behind them. Let's face the facts - you're probably never going to get your hands on a complete copy of Stadium Events and even if you do - you wouldn't really feel that satisfied having it. However, there are some games that are absolutely worth picking up for the 100 - 200+ dollar asking price if faced with the choice and near the top of that list is Taito's 1993 classic Bubble Bobble part 2.

First and foremost, let's cover why Bubble Bobble Part 2 is a significant collector's item. Like most of the other highly collectable licensed NES games; Bubble Bobble part 2 was released late in the NES' lifespan. Starting in 1993 and working into 1994, NES game production slowed down to make way for more Super NES games, which was becoming the dominant system at the time. So this game is either scarce because:

A.) Buyers had moved on to the 16-bit systems and weren't picking up these last few NES games
or
B.) There was a smaller production run on these final games as a result of the SNES' increased popularity.

Whatever the case may be, Bubble Bobble Part 2 is considered a rare game in the NES library. It should be noted that (for some confusing reason) there are no less than three different games that bear the title or tagline of "Bubble Bobble 2." For the NES, there is Bubble Bobble Part 2 (this game) and Rainbow Islands: The Story of Bubble Bobble 2, which was released 2 years prior on the NES and is the original "sequel" to Bubble Bobble. There's also an arcade game called Bubble Symphony that is also known as Bubble Bobble 2 in some regions. However, that's only available here in the states in the Taito Legends 2 collection for Xbox, is not an NES game, and thus you don't have to worry your pretty little head about it. These games are confusingly named, confusingly numbered, and that's just how it should be in this topsy-turvy world.

There you are asking yourself, "Ok sure. The game is rare and worth quite a nice chunk of change - but is it worth it to me? " While I shouldn't be able to answer that question for you; I can. The answer is "yes."

Anyone familiar with the original Bubble Bobble will need little introduction to the basics of the game, but even for the uninitiated the gameplay is fast, fun and simple. You control one of two lovable dinosaurs - who in the cutscene at the beginning of the game have their girlfriends taken away by some mean ol' monsters. A pretty original storyline if you don't count Super Mario Bros, Splatterhouse, Ghosts 'n Goblins, Double Dragon and about 300 different early videogames. All kidding aside, the cutscene looks great and sets the tone for the improvements made over BB1 throughout. 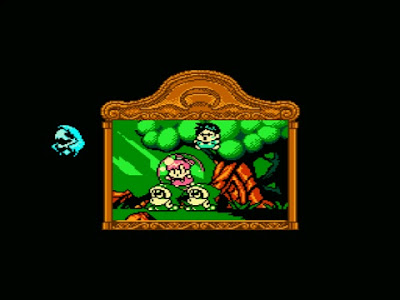 As stated before, the gameplay is as straightforward as it gets. Your dinosaur spits out bubbles that can trap enemies (and also provide a nice floating ledge to double-jump from.) You must progress through a mountain of different stages using your trusty bubbles and well timed jumps. If your character falls through the bottom of the screen, he comes out of the top. Anyone familiar with the original game will have absolutely no problem picking this one up. 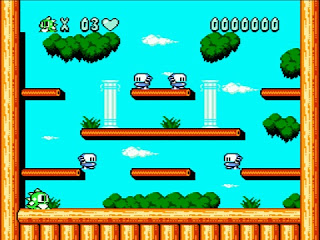 There are a host of new enemies to battle in this one including bosses; which, to the best of my knowledge were nowhere in the first game (after all I never made it past stage 15 or so in Bubble Bobble. These games are tough.) 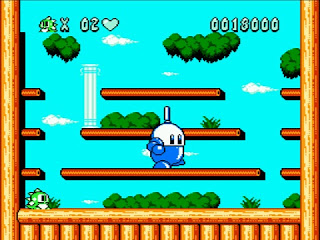 Woah! What have we here?!

The difficulty level compared to the first one is slightly easier - however, enemies like the flame guys and bosses serve as a nice balance to the mildly easier difficulty. However, make no mistake - Bubble Bobble part 2 is difficult. These games are notorious for being really long and like most arcade/action games get increasingly more difficult as the stages progress.

The graphics aren't a "night-and-day" difference from Bubble Bobble 1, but are still greatly improved. The characters look sharper, the levels are more colorful, and the cutscene at the beginning is a nice bonus. Another insanely popular NES game that the graphics can compare nicely to is Kirby's Adventure. Cutesy, colorful, playful and altogether adorable - the graphics are sharp and really display some of the best that the NES can represent. And just like the first game, the music is infectious. My only complaint about this game is the lack of the original theme song. However, this game has a snappy theme in its own right and all of the sound effects are sharp and sound arcade-quality.

I cannot recommend this game highly enough. Yes, the pricetag may seem steep at first - but if you're looking to establish a pretty awesome NES collection, this should be the first "upper-level" game on your list. Just imagine the bragging rights! I bet you that very few if any of your friends have this one - and you didn't have to fork over 20k for it like you did for Stadium Events! If the game is available to add to your cart now, I suggest doing so. If not, that's why LukieGames has a "Put me on the Waiting List" button. Push it now. You'll be glad you did! 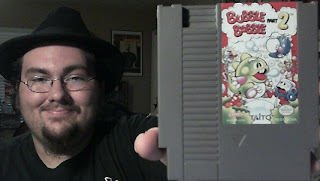