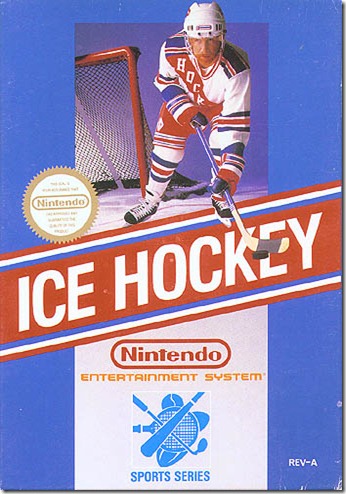 Oh Nintendo, you sure do love yourself some sports.

Ice Hockey on the Nintendo Entertainment System is as simplistic as it is incredibly fun; the gameplay is fast paced and the controls are smooth. Nintendo Power rated Ice Hockey at the 142nd spot for best game on a Nintendo system and it was also featured on IGN top 100 list sitting at the 100 mark. Ice hockey stands as one of the best sports games ever released on the NES with its incredibly addictive gameplay and multiplayer options. The game isn't totally faithful to regular hockey standards as each team only consists of five players (including the goalie), and instead of the players involved in fights both being penalized, whichever player loses the fight is sent by himself to the box for a three minute penalty. Icing can occur but is rare, and that is the only other call aside from fights that the game has. 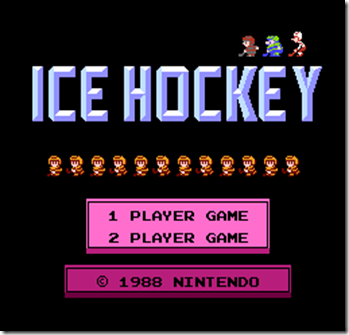 Amazingly a lot of Hockey Players were born this year, coincidence? I think not.

As mentioned earlier the game’s modes come in two flavors: single player and multiplayer. The only major difference between a “2 Player Game” and a “1 Player Game” is that your opponent is either controlled by an actually person (i.e. a friend or the like,) or a computer. Each mode consists of one match which is broken up into three periods. Each of which are set to seven minutes as a standard but can be changed along with the speed of which the players move and how fast time passes. If there is a tie by the end of the last period, a shootout occurs between the two teams where they shoot to win, however if both teams still have the same scores by the end of the shootout an overtime match will occur where the teams will face off once more. If there is a tie by the end of overtime another face off occurs and this cycle repeats indefinitely until a team wins.

Once you’ve selected a mode, you are treated to the settings selection screen where you pick what team you wish to play as. Team-wise you get to pick between the United States, Sweden, Poland, Canada, Russia, and Czechoslovakia. There are no benefits to choosing one team over another as they are merely aesthetic in function and are just palette swaps. Though I’m sure everyone has ideas for dream matches so it does add some form of competitiveness for those who root for teams from other countries. You can also change the speed of the match, it basically increases the speed of the players and the speed at which the clock times down. The time setting is fairly self-explanatory, it controls how long the periods are. 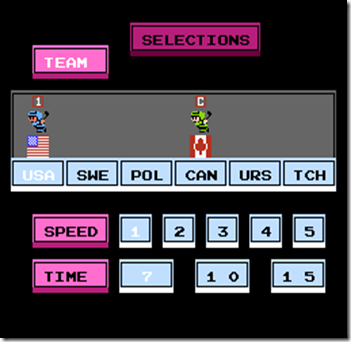 A rivalry that has existed since the dawn of time, a tale of hockey sticks and pucks eternally retold. . .

Once you are done with the selections screen you advance to the line up screen where you select your four players. You get the option of three different types of players, Large, Small, and Medium players. The Large players are strong and can knock most players aside, and they are great at shooting the puck, however they are slow and aren’t very good at face-offs. Small players are fast and great at face-offs, however they have weak shots and can get knocked aside easily. Medium players are average in all areas, they are generally the vanilla players who specialize in no particular area but aren’t terrible in any particular area. After choosing your line up the game starts. 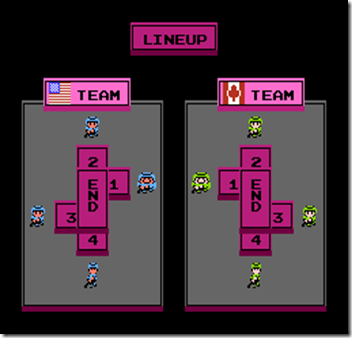 Most people would make jokes about gym class, but I’m way to classy for that.

Just like with actual hockey the puck is served by the referee and then it’s a fight over which team gets it first, from there you make mad dashes and passes to get the puck to the goal. Everything is straightforward from here. You have the ability to pass the puck and shoot it in whatever direction you press on the D-pad, and when you don’t have the puck you are able to flail your stick around to initiate face-offs or to get the puck away from the other team. 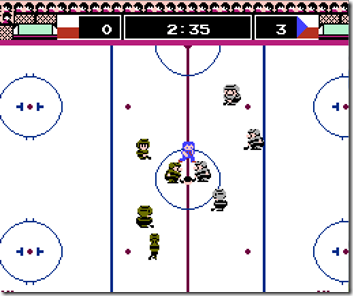 In between periods the teams change sides as per usual but in between the second and third periods you are treated to a somewhat silly Zamboni ice fixing show where several people wearing goalie masks patch the ice with Zamboni machines. 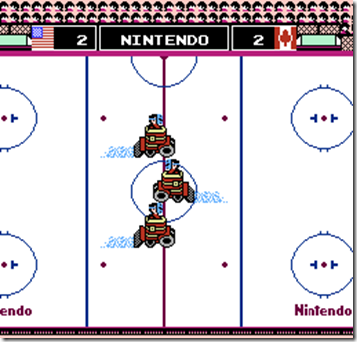 Or maybe they are all Jason Voorhees? D:

After third period a team either wins or you go into a shootout (as mentioned earlier), shootouts can be difficult sometimes as the game forces you to move forward constantly only allowing you to move up, down, or shoot. 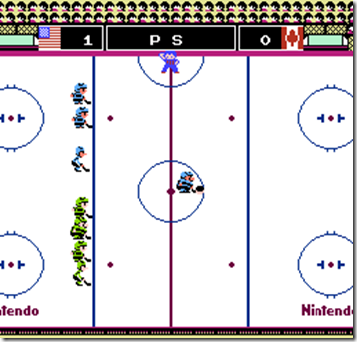 No pressure dawg, no pressure, NO PRESSURE MAN!

As mentioned earlier the controls for the game are very simplistic, INCREDIBLY SIMPLISTIC, so simple in fact that your entire team is controlled by your d-pad. Whatever direction you push on it is the direction your entire team will travel in. At first this may seem frustrating but after you get the hang of it you never look back from it. The movement is stiff, you can move in eight different directions and you can use your stick flailing and shooting controls flawlessly. The only part where controls suffer is during shootouts where you are constantly being thrust forward and you have to make a quick decision on where to go and where to shoot (like in real hockey :o). 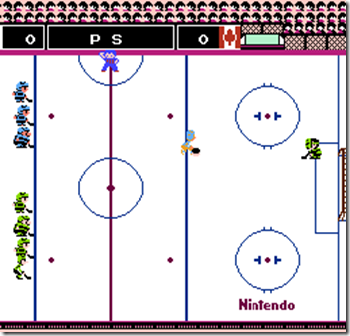 Graphics-wise it’s nothing pretty, but it by no means is an eyesore. The graphics work well with the gameplay, they are just as simple as the game itself and lend to it an incredibly endearing air. The music for the game is just as simple with it only having a few songs and sound effects.

If there is anything I can really say about this game, its that the game is deliberate in every field. The game has no extraneous extras, it has what it needs and what it has is down right awesome. The game has plenty of pick up and play capacity and requires no real dedication so it can easily be played casually or hardcore. This game is great for both retro sports fans and collectors. I highly recommend it, as it has practically no faults and is an incredibly fun game. Medium player has always been a party pooper.

Fun Facts: The Team Lineup is different in different regions, in the American release the roster lacks Japan which was replaced with Czechoslovakia, the PAL version also suffers from this.The Japanese version lacks Czechoslovakia but has the rest of the roster in tow.