Hands on with Dragon Quest IX

Dragon Quest is one of the longest running and most recognized Nintendo franchises. The latest installment is being released next month (July 11th to be exact) on the Nintendo DS, Dragon Quest IX: Sentinels of the Starry Skies. Jesse and I had a chance to check out the game and were impressed. One of the things I was most excited about was the multi-player mode, which allows your character to transfer to another world in you friend's DS. Once there you can cooperate in battles, but also have complete control of your character if you want to wander and explore on your own.

Another aspect that appealed to me was that there are no random battles. When traveling along on the map you see the enemies in the area, and can approach or avoid if you prefer.

Overall I enjoyed sampling this game and will definitely be picking it up next month. For more details check out Nintendo's promo video here. 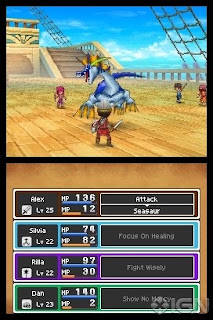