NINJATENDO Pt 1: How the Ninja Craze Hit the NES Era in a Big Bad Way 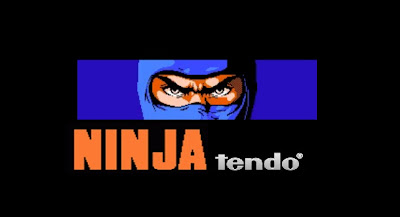 Television, Film, Video Games, and Music. The foundations of our media-oriented society and the building blocks of a mutual relationship that society has with its entertainment. Many can argue that trends in entertainment have a profound impact on societal trends, and others could argue the opposite. It can lead to a "chicken versus the egg" conundrum of what came first; the popularity of cheesy polyester leisure suits or the popularity of Miami Vice. All I know is that I worship at the altar of Don Johnson and don't trust anyone who doesn't.

So here I present a "chicken and the egg" question: how, why, when, where did America pick up its fascination with ninjas? Somewhere in the 1980's, films and video games were overrun with "Ninja" this or "Ninja" that. My best guess is that the success of Teenage Mutant Ninja Turtles played a key role in everything in the late 80's to early 90's being Ninja-centric, at least over here in America. You had films like Revenge of the Ninja, Ninja Vengeance, 3 Ninjas, Surf Ninjas, American Ninja, Zombie Vs Ninja, and more. Everything was ninja, ninja, ninja.

So naturally, much like every cold-war era Atari or Intellivision game being named "Space" something or "Star" something, you had no less than at least 10 Nintendo games that are directly related to the dark, mysterious art of Ninjutsu. Some of the games were groundbreaking and hugely influential (the Ninja Gaiden series) and others are confoundingly confusing (The Last Ninja.) Let's dig in!

Legend of Kage: In 1985, Taito released an arcade game that, while kind of primitive now; is a strangely addictive action platformer. You play as the ninja Kage trying to save your princess from her evil captors by running through the forest, jumping through trees with amazing, Crouching Tiger Flying Daggers-style wire-fu leaps that no mere mortal could possibly make normally without a Game Genie. You have to slash your way through a sea of faceless nemeses that all want to kill you. Occasionally they drop power ups which will help you upgrade your outfit to a different color allowing you more hit points. It's a generally common and inexpensive game so I definitely think it's necessary for your collection.

Wrath of the Black Manta: Taito did a damn good job with striking gold on Legend of Kage. It's not in the top 10 games for the NES, but it's one of the better common titles from the 8 bit era. So you would think that in 1989 when they released Wrath of the Black Manta, that the game would rock the world. Sadly, that's not the case. Wrath of the Black Manta is a bland, by-the-books action scroller/platformer where you control a rather slow, clunky ninja through hordes of faceless enemies. It's nowhere near as lifeless as say; the Schwarzenegger games, Lethal Weapon and the like; but it's still nothing to write home about. That being said, it's a common and affordable title so one couldn't really complain about the reasonable price-point.

The Last Ninja: This 1990 port of the sequel to 1987's The Last Ninja for the Commodore 64 is a strange game. The game definitely shows its Commodore 64 roots in the graphics and gameplay department. It is absolutely fair to call this game "unique" because it is unlike any other NES game I have ever played. The player controls a ninja in an isometric 3d environment trying to dispatch with bad guys and solve basic puzzles to unlock doors and advance further in the game. There is a relatively open world to explore here for a Nintendo game and there is danger around every corner. The closest comparison I can make to a popular game would be the early Alone in the Dark titles. As with those games, there are problems arising from hit-detection errors and overall clunky controls. I can only imagine this game would play much smoother with a joystick (haven't tried it with the NES Advantage - perhaps you guys and gals should!) as I'm sure it would have been played on the commodore 64. This makes enemies tough to kill and puzzles difficult to solve, leading to some frustrating and confusing moments.  It's one of the more unique items on the list and should be played. I cautiously recommend it: it's often aggravating, but fun.

Ninja Kid: Moving from a very atypical NES game to a very prototypical one, we get Tose's 1986 action-platformer, Ninja Kid. Upon first glance, our main hero looks very familiar. Could it be...? Yes, it is more or less the same sprite as the lovable ghost/cherub from Tose's Chubby Cherub! While both games came out around the same time here in the states, Chubby Cherub actually predates Ninja Kid, and boy is it obvious. That's not to say that Ninja Kid is drastically different than Chubby Cherub (both have similarly primitive graphics and similar arcade style gameplay) but the areas where Chubby Cherub fails (it is incredibly frustrating, random, and difficult) Ninja Kid succeeds. The controls are relatively tight, the platforming elements are rudimentary but serviceable for an arcade style scroller, and the enemies don't seem to block off your path and cheap shot you as much as in Chubby Cherub.

Ninja Kid does feel amazingly dated, but is a lot of fun in a similar style to the first Goemon game. Run around, jumping between platforms, shoot at enemies, wash, rinse, and repeat. There are minibosses and a map screen between levels that allows you to pick which level you want to play first. It's a lot of fun and is relatively dirt cheap compared to its uncommon sibling Chubby Cherub, so I recommend picking this one up!
Zen: Intergalactic Ninja: Rounding out this segment of ninja-related fare, we have Konami's 1993 action game Zen: Intergalactic Ninja. Based on a comic book that nobody I know has ever read, Zen focuses on a super-powered test-tube Ninja who is fighting the vile, despicable Lord Contaminous on his crusade to pollute the planet. Subtle job there, Message Hammer...really subtle. The action in Zen: Intergalactic Ninja is split into a couple of styles: one is reminiscent of games such as Isolated Warrior; an isometric 3d style environment where it is Zen versus robots, pitfalls, and the clock. A few stages are broken up into an action platforming game ala GI Joe, Batman, and a million others and there is also a railway car stage ala the Battletoads spaceship racer stage. The action is fluid and fast, the graphics are slightly muddy, but overall decent and the music is truly rockin'. The problem with Zen? It's a tough grind. In the isometric stage: the same problem that Isolated Warrior, Gremlins 2, and many other games with this perspective plagues Zen: a problem I like to call "the I-swear-I-made-that-jump!" issue. This particular perspective lends itself to a lot of second guessing when it comes to how close or far you are from the moving platform you're trying to land on or the bomb/laser/enemy you're trying to avoid or kill. It's not impossible, but can provide a lot of frustrating moments! The platforming stages are much more forgiving but still provide a huge challenge as everything is trying to kill you at once. Even though the difficulty level is relatively high, I recommend Zen: Intergalactic Ninja for your collection based on the variety of gameplay and originality. It is one of the more uncommon games on the list and is priced accordingly, but if you like a challenge and a bit of variety in your games, you can't go wrong here.

That's just round one of this two part series on Ninja games for the NES. Stay tuned as we recap some of the heaviest of heavy hitters and a few more hidden gems. You won't want to miss it!


Special thanks to my buddy James for the idea!
Posted by Chris Many at 4:25 PM