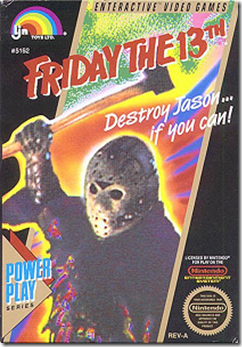 SPOILER: You can’t destroy him because he’ll always come back in the sequel.

In the spirit of the season I decided that I would try out playing some licensed horror games. I thought to myself, “Hey Friday the 13th was a pretty good movie I’m sure they probably made some halfway decent games!” Well I was wrong, horribly… horribly… wrong. I played Friday the 13th for the Nintendo Entertainment System which was published by LJN studios which apparently is a pretty loathed publishing company. I can definitely see merit in disliking games published by LJN as I can safely say that Friday the 13th is an objectively bad game just like a vast majority of other titles put out by LJN. I personally am a big fan of the horror genre and I like to try and play as many games in that genre as possible everything from Alone in the Dark to Amnesia the Dark Descent but this game is something completely different. Very rarely do I find video games bad in the same sense as bad movies but just like how the movie Insidious was an awful sham of a horror film Friday the 13th for the NES is a terrible sham of a horror game. 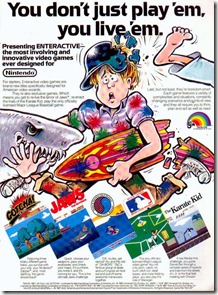 And live with the memory of having played some of the worst games to ever exist.
In Friday the 13th you play as one of six possible Camp Counselors George, Mark, Paul, Laura, Debbie, and Crissy. Any of those names ring a bell? No? That’s because none of them are characters from the movie this game is supposedly based off. The objective of the game is to succeed at not dying for three entire days and nights all the while having to prevent Jason from killing the counselors and the children residing in the camp. In total you have access to six counselors to play as who effectively act as your lives as anytime you die you can just switch to another counselor. After all six are gone you lose the game. There are multiple areas you can travel through each with its own gimmick like how left is right when traveling on the main road, the interiors of cabins are third person dungeon crawlers and how the forest is a ridiculous maze that you should never even consider entering. In order to "win" the game you will have to enter the cabins at some point and you will have to travel along the road throwing rocks at zombies the entire way, but the forest you can totally avoid and I recommend this highly. In several attempts at play-throughs the main reason I lost was because I tried to use the forest as a short cut to get to another area but wound up getting lost  every time as each area looks identical which is a pretty big problem considering the entire thing is broken up into many sub areas that link into one another. 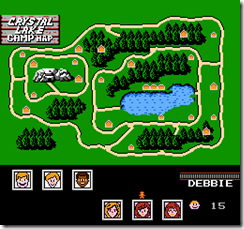 Honestly the kids in the cabins the woods were as good as dead anyway.

I'll give the game credit in that the controls are fairly responsive but the gameplay itself is horrendous. The player has two different ways of avoiding being horribly murdered by the hordes of undead, a jump, and the ability to throw rocks these would be great if they were useful. Now bear with me for a moment. One would assume that its hard to flub something as simple as giving the player the ability to jump and attack enemies but LJN messed that up. The starting weapon is a rock that does barely any damage and makes fighting zombies let alone Jason an impossibility as it does so little damage and lacks any sort of stun ability that it might as well be the cane in Dr.Jekyll and Mr.Hyde. The jumping despite being fairly responsive is pretty useless as the zombies operate on Ghosts and Ghouls logic where they will pop-up underneath you and in proximity of wherever you land after jumping. Once you get inside a house everything changes into a round of dungeon crawling ala Wizardry where you navigate cabins and pick up and use items in order to further objectives and prevent Jason from killing you.

I’m going to level with you. This game is so god awful I wouldn’t recommend it by any stretch of the imagination to anyone but a collector or the hardiest of retro gamers. It is likely that there are some features that I may not have discovered during my playtime of Friday the 13th despite having played the game to completion once and having played to failure a plethora of times having admitted this I want to assure you all that I found this game to be terrible in all regards, but it is playable. If you try hard enough and you make sure you draw out a map as you travel through the forest or the cabins then your chances of beating the game grow exponentially. I’d recommend that if Jason pops up as you are traveling from cabin to cabin that you run as the likelihood of you beating him without having picked up the knife is pretty low. Remember kids, LJN is bad and they should feel bad. 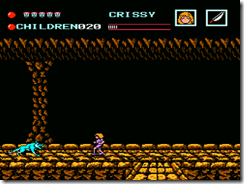 Especially because they apparently can’t comprehend that animals aren’t blue.