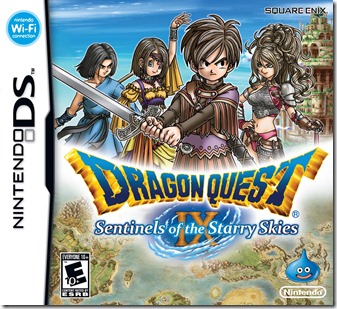 Dragon Quest IX Sentinel of the Starry Skies is, or rather was, incredibly revolutionary when it came out a few years ago as it was the first game for the Nintendo DS to have a sort of proto-spotpass mechanic where you could leave your game on and wander around your town or city “Canvassing for Guests” which can net you treasure maps, friend codes, and even rare items! In Japan this feature was so popular and so widely used it set a world record for the most amount of people playing a game over local wireless; despite the obvious success of the feature in Japan it apparently hasn’t been nearly as successful in the west due to lower population densities and the fact that the Dragon Warrior series has always been fairly niche in west. Gamestop, Bestbuy, and several other retailers setup events to remedy the problem which yielded mild success. Dragon Quest IX isn’t a one trick pony it not only boasts one unique feature it also has local and online multiplayer where you and up to three other people can wander around the entire world completely separate from one another or all together, to wrap it all up in a nice big bow the game also boasts enough features to keep you satisfied for up to 700+ hours going through the story, the post-story, exploring the world, getting all the items, and getting to know all the people of the world. 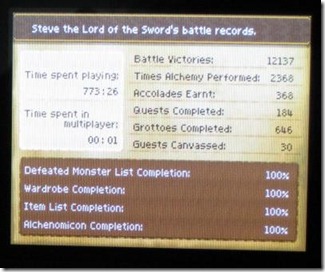 That shit be crazy.
The story of Dragon Quest IX Sentinel of the Starry Skies goes like this: You are a sentinel who’s job it is to protect a small town named Angel Falls in the Protectorate (the place where all the humans live). One day after returning the Observatory after looking after the protectorate tradgy strikes upon offering your prayers to Yggdrasil the Observatory is assaulted by many beams of light causing you and many other Sentinels to fall to the Protectorate. You come to in Angel Falls and realize that your wings are missing from there you travel the breadth of the world making friends, battling evil, and rekindling an ancient love all in order to protect the people of the protectorate. 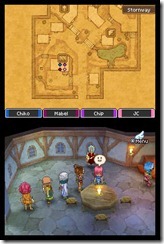 And hanging out in inns!
Full disclosure, this game did nothing but impress me. The writing for the game is hilarious with a great use of puns and nods to existing things (like when you need to find the Encyclopedia Gittanica). As you travel the world you’ll find that not every person speaks the same as there are regional dialects and colloquialisms which makes speaking to NPC’s much more interesting then in most games. The games story is loads of fun as I found myself enjoying the many characters and twists (spoilers?) once you’ve beaten the story some of the story characters can be recruited as actual party members for exploring the post game world. I’ve mentioned the word "Post” affixed to a few words and that’s because after you beat the story the game still has hundreds of in-depth quests you can pursue which expand on history of the world, character backgrounds, or yield awesome loot. 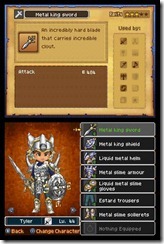 Spikes are heroic right?
Anyone who is familiar with the Dragon Warrior franchise probably knows it best as that series where turn-based battles are all done from a first person view with enemies that have very silly names. Well Dragon Quest IX has all the silly names but none of that first person nonsense, now battles are all happen in the third dimension but retain the turn-based system. Another dropped feature was the archaic random battle feature most RPG’s still cling to as all enemies are visible in the overworld and dungeons when you are exploring and can be avoided (assuming they don’t spot you) by going around them or using a skill or item to make you temporarily invisible. In multiplayer each individual player can engage in and end battles on their own separate of other players they can also each explore different parts of the world and towns at whim which is a pretty great feature.

I mentioned earlier that the game has over 700 hours of content, the main story is about 40+ hours and the rest is side quests, post-game story quests, and item quests. If anything when you play Dragon Quest IX you at no point will be wanting for something to do as quests and adventure almost literarily ooze out of the cartridge itself. Not only is there much adventure to be had but the world is fairly open-ended, once you get past the first couple of missions you’ll be free to explore the world at your leisure and the world opens up even more over time as you get spells and items that will help you explore. 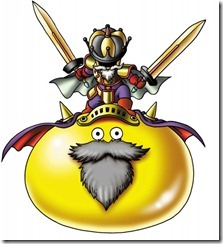 And there are King Slimes!
One key feature that I have neglected to mention was the character creation. Its fairly varied and the designs are done by Akira Toriyama who you may know from his work on DragonBall, Chrono Trigger, and Blue Dragon so the designs will look fairly similar to things you may have seen if you have played any game he’s watched or watched the animes he’s worked on. 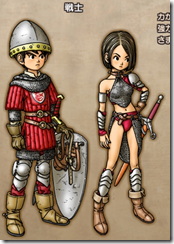 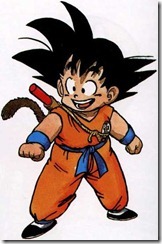 Obviously the protagonists are Saiyans, or Sun Wukong…
You can mess around with your characters height, gender, hair and face to make the hero you’ve always wished you could be, you can also do this with your companions as you can completely design them to look however you want them to and you get to even pick their starting class. Although these aren’t Bethesda level customization features they are good enough that you can create for yourself a unique set of heroes to save the world with. All equipment also appears on the characters which means you can also alter all of a characters equipment to change their appearance to look however goofy or cool you want them to be and with the large quantities of clothing and armor options then are tons of potential looks. 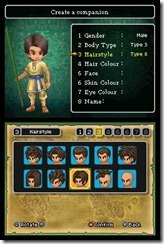 Or you can leave them in pleb gear and make them all pack mules while real heroes adventure.
Dragon Quest IX is by far one of the best multiplayer RPG’s I’ve played in a while and I highly recommend it to anyone who wants not only a game with loads of story and content but for those looking for a game to play with friends (they’ll need copies of the game too). At no point in my time playing this game was a disappointed the difficulty scaling, the humor, and the story all kept me engaged straight to the end and then some.  Pick yourself up a copy, you won’t regret it.
Posted by Unknown at 12:49 AM