When I was a kid, the combination of "rock 'n roll" and "video games" seemed like such a novel and awesome combination! Like peanut butter-and-jelly (and the even more awesome peanut butter-and-chocolate,) it would seem like the ultimate mash-up on paper. Keep in mind,  I was roughly 8 years old in 1993 - which made me too young to know about the mediocre Journey game for the Atari and it would be roughly a year before the horrific Aerosmith game Revolution X would puke all over my Super NES.  Naturally, a young Chris should have been worry-free in renting a game called "Rock 'n Roll Racing" for his Super Nintendo. Sure, racing games that don't feature either motorcyclists hitting each other with chains or Mario chucking shells at his brother don't tend to appeal to me - but this game has rock music and a groovy sci-fi backdrop. So the question remains: was it a great game and does it hold up now?

A tiny bit of history first (...and I get all of my historical information from Google and Wikipedia!) Rock 'n Roll Racing was developed by Silicon and Synapse. Ya know - that tiny upstart that became Blizzard frickin' Entertainment - one of the biggest game studios today. Published by Interplay in 1993, it is actually the spiritual successor (or perhaps follow-up) to the SNES game RPM Racing from 91-92. RPM racing in itself was a reboot of Racing Destruction Set from EA for the Commodore 64. So that makes Rock 'N Roll Racing actually "RPM Racing II." Err...or "Racing Destruction Set III." I prefer to call it "RC Pro Am III: This Time With More Space Mutants!" 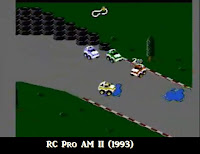 I would love to break down the excellent plot to you guys & gals, but there isn't one. The gist is this: you control one of six main racers (with two additional hidden ones) around racetracks in a top-down, isometric view, and proceed to blow up, trap, smash, outrun and bump your competition off the road.  Oh, and it has something to do with intergalactic racing. And Rock 'n Roll. You control racers such as Tarquinn, Katarina, Snake...wait, Snake? I'm sorry sir - there is only one Snake and that's Snake Plissken. And yeah, Solid Snake - but he's just modeled after Mr. Badass Kurt Russell himself.

One of the hidden characters in this game is none other than Olaf from the Lost Vikings! You can find my review for that wonderful Silicon and Synapse game here. Each of the characters differ by having a particular bonus strength in different aspects of racing, such as cornering or top acceleration, etc. I have to admit - they look an awful lot like characters from the later Might and Magic games. Not exactly hardened, alien, rock 'n rollin', race car drivin' material. Nonetheless, the game's presentation should look familiar to anyone who has played RPM, or the R.C. Pro Am games for the NES.


One of the most important aspects of any racing game is how it controls - and I can safely report that it controls fairly well. The caveat being that you need to upgrade your car to get the full potential of your vehicle (which only makes sense.) At the beginning of the game (depending on who you pick) your car can sometimes slide off of the track easily or have a little difficulty staying straight. Sometimes you will find yourself picking a character who is more balanced on the road but has less acceleration: in the end though - the differences in characters are small enough that after you win a few matches and upgrade your car, it all sort of levels out. As a racing game, R&RR is successful. The excitement of racing is also helped by the frequent outbursts of the announcer. The game features voicework ala NBA Jam and it helps the atmosphere of the game. It's a little crude by today's standards, but back during its release - having voiceover work in games that weren't on the Sega CD was always a pretty impressive feat.

So now that we know the "racing" portion of R&RR is pretty solid, how is the Rock 'n Roll? Admittedly, it's not the best selling point of the game.  Don't get me wrong, you've got great songs for racing, such as: "Radar Love" (on the Genesis version,) "Bad to the Bone, ""Paranoid," and "Highway Star." However, you would almost hope that since the game was being pitched with licensed Rock music as the key feature, that there would be a few more songs. I know that the Super NES and Genesis had a finite amount of space to hold all of that data, but you had NES games that all had unique and interesting songs for each and every level (such as Mega Man 1-6.) You can't tell me that 5-6 midi versions of rock songs was the most you could fit on a cart! What about some Motorhead, Judas Priest, Iron Maiden, Dio, Stooges, Ramones, or Van Halen? I know licensing can be a beast, but a few more songs wouldn't have killed us. I remember even when I was a kid that eventually I turned the sound off - lest I have to hear a chiptune version of Paranoid for the 400th time. It's amazing that the one selling feature of this game turned out to be its one Achilles' Heel.

Final thoughts? Rock 'n Roll Racing is an above average racing game for the Super NES and Sega Genesis. Being a fan of the RC Pro Am series and other racing games where shenanigans and violence are equally important to skill, this is another fun entry into the battle racing genre. Are there more accurate and overall better racing games on the Super NES? Sure. Try Top Gear 1 & 2 on for size. However, for a fun, fast way to kill a weekend, I recommend Rock 'N Roll Racing.