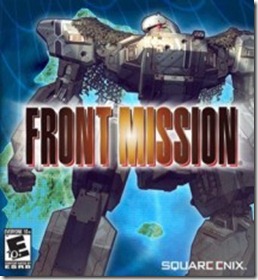 If you are reading this it is likely that you may not have heard of the Front Mission series as all of the games in the series have been poorly marketed towards North American’s. I’m not joking when I say this, a quick youtube search for NA Front Mission titles yields no results sans a trailer for Front Mission Evolved. If I were to tell you that of all the games in the series (there are five in the main series and about five more offshoots.) we’ve only received the following:
So how does that make you feel? I’m sure by now you have noticed a few blanks in that list and to most of the English speaking Front Mission fans chagrin it leaves many blanks as the story for the entire series of games was written long before the games were made, meaning that missing out on even one game leaves some fairly sizable holes. Due to the Serialized nature of the series not only were there the games but a novel and radio drama series all of which added to the overall story of the mainline Front Mission series. I’m not here to analyze the series though, I’m here to review a strategy game about flipping walking tank robots! 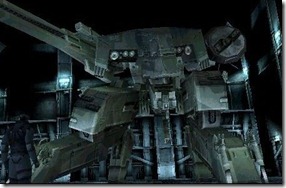 Awwwwwww Yeeeeeaaaaah!
Front Mission (or Front Mission First depending on localization) for the DS is a port of the first game which until recently was unreleased anywhere outside of Japan. Prior to the release of this DS port the only possible way of playing the game was to either import the game and play it in a modded or Japanese console or to download a translation patch for a rom of the SNES game and play it on an emulator. There were several downsides to playing an emulated version:

Royd is very angry in the fan translations.
The Story of this game isn’t told from the point of view of a single man, it is told from the perspective of two men from differing backgrounds and from two different forces. One man serves the Oceana Cooperative Union (OCU) is a supranational union of Australia, Southeast Asia and Oceania. The other serves the United Continental States (UCS) which is a Supranational consisting of all countries in North and South America. You can play either story right off the bat, the only difference between them (besides the story) is some minor gameplay elements and improved character portraits. 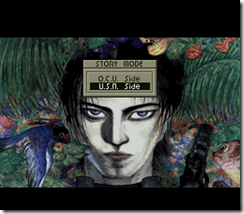 Choose your destiny!
The main story of Front Mission is the story of Royd Clive a soldier working for one of the worlds super powers the OCU. One day while on a recon mission to investigate a UCS warehouse with his fiancée Karen and his best friends Ryuji and OCU Soldier they experience strange goings on which result in Karen being kidnapped, and the warehouse being destroyed by a mysterious man. They are all blamed for the destruction of the Warehouse and are court martialed as political turmoil erupts into an all out war between the OCU and UCS. Meanwhile Royd, Ryuji, and OCU Soldier go there separate ways all wanting to find something to occupy their new free time with. Some time passes and Royd becomes a gladiator of sorts battling his Wanzer (It’s short for Wanderpanzer a German word meaning “Walking Tank”) for money in an arena. He is approached by a Colonel Olson of the OCU who gives him the opportunity to lead a mercenary group to aid the OCU. From there on it’s explosions, romance, existential crises, and  odd uses of the term “gaggle”. 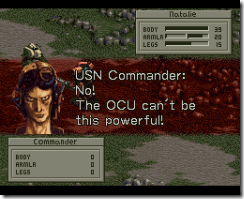 I’m sure he’s doing better then this guy.
The Second story of the game has you following the exploits of Kevin Greenfield a member of an elite unit called the Black Hounds operating under the UCS. He happens to fall in love with another member and because of this botches a very important mission and is stripped of his rank. Two fellow Black Hounds members he had befriended chose to leave the unit to follow Kevin and all three joined the regular standing army. While the OCU story follows Royd as he tries to find out who kidnapped Karen and oust the UCS from Huffman Island the UCS story follows Kevin as he attempts to weed out corruption in the UCS government while seeking the woman he fell in love with.
As I mentioned earlier the series was serialized long before it was made and was made to be one huge drama set in a contemporary setting. So I feel that this is a game series where it is worth mentioning that there are many drama bombs that get dropped almost as much as Skrillex drops the bass. This isn’t to say that it makes the games bad, the dramatic nature of them builds tension and in my opinion makes it more enjoyable as you are always wondering what is coming next. 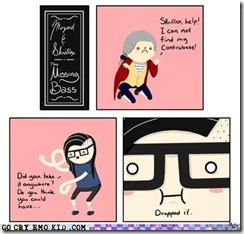 Sorry.
As a strategy game Front Mission is pretty straight forward you move your units around Pseudo-3D environments and you have two means of attacking the first is by attacking directly by moving up next to a unit and initiating a close range attack which can consist of attacking with a machine gun, a rifle, or punching the enemy until it dies. The other way of attacking is indirectly which is done with bazookas or missile launchers, the range of the weapons isn’t set and some have more or less range the others. Wanzers are made up of four components, legs, a right arm, a left arm, and a body all with there own set of hitpoints. There are three possible outcomes of any battle, 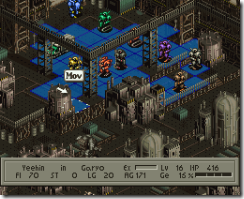 The Fields are pretty similar to those of the older Fire Emblem games.
The only possible way to destroy a unit is to destroy the body of the Wanzer. Generally this means attacking multiple times are Pilots lack any sort of precision and their hits land randomly, this can be remedied with skills which are learned by repeatedly attacking with a weapon or a certain type (i.e. Repeated attacks using a Machine Gun will yield a machine gun related skill). While you move your units around the map battles occur in a more personal manner. When you initiate combat you are brought close up to both units and watch them attack, or attempt to attack one another. The ultimate objective of every battle is to destroy all enemy units which is simple enough. 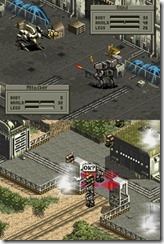 AIM FOR THE HEAD! …or is that for zombies?
Outside of the battles you can travel to and from any town you have been to and in these towns you can buy or sell parts and modify your Wanzers, battle in an arena for cash, talk to townspeople, and receive mission objectives. While this may seem silly at first at different times in the game events occur in these towns that can get you special Wanzer parts/weapons or can get you a new pilot to use, so exploration is encouraged as most pilots will require you to do something in order to get them to join you.
Like most strategy games your units are only as good as the equipment they carry, so Wanzer Customization is a major element of the game. Like I mentioned earlier a Wanzer is made up of four major parts a body, 2 arms, and a set of legs. You can combine any set of Wanzer parts as you please, do you want a Wanzer that is just one big gun? You can do that. Want a Wanzer who can shoot lots of missiles and move really fast? You can do that. Grappler arms? You can have em’. Besides being able to slap together whatever robot(s) you want you may want to change their load outs in order to better complete a mission. 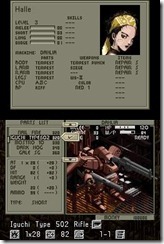 It’s usually best to build the Wanzer around the Pilots strengths.
Front Mission for the DS is a great turn based strategy game that I highly recommend to anyone who is either looking for a game that has a great story or happens to like any sort of strategy game. The game is fairly easy to learn and typically by the end of one of the campaigns you will have developed your own style of playing (like making all your units physical attackers and punching everything to death). The compositions for the game are top notch as is the art style, this is because Front Mission DS is actually a port of the PlayStation version so everything looks pretty good aesthetically. Overall Front Mission is a great game that everyone should get. So what are you waiting for gogogogogogogogogogo! You know you want to roll around in a spider-bot and blow stuff up.
Posted by Unknown at 7:49 PM