The 90’s was a good time for fighting games and saw the beginning of many popular franchises, Fatal Fury, Street Fighter, Tekken, and Virtua Fighter amongst them. Though have you heard of of this fighting game? 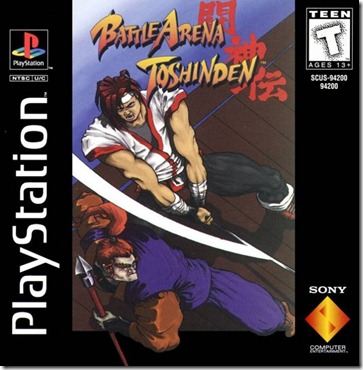 Oh god kill it with fire!

In all serious though (seriously how can’t you remember a cover like that?), Battle Arena Toshinden is an arcade style fighting game released for the PSX and Arcades in 1994. The game was for a while considered a must have game for the PSX and spawned three sequels and several ports to other systems. Today we will look at the Gameboy Port of the first game, though it is a port it is fundamentally the same game as the PSX and Arcade versions with the only notable differences being two extra unlockable characters that wouldn’t be fully explained until the sequel Battle Arena Toshinden 2. 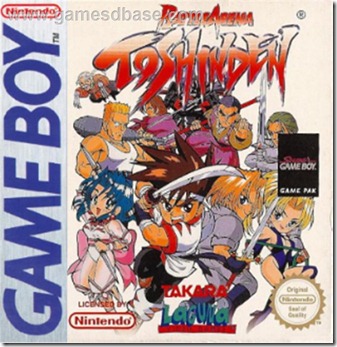 Wut? This is different.

The game and is a 2D fighter where you can choose from eight different characters along with four unlockable characters. Each character has its own unique move set and characteristics with the only truly balanced characters being the main protagonists Kayin and Eiji(seen center). Being that the gameboy has only two buttons aside from the D-pad and the start/select buttons attacking is entirely delegated to the A and B buttons; one button controls all punches and the other controls all kicks. By executing certain directional movements and pressing the appropriate attack button the characters can use special moves unique to that character, along with the special moves each character has a super move which can only be used when your character has less than 10% health. The game also features the ability to throw your opponents which is done by pressing forward and punch. Each match can be won in three different ways, via Ring Out, KO, or Time up. 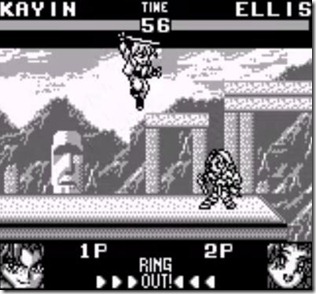 I am become death.

The sprites in the game are essentially chibi versions of the 3D models used in the PSX version. Surprisingly though the sprites are rendered very well and are quite appealing. The backgrounds as still images and change with each stage, however the fighting platform stays the same regardless. If one were to play this game using the Super Gameboy for the SNES you could play the game in pseudo-color where cut scenes were completely in color and battles were given a hue instead of being represented entirely in black and white (or sepia if you are using the Original Gameboy). You are also treated to a nifty little border around the game screen which is a nice feature that very few other games had aside from the Pokémon series of Games. 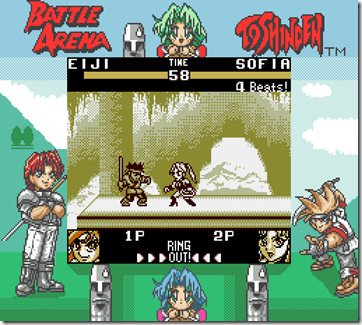 Eiji and Sofia getting funky.

Now for the game’s story. . . Its kind of bad. The story is essentially a condensed version of the PSX’s story but without proper context to allow a person new to the series any comprehension of what's going on. The overall plot of the game is that Gaia is hosting a tournament and is offering a fabulous prize to whomever can beat him, naturally this attracts a lot of attention and that’s where the game picks up. You choose a fighter and watch their story unfold through an opening cutscene and an ending cutscene when you beat the game. It would take a while to explain each persons story but here’s an abridged version of all of them:

Person has a problem, Person gets invited to tournament, Person decides tournament will fix problem.

That’s about it. Now what's really going on is that Gaia is the member of an illustrious quintuplet of awesome warriors and they are chartered to help this aforementioned evil organization. Gaia’s wife was supposed to become the new leader of the organization but the Organization didn’t want this duo having control of both groups so they tried to kill them. Gaia’s wife died and he and his young daughter survived; leaving her in an orphanage he starts the Toshinden tournament to find warriors who will help him take down the organization. That’s the plot of the game, which is poorly explained.

Now despite the poor story to this port the game has a very good fighting mechanic and even sports a multiplayer function which can be used with a link cable to play via two Gameboys, or a super Gameboy to play via your SNES. If you know the codes to the game than you can play as the extra characters and/or increase the difficulty or make the game easier. This is a solid game and definitely withstood the tests of time, the series may now be dead the games live on many different platforms. I’d suggest giving this game a gander as it’s a quick fighter that’s easy to pick up and play so long as you don’t expect to have tons of story thrown in your face. All in all it’s a good game and you should get it or at least try it.

To make it more difficult enter Up, Up, Select, A, Up, Up, B at the title screen.

To make it easier (able to use super attacks easily) press select three times when the Takara logo appears.

Beat the game on hard and it will give you the code to play as all the characters.