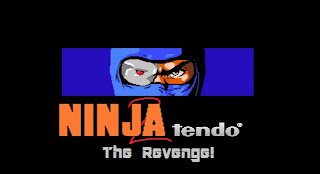 Many apologies for the hiatus since the last installment of Ninjatendo. Sadly, I was captured by a roaming clan of ninjas, hellbent on revenge for my disgraceful review and I barely got away with my life. I fought them off as bravely as a duck with a broken wing and a lame foot walking backwards on a conveyor belt. Tonight, we will tackle some of the highest highs and lowest lows of the US ninja releases for the NES. If you are interested in any of the games mentioned, feel free to click the links below the video. Enjoy.

One final honorable...or rather...dishonorable mention: Shinobi.
Where Teenage Mutant Ninja Turtles 2 and Legend of Kage are both excellent arcade ports, Shinobi leaves a lot to be desired. Which honestly is a shame, because arcade ports were the bread and butter of Tengen and most of the games they released for the NES were stellar versions of great games. Afterburner, Gauntlet, Fantasy Zone, Ms. Pacman - these are really great arcade ports that need to be played. However, this port of the 1987 arcade game is severely lacking. The graphics are subpar, the action feels sloppy and slow: in the arcade, Shinobi was an agile acrobat of a ninja - in the NES version, his attacks are clunky, stilted, and he is pretty much missing all of the stuff that makes him a ninja. he no longer LOOKS like a ninja, he doesn't rock the cool sword that he does in the arcade and Sega Master System versions: he just clumsily throws one sad throwing star at a time and hopes to save enough of those hostages to earn a bonus stage. It is one of the games on the list that I can safely say is better passed over. Perhaps I was clouded by nostalgia when I called it "Pure Ninja Awesomeness" back in February of last year...perhaps I was being tongue-in-cheek...the world may never know.