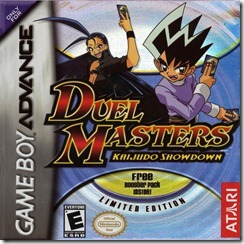 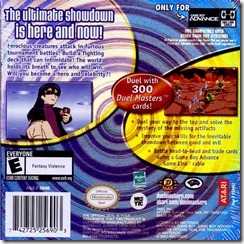 It also comes with a large bottle of industrial strength hair gel.

Disclaimer: This video game is based on a card game, so if you have no interest in card games then you may want to just skip this post. If you don’t care for any background info on the game or the series skip ahead two paragraphs.

For the uninitiated who person who had never heard of the show or read the manga (like myself) that it is based on it may seem like a generic slapped together half-assed attempt at pulling in children who are into Yugioh or the Pokémon Trading Card Game, I can assure you this is not the case. Surprisingly enough this card game has been around in Japan for over a decade but only reached stateside in late 2004 and was quickly discontinued in early 2006 after airing only two seasons and releasing only thirteen different card packs. Despite being discontinued a sizable number of people follow the Japanese card game and even banded together to make a forum which to this very day is still active. 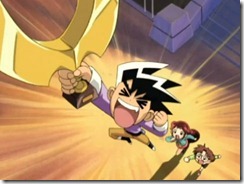 I’m certain this would be their reaction to the TCG making a comeback.

Duel Master’s can essentially be considered a simpler version of the card game Magic the Gathering, you have six different “Civilizations” (i.e. elements, or whatever) which are, Nature, Water, Fire, Darkness, Light, and Rainbow unlike Magic there are no Mana cards and instead at the start of every turn you can add any card in your hand to the Mana pool. You can then tap the aforementioned Mana to summon a monster or cast a spell. The game doesn’t have a life point system but instead has you use “Shields” to defend yourself once all five of your shields are destroyed by your opponent and they attack you directly you lose the game. To defend yourself the cards are broken up into groups and subgroups: 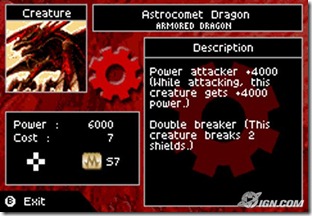 I like how the abilities are explain in such detail.

For a more in depth explanation of gameplay the Duel Masters wiki has an in-depth How-to guide on playing the game. 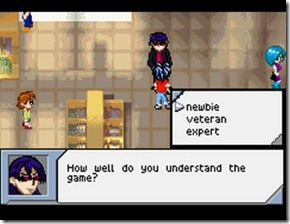 Because we all know that no one listens to the tutorial.

Duel Masters: Kaijudo Showdown has a very simple premise, you play as the game’s protagonist named “TOM” by default which from what I’ve gleaned through “extensive” wiki reading I can safely say is not from the show/manga’s canon. The game has a unique story in which you use a card game to save the world while attempting to win all of the tournaments to gain sponsorships and whatnot, all normal stuff thus far. Kaijudo Showdown sports the entire cast from the first season of the show/manga (which you can duel) and boasts a hefty 300 unique cards in the game. Premise-wise the game focuses mainly on the building of decks and just out and out dueling everyone as the reward for winning any duel is a pack of cards. Multiplayer is encouraged through the use of a link battle/trade system which is neat and adds replay value as constantly trying to outdo your friends decks is always fun.

The ultimate appeal of this game lies in the fact that the Card game is similar to that of Magic the Gathering meaning that anyone who has a passing knowledge of Magic can pick the game up with little trouble. Duel Maters Kaijudo Showdown has very little appeal to anyone who isn’t into card games, the sub-par graphic’s and soundtrack don’t help it out very much. I would advise fans of the show, or fans of card games in general to give this game or it’s sequels a look as they are fairly inexpensive and can provide loads of fun if you can get a couple of your friends together to play it with you. 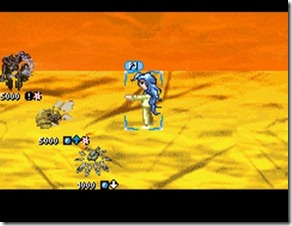 I can’t wait for the HD remake.