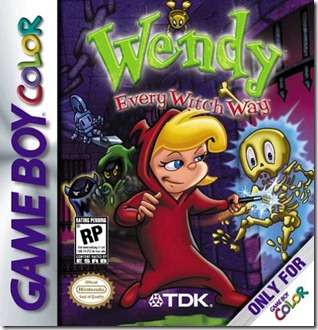 Wendy Every Witch Way is a slightly obscure gem by Wayforward Technology which along with another slightly less obscure game called Xtreme Sports both pushed the limits of the Gameboy Color with vibrant visuals and for the most part decent soundtracks. These two games took the regular conventions of a typical Gameboy Game (a basic sports game, or shooter) and polished those themes till they no longer looked anything like their predecessors. Now here is a link to some gameplay footage, you may be thinking, “Well that looks like any other skating game for the handheld!” You would be right in saying that instance made the game look like it was just a run of the mill Tony Hawk impersonator, but let me tell you this friend. Xtreme Sports had story. Yes dear reader you read that correctly the game had a viable story complete with cutscenes and an over world that could be explored. 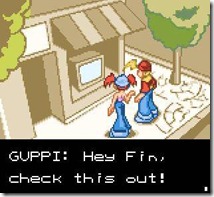 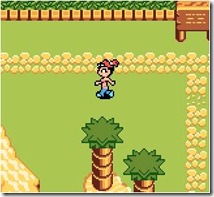 I’d compare Xtreme Sports to Mario Tennis, only more anime styled.
Whereas Extreme Sports was a unique sports game, Wendy Every Witch Way is part Space Shooter and part Plaformer. The game stars Wendy the Good Witch a character from a comic series of the same name owned by Harvey Comics. Contemporary Gamers may know her better from her guest appearance in the second Casper movie, Casper Meets Wendy. It is worth noting that both intellectual properties belong to Harvey Entertainment. Wendy Every Witch Way is essentially about Wendy finding an odd chest in her home, and being of the curious sorts she opens it releasing many large green orbs (which are moonstones if the manual is to be believed) which cause a Castle floating above her home to collapse due to these gems reversing gravity. Wendy possesses a standard attack from her wand which can be upgraded by collecting the numerous stars strewn about each level, she also has the capacity to reverse gravity as she pleases moving from the floor to the ceiling with ease. Gravity can be a cruel mistress as changing gravity will also have an impact on the environment as certain enemies and hazards will move with the change of gravity. 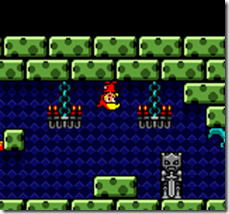 They are jealous of your mad Fred Astaire skills!
The game itself is broken up into 4 levels with 3 stages each, there are also 3 bonus space shooter mini-levels in between where you shoot enemies and collect stars. If you happen to beat the game with enough stars you are able to play through an additional series of stages through a rather crazy space stage. Each level of the game introduces a new concept you will have to overcome, the first level has you learning how to jump from the ceiling to the floor by altering gravity, the second has you dealing with stage hazards, and the third has you dealing with hazards and enemies that switch from the ceiling and floor, etc. You are eased into these over the course of the three stages so difficulty is never much of a problem even if you choose to be extra ballsy and selected hard mode at the start screen. 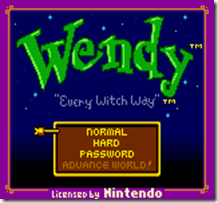 I’m not enough of a badass to even consider doing hard mode.
Control-wise Wendy Every Witch Way is a pinnacle for what any platformer should be as everything is responsive, the gravity altering is incredibly responsive as if you are quick enough you can continuously alter gravity in mid-air over and over keeping Wendy perpetually in one spot. The Attack is quick and can be upgraded by grabbing stars (Stars are also representative of your life as when you have stars you lose one of them instead of dying if hit). The space shooter mini-stages are interesting and control just like Gradius where you can move all over the screen and shoot forward. Just like in the regular stages grabbing stars upgrade your attack and you can’t alter gravity but you can flip Wendy over which makes moving up or down slightly faster depending on whether you are right-side up or upside down. 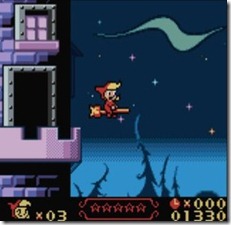 And she’s so damn happy about it!
The game’s graphics are very nice and the stages all have a great deal of detail, especially for a Gameboy Color game. If you have a minute (as I’m sure you do if you are reading this) then give this video a look. Did you watch it? Did you notice the detail put into the moving background, how about the little explosions when enemies are destroyed, or just Wendy’s movement? Don’t just take that little gameplay video as an example…

That’s a Screen from the transition screen before the first stage, just like Extreme Sports Wendy Every Witch Way pushes the limits of the Gameboy Color with it’s colorful and vibrant visuals. The sound for the game is also very nice with moderately catchy level tunes and even a simplistic voice for Wendy limited mostly to yelps from being hit and what not. Wendy Every Witch Way is a great game for the Gameboy Color and is a simplistic platformer that is insanely fun and has a good deal of replay value I highly recommend this game or any game by Wayforward Technology.
Posted by Unknown at 11:24 PM